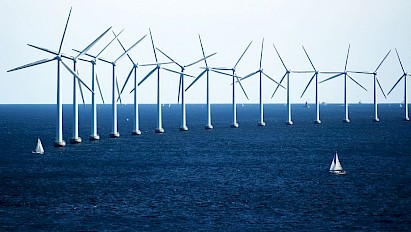 A Nova Scotia businessman who made his mark in the seafood business is eyeing the potential of converting wind on Newfoundland’s west coast into environmentally friendly hydrogen.

John Risley, chairman and chief executive officer of CFFI Ventures and former head of Clearwater Seafoods, says he has entered into an agreement with First Nations partners to acquire the Port of Stephenville, which would be used to ship hydrogen created in the province around the world.

The plan comes just weeks after the Newfoundland and Labrador government lifted a moratorium on privately owned onshore wind projects.

Wind can be used to create hydrogen through the process of water electrolysis, which could then be used as a source of fuel.

Risley, who also chairs Canada’s Ocean Supercluster, an industry-led group that pushes for innovation in the ocean-based economy, was in Stephenville last week to speak with local politicians.

He said Stephenville plays an important role in the plan — a deepsea port from which hydrogen can be shipped, but also an area that has an abundance of wind.

He said there is still a lot to figure out in the green hydrogen sector, with fundamental questions — like cost and investor interest — yet to be answered.

However, he believes Canada can be a leader in the field.

“There’s only one scaled green hydrogen plant under construction in the world today, and that’s in Saudi Arabia. And there’s a very good reason why there aren’t many. This is still early stages in the development of green hydrogen,” Risley said.

“At this stage, all we have said to the community and to governments at both levels is we’re working hard, we’re spending money, but we don’t know and we won’t yet until hopefully September or October.”

Newfoundland and Labrador Premier Andrew Furey, who also attended the conference in Halifax, wouldn’t comment on the potential sale of the Stephenville port, but said it’s exciting to see interest for wind energy production in the province.

“Europe and other areas around the world are transitioning away from petroleum products… A large portion of that will be replaced by hydrogen,” Furey said.

“Newfoundland and Labrador has an abundance of wind that can be used to drive the electrolysis process that creates hydrogen. We have an abundance of clean water…We have a workforce that is completely world-class when it comes to operating in a marine environment — and by the way used to transitioning from industry to industry — and we have the deepsea ports.”

Furey said Risley’s proposal isn’t the only one on the table in front of the province, adding, “the more, the merrier.”