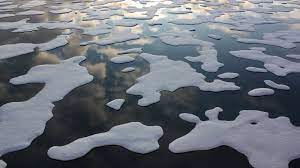 YOU MAY HAVE heard that the Arctic is warming more than twice as fast as the rest of the planet, in large part due to a gnarly feedback loop: As more sea ice melts, it exposes darker waters, which absorb more of the sun’s energy, further accelerating the melt. That’s wrong, as it turns out. Things are actually even worse.

Those underlying warming processes, known as Arctic amplification, are indeed happening. But their rate is far more catastrophic than scientists first understood. Thanks to a torrent of temperature data, by late 2021 researchers were estimating that the region is actually warming more than four times faster than the rest of Earth, with huge consequences for the whole planet.

And now, a June paper published by a separate group in the journal Geophysical Research Letters puts an even finer point on the problem, showing that over the last few decades, the Arctic hasn’t warmed at a consistent, predictable rate. “We have seen that these changes are not smooth, as has been believed until now. They occur basically in two discrete steps: one around 1985 and then around 2000,” says Petr Chylek, a research scientist at the Los Alamos National Laboratory and lead author of the study. “After this last increase in the year 2000, Arctic amplification is about 4.5 compared to two or three [times as fast], as it was before. So it is a significant change.”

That means that the scientific community and policymakers have been referring to figures that are far too low. “A lot of papers have been citing this figure of two times greater warming in the Arctic than the rest of the planet for a long time,” says climate scientist Lily Hahn, who studies the mechanisms of Arctic amplification at the University of Washington but wasn’t involved in the work. “So it’s nice to finally update this using the most up-to-date observations.”

What caused these sudden spikes in Arctic temperatures isn’t yet clear. But the first one in the 1980s was probably due to increasing concentrations of carbon dioxide in the atmosphere, Chylek says. The second spike around the turn of the century may have been due more to variability in the climate—for instance, changing ocean currents.

Scientists have a good handle on what’s causing the overall Arctic warming, though. Sea ice has a very high “albedo,” meaning it reflects a lot of the sun’s radiation. But the underlying seawater has a low albedo, meaning it absorbs that energy. (If you look at satellite images of the sea, it can be quite dark.) So as that ice melts, the albedo of the Arctic decreases, raising temperatures, which melts more ice. It’s a vicious circle.

“This albedo effect is really translated into melting of sea ice in the summer and early fall,” says Chylek. “Because of this evaporation of water, and because a larger area of water is open at that time, we get this water vapor into the atmosphere and formation of low-level clouds.” And clouds, as it turns out, also play a role in boosting temperatures. They bounce some of the sun’s radiation back into space, sure, but they also absorb some of it, like insulation. The low-level clouds stick around through the winter, trapping heat against the landscape. So even though in some parts of the Arctic the sun doesn’t come out at all during the depths of winter, warmer summers and autumns prime the coldest months to get hotter.

All the extra warmth of summer is also getting trapped in the Arctic Ocean, then released throughout the winter. “The greatest warming in the Arctic is happening in winter, which maybe surprises people, because you have the greatest sea ice melt in summertime,” says Hahn, of the University of Washington. “That’s when you have incoming sunlight. But the idea is that there’s seasonal ocean heat storage.” It’s like a giant radiator that warms up a room even after it’s been turned off.

Simultaneously, storms have been transporting moisture from lower latitudes into the Arctic, further encouraging the development of clouds. And injections of warmer water from the south, brought north by ocean currents, further melt sea ice. “As it melts, water evaporates and increases atmospheric humidity, which causes an increase in cloudiness in winter, and we have infrared radiation coming from these clouds to the surface,” says Chylek. “This is one feedback loop that can cause increased Arctic temperature, and we believe that it is one of the reasons why we see this increase in temperature around 2000.”

University of Washington climate scientist Cecilia Bitz, who studies Arctic amplification but wasn’t involved in the new research, points out that there has been a lag in how areas at high latitudes have responded to greenhouse gases, compared to the rest of the planet. It’s taken time for sea ice to melt, but now that it’s doing so, the heat feedback loop in the Arctic has worsened, and the rate of change has become much more noticeable. “The tropics warmed faster first, and now the poles are catching up, and that’s why you see a trend,” she says.

The consequences are already massive and far-reaching. First and foremost, more melting—particularly in Greenland, which is losing a quarter trillion tons of ice each year—means higher sea levels. Plus, warmer waters get physically bigger, a phenomenon known as thermal expansion, further raising sea levels.

The landscape is also suffering literal and metaphorical upheaval. Warming temperatures are thawing frozen soil known as permafrost. When that permafrost loses water, it collapses, dragging down any infrastructure in or above it, like pipelines, roads, and buildings. “There are people in the Arctic,” says Bitz. “They did very little to deserve to live in this environment that is dangerous.”

Skyrocketing temperatures are also greening that landscape. Shrub species are marching north, and the vegetation traps more snow against the ground. This prevents the chill of winter from penetrating it, potentially accelerating the thaw of permafrost. All that extra vegetation is also darker—just like how the sea itself is darker than its ice—and thus absorbs more of the sun’s radiation.

Simply put, the Arctic is descending into climatological and ecological uncertainty. “Each summer that my field research crew heads to the Arctic, we don’t know quite what to expect,” says Isla Myers-Smith, a global change ecologist at the University of Edinburgh, who wasn’t involved in the new research. “This year we arrived in Inuvik, Canada, in a heat dome with temperatures reaching 32 Celsius [90 degrees Fahrenheit], but out on the coast there was still lots of sea ice around, keeping temperatures much cooler locally.”

This kind of variability makes it difficult for models to pin down how the Arctic is changing, and to predict how those changes will go on to influence the larger climate system. That’s why it’s so important that scientists revise their understanding that the Arctic is actually warming more than four times as fast as the rest of the planet.

One major concern is the potential for the climate system to reach a tipping point, in which warming kicks off rapid change. If the Arctic warms enough, for example, melting in Greenland might quickly accelerate. “I don’t think it’s really precisely known—if these tipping points exist—what level of warming would trigger such rapid changes,” says Michael Previdi, a climate scientist at the Lamont-Doherty Earth Observatory of Columbia University, who wasn’t involved in the new paper. But, he continues, in theory a larger amplification factor “increases the chances of passing one of these tipping points.”