Why is Delhi's air quality so bad? 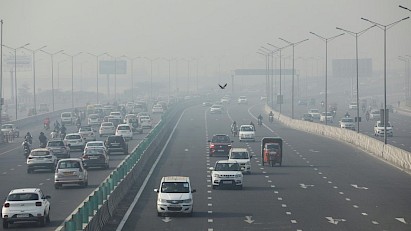 Delhi has suboptimal air quality all year round, but there are reasons why the conversation around pollution in the city resurfaces every winter.

In October and November, the months leading up to a chilly winter in most of northern India, Delhi and its surrounding region invariably get enveloped in a deadly mix of pollutants and fog that can cause severe lung disorders. Air quality dips, often in the red “very poor” and “severe” zones. The smog leads to watery eyes, migraines, and lung and heart diseases. Overall, in 2019 alone, 1.67 million Indians died and the country’s economy lost $36.8 billion because of pollution.

Delhi’s pollution is peculiar because it is caused by factors both local—and under the state government’s direct control—and from outside its territory. The extent to which each contributor impacts air quality changes with the time of the year.

If the covid-19 lockdowns in 2020 weren’t enough proof of the impact of emissions on air quality, a reopening economy has made it abundantly clear. Delhi and much of the Indo-Gangetic plain saw clear skies between April and June 2020. It was short-lived, though.

As industries reopened, traffic picked up, and coal-powered thermal plants in the areas surrounding Delhi began to function at full capacity, Delhi’s deadly winter haze was back.

While the supreme court has come down heavily on both the state and central governments this year for not finding lasting solutions to this problem, Delhi’s air had an odd silver lining.

Changing rain patterns meant a wetter-than-usual monsoon, which broke decades-long records and lasted well into September. This helped ground much of the particulate matter.

Yet, the festival season and a sudden increase in vehicular traffic—on some days, back to even pre-covid levels—contributed up to 50% of the pollution in the city, according to Delhi-based think tank Centre for Science and Environment (CSE).

It estimated that between Oct. 24 and Nov. 8, the weekdays leading up to and after the Hindu festival of Diwali, slow-moving traffic due to the festival rush caused an increased concentration of pollutants.

“​​While PM2.5 is influenced by several other factors, nitrogen dioxide (NO2) is more closely related to traffic trends,” the CSE’s analysis said. “During the study period, NO2 levels show a strong correlation with congestion. The levels increase when traffic speeds go down.”

But this particular analysis by CSE is limited to internal pollutants in Delhi.

Farm fires in the agriculture-majority states of Punjab and Haryana heavily impact Delhi’s air quality. Farmers in these neighbouring states switch from rice to wheat cultivation and need to clear the previous crop’s residual stubble.

Specialised machines for this are both expensive and time-consuming, especially for farmers with smaller holdings. This year was particularly tough with an extended monsoon narrowing the window further between wheat and rice.

The link between Delhi’s topography and pollution

Landlocked Delhi and its neighbouring cities are cursed with a specific post-monsoon phenomenon.

Wind speeds drop to a third of what they are during summer, putting the region into a virtual “air-lock.” While the wind blows from the west, bringing with it dust from India’s desert regions and depositing it over the Indo-Gangetic plain as it slows down.

Since both Haryana and Punjab fall to the west of Delhi, the wind also brings pollutants from the farm fires in these states into the city.

Wind patterns have also changed over the past few years, possibly due to the impact of climate change, Down To Earth magazine had reported in 2018. For this reason, winter in some years in the north registers more smog-filled days than before.

Weather forecast for the last week of November said wind speeds will pick up and improve Delhi’s air quality from “very poor” to “moderate.”

And once the stubble fires subside, air quality will become a conversation for the next winter.