Where Dalí once painted the sea, wind turbines are set to rise 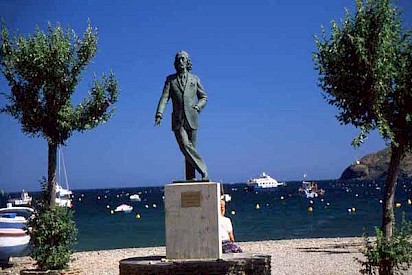 PORT LLIGAT, Spain — Moises Tibau clambered aboard his small wooden boat at dawn, pushing off from a craggy outcropping in front of the house where Salvador Dalí composed some of his most famous Surrealist paintings.

Mr. Tibau, one of the two remaining fishermen in this speck of a Mediterranean town about 100 miles north of Barcelona, was hoping for a haul of lobster, langoustine and scorpionfish. But as he slowly motored into an otherwise deserted bay, Mr. Tibau was preoccupied by the looming threat of modernization.

Government officials are set to approve construction of a huge floating wind farm just offshore, and international energy companies are already jockeying to harness the volatile northerly winds in the area known as la Tramontana.

The push comes as a deadly summer heat wave made worse by climate change is threatening to break temperature records in England and sparking wildfires in France, Spain, Portugal and Greece.

Dozens of turbines could soon be marching across the horizon, providing urgently needed renewable energy to Catalonia, a part of Spain that is still highly dependent on fossil fuels, but fundamentally altering the character of a region that has changed little from the time when Dalí walked the hills.

The contentious project on the Spanish coast is emblematic of a push-and-pull taking place throughout Europe as officials rush to reduce planet-warming emissions by phasing out fossil fuels and rapidly building utility-scale renewable energy projects. The war in Ukraine has added urgency to the effort, as European policymakers try to break free from their dependence on Russian oil and gas.

Yet from the coast of Spain to the rivers of Albania, efforts to deploy large wind, solar and hydroelectricity projects are running into roadblocks that include NIMBYism, environmentalist concerns and a bureaucracy that hampers quick action.

Complicating matters is the fact that big wind and solar projects require significant space — something that can be difficult to come by in Europe, a continent that also has thousands of years of cultural history and artifacts to contend with.

The rush to harness la Tramontana has emerged as the latest flash point in a growing debate over where to locate new renewable energy projects across Europe. Besides disrupting the views depicted in masterworks such as “The Persistence of Memory,” residents of this sleepy corner of Spain say the offshore wind farm would also spoil the views from Cap de Creus Natural Park, place enormous machinery perilously close to one of the biggest marine preserves in Europe, deter tourists from visiting the scenic town of Cadaqués and forever disrupt their bucolic way of life.

“As a local, I’m mostly concerned about the fishing, yes,” said Mr. Tibau, 59, who has been working the waters for decades and is opposed to the project. “But also about the cultural spirit of Cadaqués, the landscape that inspired Dalí.”

Similar stories are playing out around the continent. In northern France, scallop fishermen last year fired flares and blocked a boat that was working to install one of the country’s first offshore wind farms, and in Sweden there is resistance to a plan to build wind farms in a pristine area of wilderness.

Greek islanders are waging violent protests against a major wind farm that locals say would destroy old growth forests and disrupt tourism, while in Italy, a convoluted permitting process is hampering the ability of companies to build wind projects where they have already been approved.

Elsewhere in Spain, residents oppose plans for a huge solar plant in Andalusia that they say would disrupt an archaeologically sensitive site. And in Eastern Europe, activists recently won a major victory when the Albanian government agreed not to install dams on the Vjosa River for hydropower.

“Despite the overwhelming consensus that change is needed, if you talk to people, they just don’t want a wind farm next to them,” said Viktor Katona, an energy analyst at Kpler, a research firm. “The NIMBYism is definitely there, but it’s also the fear of the unknown, and it’s about a way of life.”

The vast majority of Europeans, including those in and around Port Lligat, support ambitious efforts to increase renewable energy.

“When I first saw it, I was supportive,” said Josep Lloret, a prominent marine biologist who teaches at the nearby University of Girona. “We need solutions to mitigate climate change.”

But as Mr. Lloret looked into the details and began to consider the effects on the ecosystem, he soured on the project.

“This is one of the most important areas of the Mediterranean Sea,” he said, noting that the European Union had recently designated much of the nearby area a marine preserve and that there is a nearby bird sanctuary on the coast. “It’s a hot spot of biodiversity.”

Other scientists are also concerned about the proposed wind farm. In a corner of a fish market in the nearby town of El Port de la Selva, Patricia Baena and Claudia Traboni, two marine biologists working for the Spanish government, were rehabilitating a type of soft coral that is often caught in fishing nets.

They say that while fishing in the area takes a toll on the coral, known as gorgonia, the effect of the wind farm could be worse, as the large underwater cables that anchor the turbines to the sea floor churn up silt and disrupt the fragile ecosystem beneath the waves.

“They are like trees in the forest,” said Ms. Baena. “If they disappear, then all of the biodiversity associated with them will disappear.”

Commercial fishermen, too, oppose the wind project, fearing that its construction and equipment, including electrical transmission lines, will push valuable red shrimp farther out to sea.

Guillermo Francisco Cornejo, 46, head of the fishing guild in El Port de la Selva, said with the cost to fish already high, the wind farm could make what is an already tenuous livelihood unsustainable.

“You need to sacrifice some parts of the sea,” said Mr. Lloret, the marine biologist. “But you need to find the places where you will do the least damage.”

The companies hoping to construct the wind farms say that their projects will be not significantly disrupt the environment.

“There is a climate emergency, and these kind of solutions are critical,” said Carlos Martin, chief executive of BlueFloat Energy, a Spanish company that plans to bid on the project later this year.

BlueFloat’s project would involve 35 turbines, each one towering 856 feet above the water, and produce about 500 megawatts of energy, enough to power about half of the energy demand for the local province, which has a population of about 750,000 people. Other companies are also preparing bids, some of which could involve more turbines. Government officials and the companies working on the projects say the location just off Port Lligat is the best one in the region for offshore wind because of the strong Tramontana winds.

Mr. Martin contends that the fact that wind turbines will be floating, rather than fixed to the sea floor, will reduce the long-term effects. And he said that while some impact on the environment was inevitable, the imperative to build new sources of clean energy outweighed such concerns.

“You can always see change as a threat,” Mr. Martin said. “But change can be an opportunity, and the opportunity here is amazing.”

As the war in Ukraine drags on, European leaders have moved to curtail imports of Russian oil and gas, and pledged to hasten the rollout of new renewable energy projects.

Yet with the war pushing up energy prices around the globe, European leaders are beginning to set aside climate goals and focus on reducing energy costs, reversing plans to stop burning coal and investing billions in new natural gas infrastructure.

And even as governments are racing to greenlight new projects, there is already a major gap between what has been approved and what is under construction as slow permitting, protests and environmental reviews lead to delays. Across Europe, governments have approved about four times as much wind power as is actually being built, according to Energy Monitor, a research firm.

“People don’t like coal and oil and gas, but they don’t want any other options,” said Mr. Katona, the energy analyst. “Government policies area still chaotic, and it’s going to be very hard to find the solution.”

As Mr. Tibau headed out to check the nets he had set two days earlier, a full moon still behind him at daybreak, he passed a rocky peninsula that inspired artists including Picasso, Man Ray and Marcel Duchamp. Atop a hill stood a lighthouse that served as the setting for the 1971 Kirk Douglas film “The Light at the Edge of the World.”

Finally, he arrived at his buoy and brought his boat to a stop.

Working alone, Mr. Tibau hauled up hundreds of meters of net by hand, tossing back protected sea cucumbers and smaller crustaceans. After a half-hour of work, he had a respectable catch: one large lobster, one scorpion fish and a dozen langoustine.

Later in the day, chefs from nearby restaurants would come by the shaded spot where Mr. Tibau mends his nets and buy the morning’s catch for about $175.

It is an arrangement that hasn’t changed much in a half century, when a previous generation of fishermen taught Mr. Tibau how to work this small patch of sea.

“If Dalí was still alive today,” Mr. Tibau said, “he would have the power to put an end to this project.”