What happens when solar gets much, much cheaper? 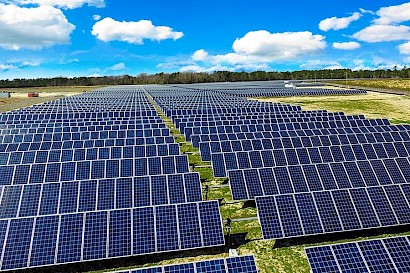 The plummeting price of electricity from solar panels is one of the driving forces aiding the transition to clean energy.

Government policies and scientific innovation around the world have helped to reduce the average cost of utility-scale solar power by more than 80 percent since 2010, making it the least expensive power source in many, if not most, places.

Now the Department of Energy has set a target of reducing the cost by more than half again by 2030, to an unsubsidized average of 2 cents per kilowatt-hour. That cost, which takes into account the price of construction and operation, would have seemed like a fantasy not long ago.

By taking the least expensive power source and making it much cheaper, the government would shake the foundation of many energy debates and help to hasten the transition away from fossil fuels.

But is the new goal achievable? To answer that, I went to Greg Nemet, a University of Wisconsin public affairs professor whose 2019 book, How Solar Energy Became Cheap, tells the story of how we got to this point.

“This really is an ambitious goal,” he said. “We might not meet it because it’s that ambitious.”

But the decision to prioritize this goal is a good one, even if success is not a forgone conclusion, he said.

For some perspective, the International Renewable Energy Agency listed 2 cents per kilowatt-hour by 2030 as the very lowest end of a range of possibilities in a 2019 report.

Nemet said it’s important to note, when talking about average prices, that the actual price would be lower in sunnier regions and higher in those that get less sun. The reason for the regional variation is that sunnier places can get more electricity per unit of system capacity than places with less sun. So solar panels are more efficient in, say, California, than they are in Seattle or Milwaukee.

But he expects that a continuing decrease in solar electricity costs will have the greatest effect in the northern, less sunny regions, because solar may not yet be the least expensive option there, and it would become the cheapest alternative, making projects more attractive to developers. 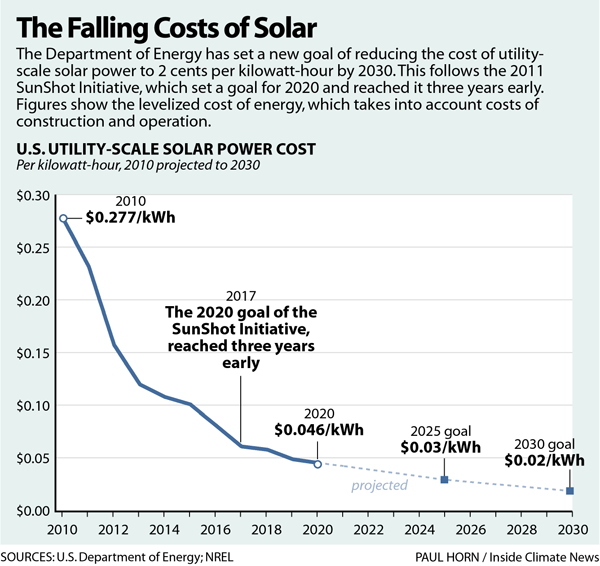 If solar is far and away the cheapest energy source, then some policy debates will likely shift to focus on how best to accommodate it, he said.

For example, there is an ongoing debate about how to meet the need for more interstate power lines to transport renewable energy from rural areas to population centers. The projects face years of bureaucratic delays and local opposition.

As the grid relies more on utility-scale solar, policymakers will need to work harder to reform the regulatory system to make sure interstate power lines get built, Nemet said. There also will be a premium placed on resources that work well with solar, like battery storage.

The United States has set goals for solar pricing before, and met them. The Department of Energy started the SunShot Initiative in 2011, with a target of reducing the costs of utility-scale solar by 75 percent by 2020.

A note about the numbers: The 2-cent goal is not the cost of electricity, but the “levelized cost of energy,” which is based on a formula that includes the costs of construction and operation of a power plant. Estimates of the levelized cost can vary. The government is using a formula developed by the National Renewable Energy Laboratory.

When I say the 2030 goal is for a cost that is less than half of what it is currently, that’s based on the NREL estimate that the 2020 levelized cost was 4.6 cents per kilowatt-hour.

In announcing the goal last week, the Energy Department also had details on $128 million in funding for new solar energy initiatives.

“This first burst of funding will help us add even more affordable clean energy to the grid, jobs to communities across the country and will put us on the fast track toward President Biden’s goal of 100 percent clean electricity by 2035,” said Secretary of Energy Jennifer Granholm, in a statement.

The department said utility-scale solar could represent 30 percent to 50 percent of the electricity supply in 2035, which would be an increase from the single digits today.

I write about this stuff all the time, and sometimes get desensitized to the scope of what’s happening. But the department’s announcement is one of those moments that calls attention to where we are and where we may be going. The transition to clean energy is accelerating, and reducing the costs for solar power is a way to make things move even more quickly.