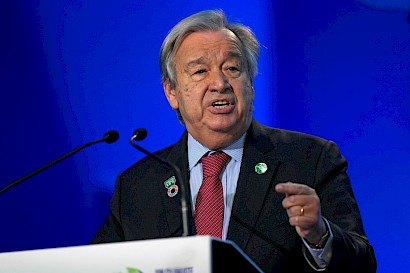 The head of the United Nations on Monday warned that the world is “sleepwalking to climate catastrophe,” as the ongoing pandemic, the war in Ukraine and a lack of political willpower undermine humanity’s efforts to slow the warming of the planet.

“There is no kind way to put it,” U.N. Secretary General António Guterres told attendees of the Economist Sustainability Summit, saying in prepared remarks that the most ambitious goal of the 2015 Paris accord — to limit Earth’s warming to 1.5 degrees Celsius (2.7 Fahrenheit) above preindustrial levels — is slipping away.

“The 1.5-degree goal is on life support. It is in intensive care.”

Guterres said the scientific implications of climate change are clear, and so is the math: To have a chance of avoiding global warming’s most ruinous impacts, the world must cut greenhouse gas pollution nearly in half by 2030 and erase its carbon footprint entirely by mid-century.

But that aspiration remains far from reality, as global emissions rise and national climate commitments lack the ambition that scientists say is necessary to abandon the age of fossil fuels as rapidly as possible.

“The problem is getting worse,” Guterres said Monday. “If we continue with more of the same, we can kiss 1.5 goodbye. Even 2 degrees may be out of reach.”

In Glasgow, Scotland, in the fall, world leaders emerged from two weeks of high-profile talks with an agreement intended to strengthen near-term climate goals and hasten the transition away from fossil fuels. They promised to cut emissions of methane, a potent greenhouse gas, and to halt deforestation. They vowed to phase out financing for coal plants, and to do more to help nations grappling with the deadly combination of climate change, mounting debt and a deadly pandemic.

But four months after those pledges were made in the glare of the international spotlight, what Gueterres called the “naïve optimism” of that moment now seems distant.

The world remains on track to blow past its current climate goals. Developing nations buffeted by inflation, massive debt and the ravages of covid-19 have little capacity and scarce resources to adapt to mounting climate impacts.

The fallout of Russia’s war in Ukraine risks upending global food and energy markets in ways that have serious implications for climate change, Guterres warned. “As current events make all too clear, our continued reliance on fossil fuels puts the global economy and energy security at the mercy of geopolitical shocks and crises.”

As Europe and its allies seek to curtail their reliance on Russian oil and gas, he said, they must continue to prioritize the transition to clean energy instead of locking in new fossil fuel infrastructure for decades to come. “Short-term measures might create long-term fossil fuel dependence,” Guterres said.

In the United States, where President Biden has pledged to cut the nation’s emissions at least in half by 2030, greenhouse gas emissions surged last year. Democrats on Capitol Hill have so far failed to revive the climate provisions of a roughly $2 trillion package that includes about $300 billion of tax credits for wind, solar and nuclear energy producers and other incentives in the face of opposition from Sen. Joe Manchin III (D-W.Va.) and congressional Republicans.

While Biden has taken numerous executive actions to try to nudge the nation toward a greener future, his ambitious climate goals and promises to send billions annually in climate financing to vulnerable nations are unlikely to succeed without help from Congress. His agenda also faces a difficult test in the Supreme Court, which is weighing a case that could curtail the authority of federal regulators to alter how the nation’s power sector produces electricity.

Other countries have not fared much better. Deforestation persists in Brazil, Indonesia and elsewhere. Major emitters of methane, including Russia and China, have yet to join a global pledge to swiftly cut the amount of the planet-heating gas being released into the atmosphere.

The world has already warmed more than 1 degree Celsius (1.8 degrees Fahrenheit) since the late 1800s, with few signs of slowing. Scientists have said that warming could pass the 1.5-degree mark early in the 2030s without transformational changes to how humans work, eat, travel and power their homes.

In a detailed and alarming assessment last month about the deepening impacts of climate change, the Intergovernmental Panel on Climate Change said humanity has a “brief and rapidly closing window” to avoid a hotter, deadly future.

But that report carried a message that Guterres echoed Monday: that the world can still pursue a less catastrophic path. That some climate impacts are unavoidable, but humans can still prevent many future disasters because the amount that Earth ultimately warms depends on the choices that we make now.

To meet the goals of the Paris agreement, Guterres said, public officials and corporate leaders must accelerate the phaseout of coal power and wholeheartedly embrace renewable energies. Governments must strengthen their national climate plans. Rich countries most responsible for fueling climate change must live up to promises to help smaller, poorer nations adapt to its impacts and build more sustainable economies. And the world must figure out had to rapidly decarbonize major sectors such as shipping, steel, aviation and cement.

“That’s how we will move the 1.5-degree goal from life support to the recovery room,” he said.