This Could Be The Big One for the Middle East

Last week, Iranian officials announced to the world they would answer any American-led economic sanctions with an embargo of their own: the shutdown of the Strait of Hormuz.

On Christmas Eve, the saber-rattling escalated another notch when the Iranian navy launched a ten-day exercise within these waters to illustrate just how quickly and easily they could shut down this heavily-trafficked passage to the Persian Gulf. 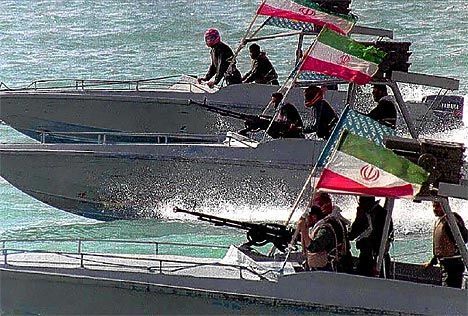 Just yesterday, Iran’s Navy Commander Admiral Habibollah Sayari further reinforced the point he’d been making for the last week by claiming that this mission would be as easy as “drinking a glass of water.”

The American response came swiftly and definitively, with the United States 5th Fleet stating that such actions will not be tolerated.

The reason this threat had such immediate effect on our own policymakers becomes clear with one look at a map of the region: 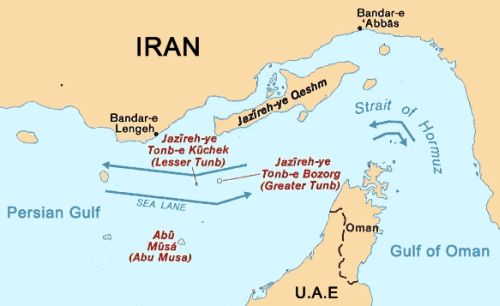 More than 15 million barrels of Middle Eastern oil pass through the Strait of Hormuz daily.

As a natural choke point between Iran, Iraq, Saudi Arabia, Kuwait and open water, the Gulf of Hormuz can be used to control shipments between four of the world’s top 12 oil producers and their customers across the globe.

Here are some key strategic facts about this twisting stretch of sea between the Persian Gulf and the Gulf of Oman:

The implications here cannot be overstated.

With close to half a trillion dollars in oil and natural gas passing through this narrow body of water annually, the world’s fourth-largest oil producer has found a unique and frighteningly effective way of declawing any attempts by Western powers to project their influence on Iran’s internal policy.

Many have already compared this move to the July 1941 cessation of oil exports from the U.S. to Japan, an American response to aggressive Japanese military expansions into China and French Indochina in the late 30s and early 40s. Every December 7th, Americans still remember the result of that hardball diplomacy.

But this time, it’s not the Japanese Empire — but the American Empire that finds itself on the verge of losing access to its lifeline.

In the last 20 years, no Muslim nation has fared well when oil — and U.S. access to the commodity — was put into question.

And it appears that with this latest development — and the public naval exercises which are taking place as you read this — that pattern of forced ‘regime change’ might be furthered yet again.

In the coming weeks, issues such as Iran’s highly controversial nuclear program will take a backseat to the very question that’s been plaguing the U.S. since domestic oil production peaked back in the 1970s…

Where will we get the fuel which makes our nation run?

As inevitable as another armed conflict with a nation whose government is ideologically opposed to everything we hold dear, I would like to remind everyone that at least as far as the question of oil is concerned, maybe another war is truly unnecessary.
You see, while the world watches and waits to see if this powder-keg will finally explode…

While we sit and wonder who’s going to fire the first shot, and whether that shot will be a nuclear-tipped one…

There are people hard at work to make sure that we never need to depend on things like the Strait of Hormuz, Iran, or any Middle Eastern oil-peddling nation ever again.

Not far from North Dakota’s western border sits a small town by the name of Williston.

With a population of barely 15,000, this outpost of two- and three-story buildings, along with several others like it dotting the region, produce as much oil every day as the nation of Australia.

If this hunk of the American Great Plains were a nation unto itself, it would rank 29th among global oil producers.

Daily output is expected only to rise from here on out, reaching close to a million barrels per day by the close of the decade. Of course, this is a far cry from the 15.5 million barrels that pass into the Persian Gulf every day…

But what’s happening in Williston is just a symptom of America’s new industrial rebirth.

As the first major oil power to see its production levels wane, American oil has been fighting an uphill battle since traditional, easy-to-access oil reserves began going dry in the 70s.

Many have viewed this as a sign of decline…

But while a new guard of oil suppliers emerged in the Middle East, American energy companies have spent the last 40 years figuring out new ways of getting to the less easy-to-access oil.

The quest has been long, hard, and full of pitfalls and setbacks. But the mastery of techniques like horizontal drilling and hydro-fracking are starting to pay off.

Today the biggest and most important innovations since the first oil wells popped up in the American West more than 120 years ago have firmly taken hold, reversing the general trend of American oil production decline: 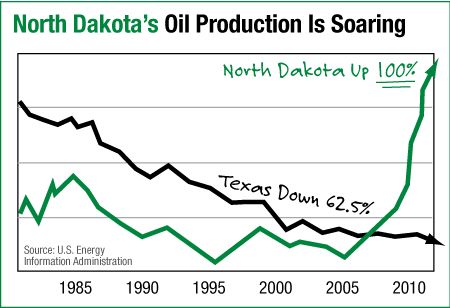 The long-term fruits of this of these non-traditional methods of fossil fuel recovery are almost unimaginable.

With new techniques and discoveries opening the possibility of more oil than ever before — as much as 1.7 trillion barrels in North America — it is not just possible, but very likely that issues such as the one currently unraveling in the Middle East might very soon become a thing of the past…