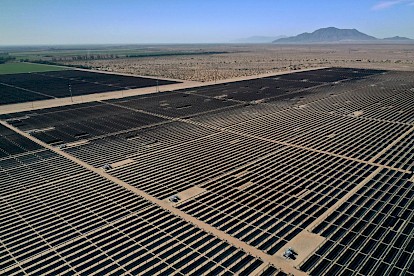 The Biden administration greenlighted a major new solar development in May. The Crimson Solar Project will stretch across 2,500 acres of public lands in the desert of Southern California and provide enough electricity to power 85,000 homes.

The 350-megawatt photovoltaic facility takes the country another step toward meeting the administration’s stated goal of slashing greenhouse gas emissions in half in the next 10 years. A White House statement in April proclaimed that when it comes to tackling climate change, “The United States is not waiting, the costs of delay are too great, and our nation is resolved to act now.”

Already Biden’s team has approved the first utility-scale offshore wind project in the Atlantic and taken a big step in the more complicated effort to develop wind energy in the Pacific Ocean’s deeper waters.

Expect the pace of new renewable energy projects — including utility-scale solar like Crimson — to continue to accelerate. That’s a good thing — except when this urgency collides with the glacially slow pace of life in desert ecosystems that haven’t experienced much previous construction, roads or other development. There, researchers say, we may need to proceed with more caution and more information.

“In the desert, you’re really talking about going into an undeveloped ecosystem,” says Steven Grodsky, assistant unit leader of the USGS New York Cooperative Fish and Wildlife Research Unit and a professor at Cornell University. “And anytime you have a major disturbance in an ecosystem that has a generally low frequency of natural disturbance, you might shake things up a bit.”

Grodsky and colleagues have spent years researching how solar projects could affect soil, plants and animals in the Mojave and Sonoran deserts. Some of that research has been published, more is forthcoming, and much, much more is still needed to better understand how the region’s ecosystems will fare.

“All of those [greenhouse gas reduction] goals entail really aggressive buildouts of renewable energy, which is a great thing in the sense that we can supplant and displace fossil fuels,” he says. “But that also gives us an opportunity to be able to guide the sustainable development of these renewables.”

And to do that, we’ll need to better understand how solar developments may affect various plants and animals.

Long-lived and slow-moving, the desert tortoise is perhaps the poster child for the pace of life in the desert — and an example of the threats that disturbances can cause.

Road-building, urban development, livestock grazing and off-road vehicles have devastated the tortoises, which spend a large chunk of their 80-year lifespan in burrows. The combination of threats has led to the Mojave Desert tortoise (Gopherus agassizii) being listed as threatened under the Endangered Species Act.

Now more solar development, and the bulldozers and fences that come with it, have added another threat. And it’s one that will be felt by more than just tortoises. The area is also home to burrowing owls, kit foxes, desert iguanas, kangaroo rats, and hundreds of rare plant species.

Grodsky is currently conducting a study on federal land run by the Bureau of Land Management in the Riverside East Solar Energy Zone, an area designated for large-scale solar development about 250 miles east of Los Angeles in the Sonoran Desert. “We are working to get a better understanding of how the solar facilities might affect animal movement and their use of corridors,” he says. “So things like desert kit foxes, coyotes, bobcats, badgers.”

He and colleagues have already been studying the interactions between pollinators and plants, including queen butterflies (Danaus gilippus) and Mojave milkweed (Asclepias nyctaginifolia), in other areas with solar developments.

“What we found so far is that solar development is likely affecting soils, which is in turn affecting where and how Mojave milkweed can grow, which is affecting butterfly species that lay eggs on, and have caterpillars that eat, Mojave milkweed,” he explains.

A lot of the research is ongoing, and findings are preliminary, but one thing is clear already: Disturbing desert soils is a big deal.

“If you disrupt soils and then remove vegetation, that can have effects on ecosystems,” he says. “The more intensive the disturbance of desert soils and plants, you’re really opening up an opportunity for invasive species colonization.” So solar developments could stamp out native plants and also cause invasive ones to proliferate.

How the sites are prepared for development can make a difference in the ecological impacts. Some sites are bulldozed. That’s the worst-case scenario for all native plants.

Other times plants are mowed, which can be less disruptive. But it really depends on what’s growing.

Cacti and Mojave yucca (Yucca schidigera) respond poorly to both those scenarios. “In our study, we found seven years after site preparation they hadn’t recovered,” says Grodsky. Creosote bushes (Larrea tridentata), however, appear to grow back after they’re mowed, but it takes a while. Again, desert life is slow.

Site preparation isn’t the only factor that can affect soil and plants. A study led by Karen Tanner of the University of California, Santa Cruz examined how the shade and runoff from solar panels affect common and rare plant species. The seven-year investigation found that in good rainfall years the shade suppressed plant growth for the rare Barstow woolly sunflower (Eriophyllum mohavense). In contrast, additional runoff from the panels increased the population of the common Wallace’s woolly daisy (E. wallacei), which was unaffected by the shade.

“There’s a need to reconcile rare species conservation and green energy goals, and our work highlights some pitfalls that can hinder effective management of rare plant populations in the desert southwest,” the researchers concluded.

It’s possible that tweaking some of the way solar facilities are constructed and managed could aid more plants and animals. Preliminary research suggests that leaving some habitat patches within solar projects could have positive conservation benefits.

“I think that there could be alterations to the design of desert solar facilities, the spacing between individual arrays, and the creation of habitat passes within solar fields at varying sizes,” says Grodsky. “If we are going to put solar facilities in these ecosystems, let’s try to make sure they have the least impact on soil, plants and animals.”

At a solar facility built in Nye County, Nevada in 2017, fences around the property’s perimeter were built with openings in places to allow desert tortoises and other species to pass through and access the habitat within the development. Panels were also placed 18 inches higher off the ground than the industry standard to better help vegetation return.

“Research and monitoring studies are underway to investigate the ability of native plants to persist under solar panels and how well the project area functions as habitat for wildlife,” according to the Fish and Wildlife Service.

Other projects are experimenting with combining pollinator-friendly plants and solar projects to create more ecological benefits.

Of course there’s another option for reducing the harm to desert ecosystems from solar development — don’t build there in the first place.

A 2107 study led by Madison Hoffacker of the University of California, Davis focused on other options in California, including using the built environment — such as solar panels on existing rooftops, arrays on salt-affected lands that can no longer be used for farming, and “floatovoltaics” on the surface water of reservoirs.

The researchers found more than 3,200 square miles of available surfaces in just California’s Central Valley that would be good for solar development and not in conflict with agricultural uses or protected conservation areas.

“There’s this competition for finite land resources between all these competing land uses, including renewable energy development, agriculture, conservation and urbanization,” says Grodsky. But finding ways to co-locate projects for multiple benefits or using marginal lands could help reduce the need to dig up more of the undisturbed desert.

Inevitably, though, more solar projects will be built in the desert, and it will be important to understand where they’ll have the least impact and how to best manage them with desert species in mind, he says.

“Now’s the time for researchers in the ecological community to do our part, to conduct the research and to ensure that the development is as informed as possible about the ecological effects,” he says.

That will take buy-in from developers, incentives, policy and much more funding.

There’s also a disparity when it comes to timing. Life and science move slowly in the desert, but progress does not.

“Renewable energy development is growing faster and faster,” he says. “But scientists need to go and collect field data for at least a couple of years to get anything worthwhile, and then you have to analyze it and write it up. So you’re talking about four years, and within those four years you could have another 20 large-scale solar facilities built.”

Trying to ensure research and information keeps pace with development will remain a challenge. But more and more companies are realizing that building projects sustainably is better in the long run, he says. That may be because of better PR, lower mitigation costs down the road or environmental ethics.

“But I do think that in the end, the most sustainable solar energy development will end up being a win for everyone,” he says. “Industry, the general public and natural resource managers will all benefit.”