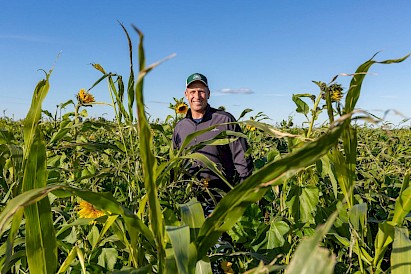 Eight years ago, Kevin Prevo started making changes to the land in southern Iowa that his family has farmed for five generations. Mr. Prevo stopped tilling the fields between crop cycles and started planting cover crops he does not harvest — a mix including rye, turnips, radishes and sunflowers — between rotations of his cash crops, corn, soybeans and rye.

The changes were intended to help the soil hold additional water and to prevent erosion, leading to more abundant yields, but have the added benefit of drawing more carbon dioxide into the ground and keeping it there.

Then, in 2019, Mr. Prevo met a representative from Indigo, a Boston-based agricultural technology start-up that pays growers for carbon credits that result from implementing climate-friendly practices like the ones already in use on his 1,400-acre farm. The Prevos rely mostly on manure from the hogs they raise to fertilize their fields; last year, with guidance from Indigo, they stretched it further, enabling them to eliminate the use of synthetic fertilizer, one of the largest sources of greenhouse gas emissions in agriculture.

That change is expected to generate several hundred carbon credits for the farm, which Indigo has contracted to sell for $27 a piece to buyers, such as JPMorgan Chase, Shopify and North Face that are looking to counteract their greenhouse gas emissions.

“It’s showing a lot of promise in terms of keeping yields the way they were and saving us on nitrogen costs,” said Mr. Prevo of the farm’s new fertilizer regimen. “We’ve always thought about cutting back, but this pushed us in the right direction.”

Indigo is one of at least a dozen entities at work on systems to pay farmers for reducing the use of carbon-intensive nitrogen fertilizer, planting cover crops to draw carbon dioxide into the soil and avoiding the tilling that releases it back into the atmosphere. Using a mix of on-the-ground soil sampling and predictive modeling, Indigo says it can determine how much additional carbon a farm has sequestered, or abated, by changing its practices. Each metric ton of carbon removed from the atmosphere, or avoided, generates one carbon credit.

Carbon offsets have been around for more than three decades, but demand for them has grown in recent years as companies faced increasing pressure to demonstrate a commitment to climate action.

According to the conservation nonprofit Forest Trends, in 2016, less than $200 million was invested globally in voluntary carbon offset purchases, which typically finance projects such as planting or protecting forests, capturing methane from landfills and mineralizing carbon; this year, for the first time, the figure is expected to top $1 billion.

Farmland is a new entrant in the offset conversation, but it has quickly piqued the interest of corporate buyers, especially those with agricultural products in their supply chains.

“It tells a great story, if you can tell Americans buying a product that their dollars are going to an American program that benefits farmers,” said Chris Harbourt, the global head of carbon for Indigo.

Global cropland has the potential to sequester as much as 570 million metric tons of carbon per year, according to one estimate, and experts say enlisting it to store greenhouse gas emissions will be essential to heading off the worst effects of climate change. But the same experts caution that substantial challenges — some that apply to any nature-based carbon offset, some of which are specific to farmland — must be met before compensating farmers for carbon capture becomes a robust market.

One fundamental concern is the accuracy of today’s estimates for soil-based carbon removals. Unlike with forestry projects, where the physical chemistry of carbon storage is better understood and predictive models have benefited from years of real-world data, how carbon accumulates in soil is still something of a black box. It can vary substantially based on composition, geography and depth, and there’s a relative scarcity of historical sampling data.

“Taking meter-long soil cores on hundreds or thousands of acres, it’s really onerous,” said Giana Amador, the co-founder and policy director of Carbon180, a climate policy nonprofit. Over a dozen different protocols have been developed for generating ag-based soil credits, and they vary widely in how much physical sampling is called for (or even whether it’s required at all). Ms. Amador says that to accurately evaluate soil carbon content, rigorous on-the-ground sampling is a must.

Another issue is permanence. Offsets are sold on the promise that carbon will be stored for decades, but agricultural decisions are made annually, based on a complex set of market and environmental factors.

“If you do ‘no-till’ for one year, but the next year you switch back, the carbon dioxide is released, and the climate value is effectively zero,” said Jonathan Goldberg, the chief executive and founder of Carbon Direct, which advises large corporations on their carbon management strategies.

Indigo, which will follow a protocol in development by the Climate Action Reserve, a leading offset registry, deals with this uncertainty by pooling credits together and holding back a portion of them as a buffer against future practice reversals (a similar strategy is used in forestry projects, to cover illegal logging or fires).

Proving that the carbon farms sequester would otherwise remain in the atmosphere presents a thornier challenge. Because carbon offsets counterbalance emissions occurring elsewhere — effectively giving their buyer a license to continue to pollute — it’s important that they represent carbon capture, or abatement, that wouldn’t have taken place in the absence of the payment. Today’s protocols use a variety of approaches that aim to screen for this “additionality” and avoid paying for practices farmers have always used.

Gradable Carbon, a new product from the start-up Farmers Business Network, will credit changes implemented up to two years before enrollment; Bayer, the German conglomerate that owns agriculture brands such as Roundup, pays farmers for beneficial practices adopted as far back as 2012. Others, like the new standard in development by the Climate Action Reserve, will count select farming practices that store more carbon than common practices in the local region.

Danny Cullenward, the policy director at Carbon Plan, a nonprofit that evaluates climate solutions, points out that none of those standards guarantees carbon storage that is truly new and motivated by an offset payment.

Like all carbon offsets sold on voluntary markets, farm-based offsets are unregulated; there is no legal standard for what constitutes a credit, which has led to a wide range in quality. According to Dr. Cullenward, buyers looking for unimpeachable agricultural credits — where the carbon sequestration is real, additional and permanent — will need to push projects toward more rigorous standards and should be prepared to pay significantly more than the $15 to $30 that the market demands.

That’s because truly additional, permanent storage of carbon may be at odds with other financial considerations that govern how farmland is managed. Practice changes like reducing fertilizer inputs and tillage can cut crop yields, for instance.

“You’re making maybe $20 an acre, at the most, and a 20-cent increase in corn will have more impact on your economics than the credits,” said Jim Bunch, a co-founder of Impact Delta, which advises investors on their environmental and social impact.

Chris Lehe, a farmer in Indiana, is working with Indigo to generate carbon credits for the no-till practices he uses on some of his 4,800 acres. Mr. Lehe has been experimenting with cover crops, too, but after three years, he’s weighing whether to continue. Planting them costs him $40 per acre, more than the practice is likely to generate in carbon credits.

“You’re going to have a hard time convincing people to switch to cover cropping for the purpose of the carbon market,” Mr. Lehe said. “Our margins are tight as it is, and I don’t think the amount of income right now is enough to incentivize guys to change the way they’ve been farming for decades.”

Despite all these obstacles, corporate interest in farm-based offsets has remained steady. Boston Consulting Group, which has pledged to reduce its net emissions to zero by 2030, has been among early purchasers. In a statement, the company says it believes that soil-based offsets hold promise and that investment and clear demand signals are necessary for standards and practices to improve.

Mr. Goldberg of Carbon Direct said that he had helped clients buy soil-based offsets, but only from sources where there’s a clear path to improvement in standards and protocols.

“Where we need to be for climate and carbon removal, none of the verticals on their own will be sufficient,” he said. “We don’t have enough forests, and we don’t have enough ability to change soils. All of them need to work, and they all have different trade-offs.”