The Brazilian Amazon is burning, again 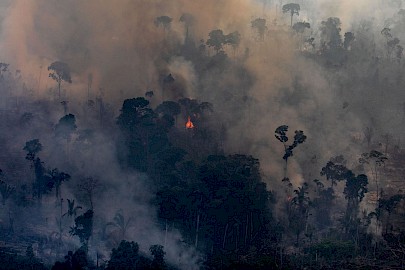 In recent weeks, nine major fires have ignited in the Brazilian Amazon, heralding the start of another fire season which, after a particularly dry year, experts say could be a bad one.

The first major fire of the year occurred on May 19, near the border of Serra Ricardo Franco State Park in the state of Mato Grosso, Brazil along the southern edge of the Amazon, according to Amazon Conservation Association’s Monitoring of the Andean Amazon Project (MAAP).

So far, all nine of this year’s fires have occurred in the state of Mato Grosso and have averaged around 200 hectares (494 acres) each, an area the size of the Principality of Monaco.

All of the fires occurred on previously deforested land, emphasizing the, “very strong link between recent deforestation and fire in the Brazilian Amazon,” Matt Finer, senior research specialist and director of MAAP told Mongabay.

In the Amazon, forests are often cut during the wet season (December through April) and burned during the dry season (between May and October). This slash-and-burn cycle approach is often favored by land grabbers, farmers, and landowners converting the land for sale and for agribusiness use, particularly cattle pasture.

Another series of satellite images (below) demonstrates this pattern clearly. Roads are constructed, opening the area to deforestation during the wet season of 2020, and a fire is set to clear the land of biomass on May 26, 2021.

In 2020, more than 2,500 major fires burned across the Brazilian Amazon between late May and early November, according to MAAP. Although the majority of the 2020 fires burned on cleared lands, a startling new trend emerged—more than 41% of major fires occurred in standing Amazon rainforest.

Fires do not occur naturally in the Amazon rainforest. Specific conditions are necessary for fires to burn in a standing forest, namely a dry year alongside lots of ignition sources on neighboring lands. These sources, almost exclusively caused by humans, can arise from runaway agricultural fires, or from blazes set intentionally to clear land following deforestation, much of it illegal.

MAAP estimates that nearly 2.2 million hectares (5.4 million acres) of the Brazilian Amazon’s standing rainforest burned last year, an area roughly the size of the country of Wales in the U.K.

Looking ahead to the remainder of 2021, Finer says, we can expect to see patterns similar to last year in the Brazilian Amazon, with fires burning in recently deforested areas early in the season (June through August) and a possible shift to fires raging in standing forests as the dry season intensifies.

On-the-ground fire monitoring, control, and the capacity to prosecute those who set illegal fires has been limited in recent years. Those limitations will likely continue, as the intentions of government and law enforcement agencies (such as IBAMA) to protect the forest have been largely defunded under Brazil’s current administration. At the same time, the pro-agribusiness and anti-Indigenous rhetoric of Brazilian President Jair Bolsonaro has emboldened land grabbers and ranchers to clear and burn more forest, encroaching into protected areas and Indigenous territories.

“What’s happening is that people feel that nothing is going to happen to them if they burn, and then they burn,” said Maria Silva Dias, an atmospheric scientist at the University of Sao Paulo in an interview with Reuters. “It’s not just climate…it all depends on the law being enforced.”