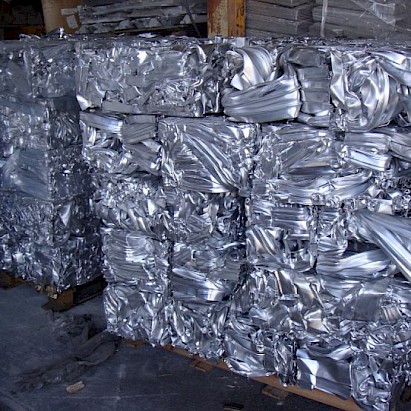 Aluminum scrap markets in North America were characterized by oversupply leading up to the pandemic. But aluminum scrap’s fortunes started to change in the fall of 2020. By the end of the year, aluminum scrap dealers were saying they could all but name their price and that prompt delivery appointments were readily available.

Aluminum’s recent strength could be further supported by a global green energy transition.

As Julian Kettle, senior vice president and vice chair of metals and mining at U.K.-based Wood Mackenzie, states on that research and consultancy group’s website, “Metals will play a starring role in the energy transition.” He cites aluminum, cobalt, copper, nickel and lithium as being the most vital metals because of their roles in key components used in electric vehicles (EVs), battery energy storage, wind and solar technology and electricity transmission.

Kettle adds that aluminum demand will increase by about a third by 2040 as a result of the green energy transition.

According to the World Bank, this transition will require more aluminum than any other metal, with green energy technologies requiring almost 6 million tons of the metal each year by 2050. The primary application for aluminum is in frames for solar modules.

The metals and mining industry will need to invest heavily to meet the needs of the energy transition, Kettle writes, though he also notes that existing production methods would contribute 12 billion metric tons of carbon to the environment by 2040.

“Without economic, timely, reliable and sustainable metal supply, the pace of the energy transition will be inhibited,” Kettle writes. “But scrap could provide a solution—provided the right incentives are in place.”

Kettle says increasing the use of scrap in aluminum production is “the first logical step on the road to decarbonization,” adding that scrap smelting facilities are less capital-intensive than primary facilities.

“In the world where all available scrap is used, secondary scrap processing capacity for aluminum would need a near threefold increase on what we have today at a cost of around $15 billion,” according to Kettle, who adds that such an investment “won’t happen without significant stimulus” in the form of policy incentives.

Aluminum’s use in vehicles also is increasing as the industry attempts to meet emissions and fuel consumption goals. A study by DuckerFrontier, headquartered in Washington, notes that North America’s light vehicles’ aluminum content is growing, particularly as demand favors light trucks and EVs.

According to the study, flat-rolled sheet for auto body applications will be the primary area of growth, followed by platform aluminum high-pressure die castings. By 2026, net aluminum demand is expected to increase to 514 pounds per vehicle as aluminum use increases for all vehicles using aluminum in closures, body-in-white and chassis applications to meet long-range CO2 goals as well as the ramp-up of electrified powertrain and battery-electric vehicle platforms that use more aluminum sheet, extrusions and castings for mass savings to achieve range targets.

While aluminum, and likely aluminum scrap, appears poised for increased demand in the future, China’s recent changes to its import regulations for nonferrous scrap metals should have a more immediate effect on scrap demand.

North America was oversupplied in aluminum scrap prior to the pandemic in part because of changes to China’s scrap import policies in the second half of 2019 that restricted the import of scrap under HS code 7602000090. In 2018, China imported more than 2 million tons of aluminum scrap under the HS code 7602. In 2020, that volume declined to roughly 909,407 tons as noted by Andy Home in a Feb. 9 article for Reuters.

As of November 2020, “furnace-ready” aluminum scrap is no longer subject to import restrictions in China. However, given lingering uncertainty surrounding customs agents’ interpretation of these new regulations, some U.S. scrap dealers have expressed hesitance about shipping material to the country. Also, rising ocean freight rates and limited container availability have hindered exports, as have the strong Midwest premium, which makes it difficult for overseas buyers to compete on price.

Matt Kripke, president of Kripke Enterprises Inc., a brokerage firm based in Toledo, Ohio, says export demand “had kind of a moment five or six months ago when the Midwest premium dipped.” However, as that premium has strengthened, it has been hard for export buyers to pull aluminum scrap out of the U.S. because they cannot be competitive on price.

As of March 16, the U.S. Midwest aluminum premium reached a more than two-year high, Fastmarkets AMM reports. That publication assessed the aluminum P1020A premium, delivered duty paid Midwest U.S. at 19 to 20 cents per pound March 16, an 8.33 percent increase from Friday, March 12, when it stood at 17.5 to 18.5 cents per pound. Fastmarkets AMM reports that the premium has risen 18.18 percent since the start of March.

The Midwest premium is rising as scrap appears to be in short supply within the U.S.

As of early March, a contact with a scrap processor that has operations in the Midwest and South says, “It doesn’t seem like there is enough scrap. All the rolling mills are busy and in need of scrap. Secondary smelters are the same.”

He says demand is strong for most aluminum grades, with the exception of aerospace alloys, and he expects the tightness in supply to linger through the second quarter.

“Spreads are very tight and there seems to be a shortness of scrap,” Kripke says, noting that demand for coil, billets, slab and cans has exceeded the pace of scrap generation.

“It’s hard to tell if demand is that strong or if the supply is that weak,” he adds. “You can sell anything you can get your hands on. You can name the price if you have material.”

Kripke says he doesn’t believe the semiconductor chip shortage, which has affected some automakers’ production schedules, is a factor in that reduced supply or is likely to reduce aluminum demand significantly this year. “If you asked me that 30 days ago, I would have said yes. Today, I’m not sure we are going to see it.”

The scrap processor says he believes Ford and General Motors have been hit hardest by the semiconductor shortage, adding that his company doesn’t do much business with those automakers. “Toyota hasn’t been much affected.”

Reuters reports that Toyota developed a business continuity plan after the Fukushima disaster that requires suppliers to stockpile from two to six months’ worth of chips, citing four sources. This requirement has allowed the automaker to remain largely unaffected by the global shortage of semiconductors.

According to press reports, Hyundai also has a stockpile of chips, allowing it to maintain its vehicle production.

As of March 11, Kripke says the North American market is 30 to 60 days away from reaching equilibrium between supply and demand. At that point, he says, he expects spreads to begin to widen.

Some of that future scrap supply is likely to come from the winter storms that hit much of the country in February. Kripke says he expects damaged gutters and downspouts will need to be replaced in Texas, particularly, where ice and snow are rare, saying, “A lot of scrap will hit the market.”

That also will increase demand for 3105 aluminum, he says, which he describes as “already strong.”

Kripke speculates that aluminum could be in short supply because scrap yards might be more focused on processing their ferrous scrap, given the rising demand and pricing for that material, and neglecting their aluminum. “Some yards may have unprocessed material on the ground,” he says.

The volatility in copper pricing also could be playing a role, Kripke says. “Processors don’t want to take a chance sitting on inventory if the price swings downward,” he adds.

Prompt deliveries are readily available with aluminum consumers, as many avoided locking themselves into contracts because spreads had widened so much in recent years, sources say.

However, the scrap processor with operations in the Midwest and South says his company has engaged in more contracts this year. “In 2020 we did virtually none because the spreads were so wide,” he says, adding that “spreads seemed historically reasonable, so we went back to our historic mix.”

Kripke says the change in spreads since the start of the pandemic has been “very, very dramatic.” He adds that when it comes to secondary grades, including aluminum radiators and old cast, “If you own it, you can name your price.”

He continues, “2018 was a year when to call it a buyers’ market would have been an understatement. That started to shift in the second half of 2020.”

The processor says he would like to see better balance between supply and demand. “I’m not sure how long that is going to be.”