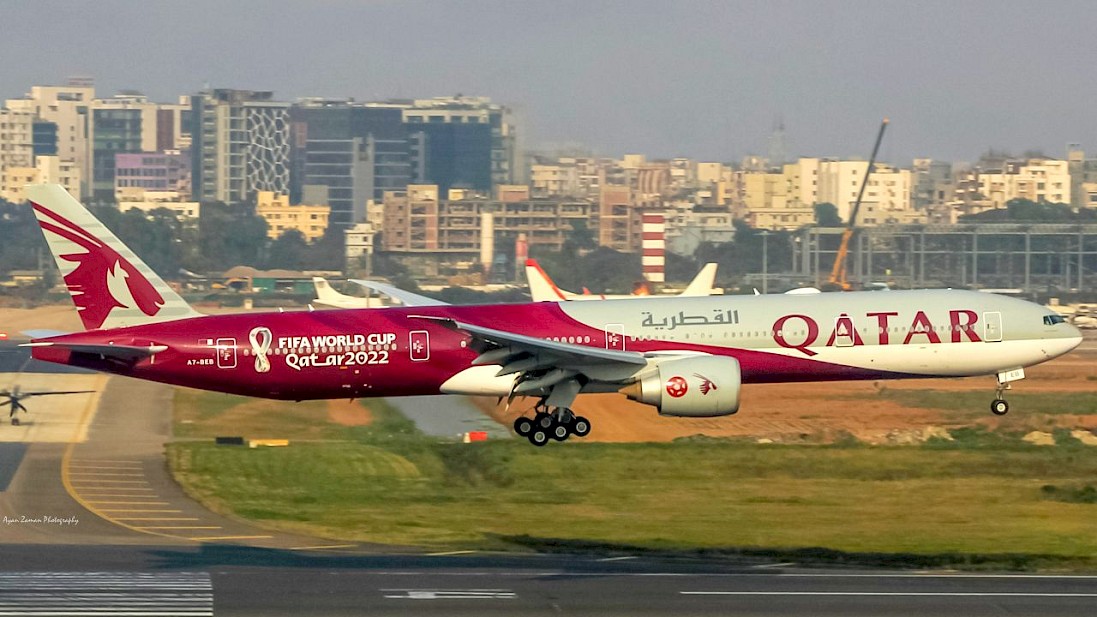 Qatar’s upcoming World Cup has already been a human rights disaster, as the rapid construction of multiple stadiums has caused the reported deaths of 6,750 migrant workers since 2010 when FIFA awarded the tournament to Qatar. And there’s yet another controversial issue for soccer fans to face: its devastating environmental impact.

Wherever they take place, World Cups generally produce high emissions due to the construction of stadiums, hotels, and updated infrastructure—plus the air travel of soccer teams and millions of spectators from around the world. But Qatar is claiming its November tournament will be the first-ever carbon-neutral World Cup. In response, an anti-carbon advertising campaign has conferred on the organizers of this year’s Men’s FIFA World Cup an ironic Bad Sports Award because of its greenwashing. The campaign calls Qatar’s claims dubious, casts doubt on its offset programs, and criticizes its fossil fuel sponsors.

Run by British think tank New Weather Institute, Badvertising is a campaign that pushes back against the advertising of fossil fuels and other high-carbon projects. It has recently started to highlight how these are promoted in sports advertising, which can be even more effective because of fans’ emotional connection to their teams, according to Freddie Daley, a research associate at the Centre for Global Political Economy at the University of Sussex.

The New Weather Institute’s inaugural Bad Sports Awards are a way of “making entities look as silly as they are,” says Daley, who’s also involved with the Badvertising campaign. New Weather Institute received nominations from across the world—everything from hockey franchises in North America to rugby teams in Australia. But the judging panel, which included climate scientists and advocates, decided to extend the most prestigious award—the overall winner of the Bad Sports Awards for Greenwash and Sportswash—to FIFA and the Supreme Committee for Delivery & Legacy, the body responsible for the infrastructure and operations of the event.

Greenwashing, in which companies overstate or mislead the public about their sustainability credentials or commitments, is common across industries. Sportswashing, meanwhile, is when companies (or countries) try to use sports to improve tarnished reputations.

Qatar’s—and FIFA’s—reputations have rightly taken a drubbing due to human rights violations. In the lead-up to the World Cup, the country had hired 2 million migrant workers from such countries as India and Bangladesh; nearly 7,000 reportedly died. Not to mention, Qatar has a record of discrimination, including against gay people; LGBTQ fans have been warned to exercise caution if traveling to the event.

It’s effective for maligned entities to sportswash because sports are so universally enjoyed—especially the World Cup, which is expected to have a viewership of 5 billion this year, equivalent to almost two-thirds of the world’s population. And those millions of spectators might think they’re watching a sustainable World Cup because Qatar has claimed it will be carbon neutral. It’s the “biggest stage of world football,” Daley says. “People live for it. For [Qatar] to say, ‘We’ve got this emissions thing under control’ is really damaging.”

The ads shown to the billions of spectators will only add to this cognitive dissonance. Official sponsors include state-owned QatarEnergy, which is set to spend $56 billion to expand gas fields. It’s also responsible for the North Dome gas field, which stretches from Qatar to Iran—and is almost as big as all existing gas fields combined. Other high-emssions sponsors include Qatar Airways and Hyundai.

On top of the ads, the infrastructure to host a World Cup is incredibly polluting, making the carbon-neutral claim virtually inconceivable. Qatar’s Supreme Committee has built seven new stadiums, as well as airports, railways, highways, and accommodation, totalling about $220 billion. In its accounting, the country also didn’t include the travel of about 1.2 million supporters, nor the expansion of airline services by about 75% during November and December, including Qatar Airways’ threefold increase between Sao Paulo, and fivefold between Madrid.

The country has announced ways in which it will offset its carbon emissions from hosting the World Cup, primarily through a carbon credit marketplace, which will invest in renewable projects. But a May report from Carbon Market Watch, which outlines why Qatar is not on track to reach carbon neutrality, says it would need to buy 3.6 million or more credits to offset all the emissions. (It estimates the country will emit 3.63 million metric tons of pollutants in preparing for and hosting the World Cup.)

Qatar has also built the largest tree and turf nursery in the world in the desert, a “carbon sink” to suck up and sequester atmospheric carbon. But the report says it will be 200 to 300 years before the turf farm mitigates carbon in any real way.

Via email, a spokesperson for Qatar’s Supreme Committee confirmed that they still expected the World Cup to be carbon neutral and noted additional ways they were achieving that: the small country won’t require fans to take internal flights, as World Cups traditionally do; travel will rely on a metro system and 800 new electric buses; and they’ve built an 800-megawatt solar power plant that will live on far beyond the tournament.

They also touted the carbon credits, and said they had now secured at least 1.5 million credits, adding that any offset discrepancies will be filled once the tournament is over. The spokesperson pushed back on critiques, saying Qatar’s move to “proactively offset carbon emissions … should be recognized rather than criticized.”

Still, external groups have their doubts. Daley says the aim of the awards is to raise awareness about the polluters, comparing them to the original sportswashers: Big Tobacco, which used to advertise heavily at sporting events until public perception changed and advertising regulations increased. World Cup hosts, and FIFA itself, could certainly rethink advertising from fossil fuel-linked companies.

But all sponsorships aside, it’s difficult to put on a sustainable World Cup; emissions from past tournaments have averaged 2 million metric tons. “Elite sport, it’s fundamentally unsustainable,” Daley says. But Qatar’s false claims make the situation worse. “They go unchallenged, and then they use this framework for future tournaments,” Daley says. If future hosts continue to make the same claims, there’ll be no environmental progress.

At its inaugural awards, Badvertising also bestowed other prizes, including to Premier League powerhouse Manchester City. The team has encouraged fans to recycle their bottles at the stadium in exchange for airline points with its sponsor, Etihad Airways, a huge carbon emitter. A round trip flight from Manchester to Dubai, where Etihad is based, produces approximately 1.8 metric tons of emissions.