Monster Australian solar farm about to get ‘significantly bigger’ 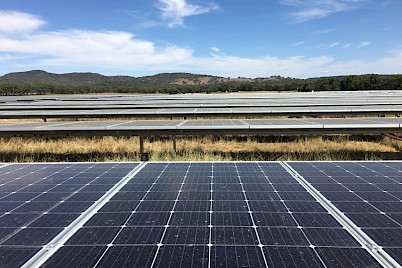 The $22 billion solar farm backed by billionaires Mike Cannon-Brookes and Andrew Forrest to supply Darwin and Singapore with power is about to get even larger.

“We have expanded the scale of the project,” Mr Griffin told The Sun-Herald and The Sunday Age. “It’s a reflection of just better serving those markets.”

Sun Cable’s existing proposal is already ambitious, including supplying Darwin via a 750-kilometre transmission link from the solar farm from 2026.

By the end of 2028, the company is aiming to have three gigawatts of readily dispatchable power and meet as much as 15 per cent of Singapore’s electricity needs via a 3750-kilometre underwater cable.

“We’ve barely begun” as an industry, he said, adding that most solar farms are now just in the hundreds of megawatts in size.

Sun Cable was launched in late 2019 with an initial investment of less than $50 million. Mr Cannon-Brookes and his wife Annie were “lead investors” via their family firm Grok Ventures, while Mr Forrest tipped in funds from his Squadron Energy company.

While the news on the climate front is often grim – see the latest Intergovernmental Panel on Climate Change report – advances by renewables and other technologies that can replace greenhouse gas emissions provide reasons for optimism.

Australia receives an average of 58 million petajoules of solar radiation annually, a 2018 government estimate showed. The energy falling on a solar farm covering 50 kilometres by 50 kilometres would be sufficient to meet all of Australia’s electricity needs, it said.

By contrast, burning all of Australia’s coal, oil, gas, uranium and other non-fossil fuels would provide a little more than one-tenth of the amount of solar energy we receive every year for free, a separate government survey showed.

In order to improve the efficiency of Sun Cable’s proposed giant solar farms, the company has teamed up with the University of NSW-based Australian Centre for Advanced Solar Photovoltaics (ACAP).

“We are interested in every incremental increase in efficiency we can find,” Mr Griffin said.

Renate Egan, a senior ACAP executive, said her group would start with identifying the best investments for modules and installation of the array itself.

ACAP will also develop an open-source model with data publicly available by mid-2022 to help spur projects to be built by other operators.

Solar farms use cells capable of converting about 20 per cent of the radiation into electricity, while new rooftop solar units are reaching efficiency levels of about 24 per cent. Research at ACAP and elsewhere is pushing those levels up and a 30 per cent rate by 2030 is possible, Dr Egan said.

The potential for a series of monster solar farms developed for Australian conditions means the scale could become large enough for more of the manufacturing to be done locally.

“If we back ourselves, other things will flow,” Dr Egan said.

The advance of solar energy also means there will be less need for exported fossil fuels, including Australian coal.

Increased concern in the region about climate change threats as well as a recognition that carbon tariffs on trade are likely in the future will result in fewer new coal-fired power plants being built and an acceleration of the closure of existing ones, he predicted.