Barely a year after the Korea Superconducting Tokamak Advanced Research (KSTAR) broke one record for fusion, it’s smashed it again, this time holding onto a churning whirlpool of 100 million degree plasma for a whole 30 seconds.

Though it’s well short of the 101 seconds set by the Chinese Academy of Sciences earlier this year, it remains a significant milestone on the road to cleaner, near-limitless energy that could transform how we power our society.

Here’s why it’s so important.

Deep inside stars like our Sun, gravity and high temperatures give simple elements such as hydrogen the energy they need to overcome the repulsion of their nuclei and force them to squeeze into bigger atoms.

The result of this nuclear fusion is heavier elements, a few stray neutrons, and a whole lot of heat.

On Earth, scooping together a Sun’s worth of gravity isn’t possible. But we can achieve similar results by swapping the crunch of gravity for some extra punch in the form of heat. At some point we can even squeeze enough heat from the fusing atoms to keep the nuclear reaction going, with enough left over to siphon off for power.

That’s the theory. But getting that insanely hot plasma to stay in place long enough to tap into its heat supply for a sustained, reliable source of energy requires some clever thinking.

The KSTAR is just one of a handful of test facilities around the world attempting to iron the kinks out of a plasma-wrangling technology called a tokamak.

Tokamaks are essentially large metal loops designed to contain clouds of hot, charged particles. Being charged, the moving cloud generates a strong magnetic field, allowing it to be pushed into place by a counter-field. 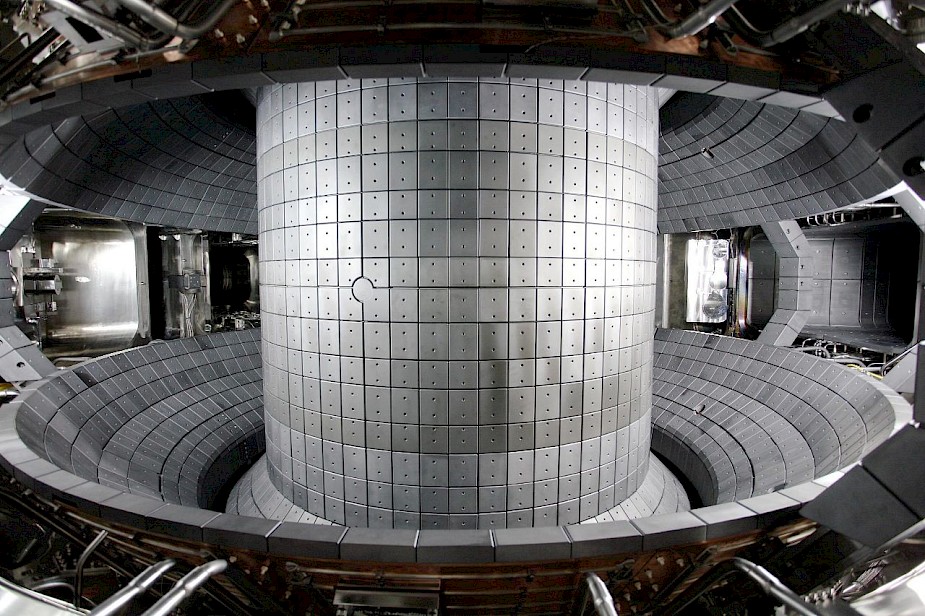 The trick with tokamaks is to fine-tune the current in such a way that it doesn’t slip free of its magnetic confines. This is easier said than done, as heated pulses of plasma aren’t so much tornadoes of particles, as unstable, churning maelstroms of chaos.

Try to contain a loop of jelly inside a ring of rubber bands to get a sense of the challenge.

There are various other ways to achieve similar results. Stellerators, like Germany’s Wendelstein 7-X test-device, flip the script and use a highly complex, AI-designed tunnel of magnetic coils to keep its churning loop of plasma in place, for example. This promises a longer hang-time, but makes it a little harder to heat the plasma.

Tokamaks, on the other hand, have been hitting bigger and bigger temperatures the past few years.

China’s Experimental Advanced Superconducting Tokamak (EAST) reactor in Hefei became the first to hit a significant temperature landmark of 100 million degrees Celsius back in 2018, a temperature that’s still out of reach of stellerators (for now).

This year, EAST heated plasma to 120 million degrees Celsius, holding it for more than a minute and a half.

Those temperatures, however, were a measure of the energy shared among its electrons. Hot, no question, but getting the temperature of the much heavier ions to increase is also important. Not to mention harder.

The KSTAR hit 100 million for its ion temperature last year, maintaining the pulse for 20 seconds.

Every test facility does things a little differently, using variations on the technology to push the limits on anything from pulse duration to stability to electron or plasma temperature.

While it’s tempting to see each record as a competition, it’s important to celebrate every milestone as one more lesson learned.

Every achievement shows others ways to deal with the hurdles we still face in harnessing the Sun’s engine into a powerhouse on Earth.