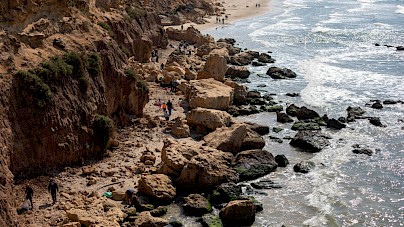 The Israeli government placed a gag order Monday on a joint Israeli-European investigation into an unprecedented oil spill that has washed dozens of tons of tar onto Israel’s 100-mile shoreline and has caused potentially irreversible damage to ecosystems and wildlife.

Israel’s Nature and Parks Authority has called the offshore oil spill “one of the most serious ecological disasters” in the country’s history and has estimated that the cleanup could take months, if not years.

The first reports of the oil spill came amid a winter storm on Wednesday, as powerful waves washed up thick black tar to the shores of Rosh Hanikra in northern Israel. However, it later came to light that the government had received warnings of an oil spill near Israel’s northern shores at least several days before.

Israeli officials have said the spill from a crude oil tank might be traced to vessels operating illegally in the Mediterranean Sea.

“They either spilled the oil from the ship into the water, or a malfunction occurred and they did not report it,” said Environmental Protection Minister Gila Gamliel. “Finding those responsible for the disaster is a complicated process, but we will do everything in our power to find those culpable.”

Jonathan Aikhenbaum, the director of Greenpeace Israel, said the unusual move to place a gag order on the details of the investigation fits with a “history of the Environmental Protection Ministry withholding critical information from the public, which can lead to the creation of conspiracy theories.”

“But Greenpeace, other environmental organizations, academics and many Israelis are following this very closely, so, at the end of the day, the truth will come out,” he added.

Authorities reported on Thursday that a young, 55-foot-long fin whale washed up dead on the Nitzanim beach in southern Israel after it had ingested black tar. Six baby sea turtles have also died of tar poisoning, while six others have since been rehabilitated.

“Without care, none of the turtles would have made it,” said Yaniv Levy, the manager of the National Sea Turtle Rescue Center at the Israel Nature and Parks Authority. “They all came with tar all over their heads and a large part of their bodies. They have tar in their eyes, mouths, nostrils and digestive systems. We were able to remove 99 percent of it.”

Over the weekend, thousands of volunteers helped to clean the beaches. The Nature and Parks Authority called on people to stay away, saying that “cleaning requires the use of appropriate protective equipment to maintain health and the orderly evacuation [of the remnants] to a suitable site.”

The government has also advised people against using the entire stretch of Israel’s beaches for bathing, sport and leisure until further notice.

The long-term damage from the spill is unknown, though experts have warned that the tar pollution could break down into invisible particles that can be absorbed into the air and drinking water.

“Even if they manage to clean up what is visible on the surface, a large part of the pollution can sink to the bottom of the sea,” Ilana Berman-Frank, head of the School of Marine Sciences at the University of Haifa, told Channel 12 news. “Our form of energy use must change.”

Aikhenbaum said that the oil spill was “a wake-up call for an Israeli government that has been heavily investing in oil and gas infrastructure that threatens our climate and sensitive terrestrial and marine ecosystems, among which are the unique coral reef of Eilat and the Dead Sea.”