In California, the world’s largest battery storage system gets even larger 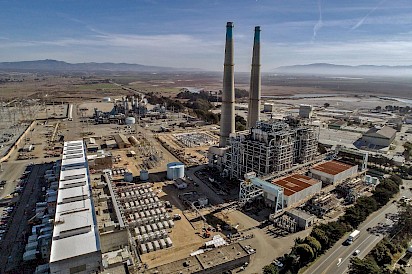 The largest battery storage facility in the world, located along Monterey Bay in California, has completed an expansion, demonstrating how storage systems can exist on a gigantic scale and can easily expand.

Moss Landing Energy Storage Facility, owned by Vistra Corp. of Texas, has now added 100 megawatts to the 300 megawatts of capacity that went online in December, for a total of 400 megawatts. The lithium-ion batteries can run for up to four hours on a charge, which translates to 1,600 megawatt-hours. The initial project and the expansion are operating under a long-term agreement with the utility Pacific Gas & Electric.

At the storage facility, rows of structures that resemble shipping containers fill an area that, even before the expansion, was about the size of three football fields. A large concrete box houses seemingly endless racks of batteries. The storage system is replacing a natural gas power plant and helping to provide flexible and carbon-free power to a part of the California grid that sometimes struggles with reliability.

California was already leading the nation with 1,438 megawatts of utility-scale battery storage capacity as of June, as much as the next 10 states combined, according to federal energy data.

To help understand the significance of this plant, and the growth of battery storage, I reached out to Joshua Rhodes, an energy researcher at the University of Texas at Austin.

“Essentially that battery is able to operate like a natural gas power plant for four hours,” he said. “In a place like California that’s really important because of how much solar California has, and the sun goes down every day. The plant is able to provide a lot of support to the grid to help it transition from it’s daytime solar into its night time usage of other power plants.”

In contrast, smaller batteries have operated at the margins of the grid, helping to stabilize the flow of electricity rather than acting as major generators in their own right. 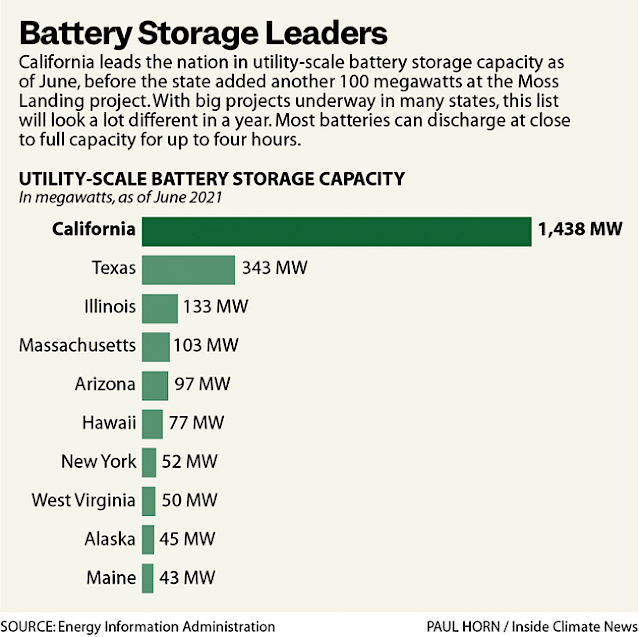 But when there are several gigawatts of battery projects in a regional grid, they could change prices in a way that squeezes their own profits.

The potential changes in pricing should be familiar to people in California. The state has seen its electricity market upended by the vast supply of solar power during daytime hours. The growth of battery storage is a new wrinkle that regulators and grid operators will need to track carefully.

Curt Morgan, Vistra’s CEO, said at the Aug. 19 announcement of the completed expansion that there is room on the Moss Landing site to build up to 1,500 megawatts of battery storage. He also has highlighted how batteries work well with intermittent energy sources like wind and solar by storing electricity during times when the supply exceeds demand, and then discharging it at times when demand is high but the sun may not be shining and the wind may not be blowing.

At this moment, 400 megawatts for a single battery storage project is huge. But in just a few years, it is likely to be unremarkable.

Looking at corporate announcements, there are at least a half-dozen other U.S. battery storage projects in development that are in the same super-size range.

One of them is scheduled to go online this year in Florida, the 409-megawatt Manatee Energy Storage Center, being developed by the utility Florida Power & Light, which would run for about two hours on a charge. 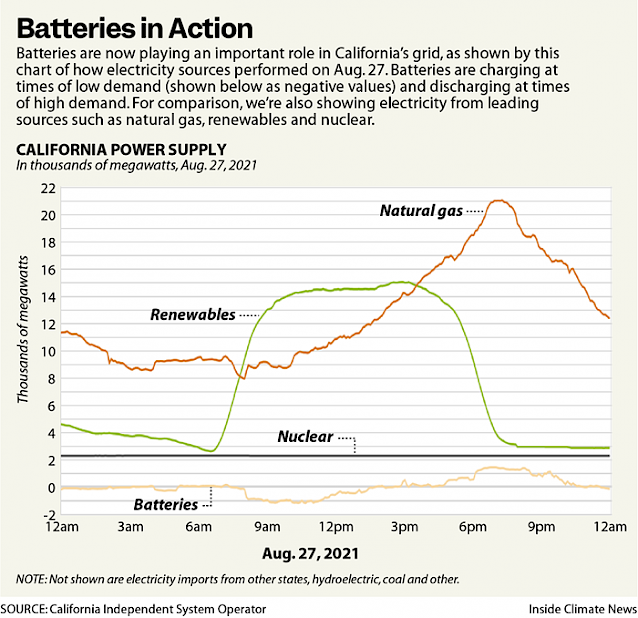 But citing a few big projects doesn’t show the full scope of what’s happening, with battery developments being proposed just about everywhere. Last month, the Energy Information Administration issued a report saying the battery storage market is going through “a significant structural change” that is leading to the installation of projects that will add 10,000 megawatts to the grid between 2021 and 2023—10 times the capacity that was online in 2019.

The growth is because of a confluence of factors: Battery costs have tumbled; government policies are encouraging development; and batteries are well-suited to work alongside solar and wind energy.

There also are some problems that regulators and manufacturers need to mitigate, like the potential for shortages of materials like lithium, the environmental harm of mining for those materials and the risk of fires in operational battery plants like the one at an Arizona Public Service facility in 2019.

When I asked Rhodes how he makes sense of the rapid growth of battery storage, he pointed to the growth and economies of scale that have transformed the wind energy industry.

“Every once in a while, I still see some of the original wind farms that went up and they’re like 100-foot tall steel lattice things that put out 100 kilowatts, and then you look across the road and you see like a 2.7-megawatt GE monster out there,” he said, referring to the largest wind turbines being built by GE Renewable Energy. “I don’t see why we won’t do this in storage too with these big projects where we start to get economies of scale. We figure out how to build them better and how to build them faster.”