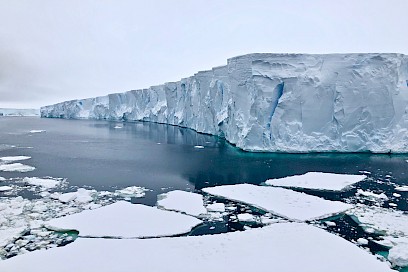 The recent breakup of an Antarctic ice shelf is speeding up the ocean-bound descent of a glacier holding back at least a meter of sea level rise, according to new research.

The findings may have implications for predicting when collapsing glaciers will raise sea levels and flood coastal cities.

Pine Island, the focus of the study, is already the fastest-melting glacier in Antarctica. It is located at the base of a peninsula jutting out of West Antarctica and helps support an entire ice sheet in that region.

“(Pine Island Glacier) has been on the radar of glaciologists for a long time because it drains a significant portion of the West Antarctic ice sheet, and it has been speeding up,” said Michele Koppes, a University of British Columbia glaciologist who was not involved in the study.

The speed of ice leaving Pine Island Glacier was relatively stable until 2017, when over the following three years, massive icebergs began breaking off the outer ice shelf that extends from the glacier past land and onto the ocean.

Experts noticed that the glacial ice loss was accelerating. The speed at which the edge of the glacier was retreating and its ice was floating away was increasing.

As the glacier continues to lose more ice, scientists ponder what will happen next.

“The real question is, how fast is that going to happen, and how much time do we have to adapt?” said Pierre Dutrieux, an oceanographer at the British Antarctic Survey and a co-author of the study. When ice from the ice sheet enters the ocean, it raises sea levels, which will eventually make coastal cities unlivable.

The worrying activity prompted researchers at the University of Washington and British Antarctic Survey to study the reasons behind the glacier’s accelerated movement. They shared their results June 11 in Science Advances.

“We naively thought that the ocean was going to be the main driver of the retreat and the acceleration,” Dutrieux said. “And maybe at some point the atmosphere, if it continues to warm up, was going to play a role.”

The authors first used satellite images to observe changes in how fast the ice was moving. When they ran a computer model to simulate ice flow, the results suggested that the loss of the ice shelves could better explain the glacier’s speedup than warming ocean temperatures.

“Ice shelves tend to hold back the flow of ice into the ocean. So if you remove an ice shelf, the glaciers will move faster,” said Ian Joughin, a glaciologist at the University of Washington’s Polar Science Center and lead author of the study. “I wasn’t expecting the part that we lost to have such a big impact on the glacier,” Joughin added.

Identifying this additional factor that contributes to glacier speedup could help improve models for studying their movements.

“That is fundamental physics knowledge for us to be able to predict what’s going to happen in the future,” said Andrea Dutton, who studies sea level rise at the University of Wisconsin-Madison and was not involved in the study.

Initially, researchers expected oceans warmed by climate change to gradually melt the glacier over centuries. But if the rapid collapse continues, the glacier could disappear faster than coastal communities could prepare for rising sea levels.

“Based on these results, I want to look more into taking the model and seeing what happens if we remove larger parts of that ice shelf,” Joughin said.

For now, the study concludes that Pine Island Glacier’s ice shelf could be entering another long phase of stability. Or the edge could begin retreating even more abruptly than before. Either scenario will still warrant close observation.

Human-caused warming of the ocean will also continue to thin the underside of the glacier, potentially destabilizing it more.

“We have enough knowledge to understand that we need to do everything in our power to reduce emissions and carbon dioxide in the atmosphere to prevent this from becoming an unstoppable sea-level rise scenario,” Dutton said.