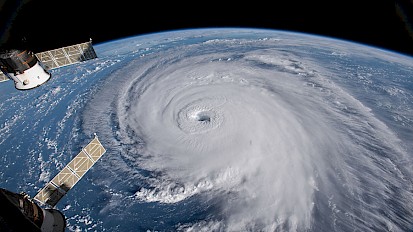 Following a historically active hurricane season in 2020, this year’s Atlantic season, which started on June 1, is forecast to be busy. After fluctuating between tropical storm and hurricane status over the past week, Tropical Storm Elsa hovered just below a Category 1 storm as it closed in on Florida’s west coast.

But looking only at a storm’s ranking can be misleading, experts say. As Hurricane Florence neared the North Carolina coast in 2018, its severity was repeatedly downgraded—from a Category 4 to a Category 1. Its winds diminished, but the storm grew larger in size, slowed down, and unleashed torrential rain that led to major flooding.

While the worst storms are typically thought of as those that reach major hurricane status—categories 3, 4, and 5—lesser-ranked storms can still cause catastrophic damage.

The well-known hurricane ranking, the Saffir-Simpson Hurricane Wind Scale, is based only on peak wind speeds measured at a given time.

“That’s only capturing one dimension of how a hurricane can impact us,” says Allison Wing, an atmospheric scientist at Florida State University.

Even tropical storms can be deadly. When Tropical Storm Allison came aground in Texas in 2001, it caused extreme flooding and killed 23 people. Tropical Storm Claudette, which hit the Gulf Coast last month, caused flash floods and killed 14 people.

“I think one of the biggest communication challenges for us all is hurricane rainfall,” says James Done, an atmospheric scientist at the University of Colorado, Boulder. “Most fatalities occur because of water, both flooding and storm surge.”

That’s why he and others have devised alternative ways for ranking a storm’s risk, arguing that conveying the danger to the public more comprehensively could help save lives.

What hurricane categories tell us

The Saffir-Simpson scale is designed to convey to those living in a storm’s path what sort of infrastructure damage they might expect—“everything from roof damage and shingles in a Category 1, to total destruction of framed houses in Category 5,” says Michael Brennan, branch chief of the Hurricane Specialist Unit at the National Hurricane Center. “It’s a great way to provide shorthand wind risk.”

When a storm is strengthening, Brennan says, it can be useful to mention that in forecasts, “because it does get people’s attention. We rarely mention it for systems that are weakening.”

He notes that wind speed is also an easy metric to use in warnings because it has the same impact in Miami as it does in New Orleans.

As measured in fatalities, however, the  water moved by a hurricane typically presents the biggest threat. While hurricane winds can contribute to flooding by pushing ocean water inland, the size of that storm surge and the damage it does don’t always correlate directly with wind speeds. The shape of the ocean floor and coastline, as well as the diameter of the storm, are also major factors.

Then there’s the amount of rain a storm dumps.

“Rainfall is almost entirely disconnected [from peak wind speeds] and generally governed by how fast the storm moves,” says Brennan.

Last year, Category 2 Hurricane Sally crawled over the Alabama coastline, unleashing upwards of 30 inches of rain. In 2017, Hurricane Harvey struck Houston as a Category 4 storm, and while its winds caused damage, it quickly became known as one of the rainiest storms in U.S. history, due to how slowly it moved over the city.

Still, says Brennan, the Saffir-Simpson scale has its benefits in its simplicity.

“The other hazards, they don’t really lend themselves to a simple categorization. Storm surges can vary dramatically. The impact of rainfall can vary based on how wet the soil is—ground already saturated is more likely to flood. It would be difficult to convey in a simple rating system,” he says.

While the National Hurricane Center’s forecast metrics are the ones most widely seen in the news and on official alerts, other methods of ranking a hurricane’s potential impact do exist.

Since Hurricane Donna struck the East Coast in 1960, AccuWeather CEO Joel Myers says he’s been thinking of a better way to describe the hazard posed by a hazard. In 2019, AccuWeather began using what they dubbed the RealImpact Scale. On a six-point scale, it evaluates a number of factors such as wind speeds, flooding potential, and population in the region where the storm is expected to hit.

“Hurricane Florence hitting South Carolina was a classic example of that in 2018,” Myers says of the difference in how they rate storms. “The rating on the Saffir-Simpson was a one. For us it was a four.”

Myers says that’s because at AccuWeather, they were looking at additional factors like the size of the storm and estimated rainfall.

With support from offshore energy companies and insurers, the University of Colorado’s Done created the Cyclone Damage Potential Index, which ranks storms from one to 10. For his index, they added two variables: the overall size of the hurricane and how fast it was traveling. “Those two combined give us a duration of damaging winds.”

In other words, the index predicts not just how quickly winds might be moving, but how long they could be moving at those speeds. He says knowing this impact can be particularly useful for weaker hurricanes that might not pack an instant punch, but given enough time, could do just as much damage as a hurricane with stronger winds.

Done’s index can provide some insight into potential flooding because slower moving storms, like Hurricane Harvey, have more time to dump rain.

The National Weather Service is also studying how to better communicate to the public all the risks associated with hurricanes, Brennan says. In addition to a storm’s wind-speed category, the National Hurricane Center also shares real-time updates on potential storm surge and rainfall—both of which are being increased by climate change.

“There are a couple things we know for sure,” Brennan says. “Sea level is rising, and we can observe that. That increases vulnerability to storm surge.”

For now, Brennan says, “You want to know what your risk is before a storm ever threatens you.” For those living along the coast, he recommends learning more about what level of damage a residence can sustain. Some homes built in Florida after Hurricane Andrew, for example, can serve as shelters if they’re up to code.

“You have to do that analysis and find out if your house is safe, and if not, get somewhere safe,” he says.

Editor’s note: This story has been updated to reflect Hurricane Elsa’s hurricane status.