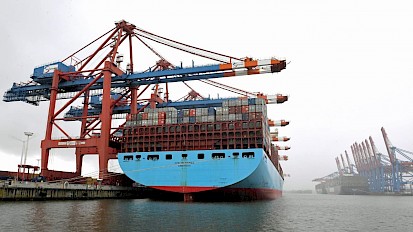 The order is the biggest yet in an industry that is a significant contributor to climate change accounting for about 3% of global greenhouse gas emissions. So far, shipping executives have few promising paths to decarbonization. Their success will depend on future orders from top customers like Amazon, Disney, and Microsoft if they decide to cut emissions from their supply chains.

The ships will be built by Hyundai Heavy Industries and are due to be delivered by 2024, each at a price tag of $175 million, 10%-15% above the average price for the ships used by the company. Their engines will run on e-methanol sourced from the Danish startup REintegrate, a purportedly carbon-neutral fuel that is made by producing hydrogen through electrolysis, using electricity from a solar farm, then combining that with CO2 recycled from biogas plants. The resulting fuel is carbon-neutral (traditional biofuels for ships, by comparison, emit about 70% less carbon than traditional heavy fuel oil). Maersk expects that running eight ships on these fuels will reduce the company’s annual carbon footprint by about 3%.

Maersk’s head of decarbonization Morten Bo Christiansen told Reuters that the order comes because of customer pressure. More than half of the company’s 200 biggest customers have set climate targets that require them to look for low-carbon shipping options in the coming years.

Emissions from shipping have been steadily rising despite modest efficiency improvements thanks to rising trade on the high seas, according to the International Maritime Organization (IMO). The IMO has pushed in recent years to water down climate regulations, in part because shipping companies today have few readily scalable options to replace the carbon-heavy fuel that drives most ships.

Maersk has committed to reach net-zero emissions by 2050, a goal that requires new carbon-free ships to come online soon, given that each has a lifespan of several decades. The company’s order is a major boost for the nascent e-methanol industry. Global production of methanol, which can be used in plastics, aromatics, and other industrial applications in addition to fuels, is rising quickly. But it still provides only about 0.03% of total shipping fuel. Of that, nearly all of it is made from biofuels that are less carbon-intensive than regular fuel but aren’t carbon-neutral.

Maersk may struggle to source enough carbon-free fuel. Global production capacity for e-methanol remains limited to just a few plants in the Netherlands, Canada, and Iceland, a tiny fraction of what would be needed to supply the entire shipping fleet. To hedge against supply shortages, Maersk’s new ships will have the ability to run on traditional heavy fuel as well. Previous initiatives by the company to source fuel made from recycled cooking oil quickly ran into supply constraints.

As with many emerging industries in the climate economy, supply will only catch up if there’s demand. Now the question is whether retail and commodity giants will be willing to pay Maersk a premium for carbon-free shipping.