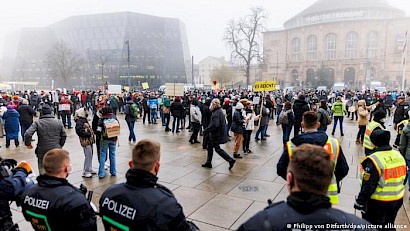 State and federal lawmakers in Germany are exploring a sweeping set of measures to save energy, from turning off street lights to lowering building temperatures; and they are pleading with the public to cut consumption at home.

Whether those efforts spur a call to solidarity or a call to arms won’t become clear until the cold sets in and bills come due. Yet Chancellor Olaf Scholz is not in a wait-and-see mood, telling public broadcaster, ARD, last month that spiraling heating costs are a “powder keg for society.”

In explicitly naming the elephant in the room, the chancellor and his government are on the hook for nipping social unrest in the bud.

“In using this ‘powder keg’ narrative, the chancellor is trying to make way for key decisions,” Ricardo Kaufer, a professor of political sociology at the University of Greifswald, told DW. “So all actors who could potentially stand in the way of measures are cajoled into compromise.”

In other words, Scholz is signaling to his governing partners, political opposition, business leaders, and civil society that they bicker over policy responses at the country’s peril.

This is a “lesson learned” from the pandemic, Kaufer said, when lawmakers often seemed unprepared to contain it, despite scientific predictions on how and when the virus would spread. Their communication was more often reactive than proactive.

The Bundestag, the German parliament, has already passed legislation that hopes to insulate society’s most vulnerable from price shocks. At the same time, German utilities will be allowed to pass some of their increased costs onto consumers.

In crafting policy, officials are walking a fine line. They want to help secure household finances, especially for low-wage earners, but not so much that they undermine the incentive to save energy.

More relief may follow the summer recess, however agreement on what that looks like, how much it will cost, and how it will get paid for is likely weeks away, at least.

The smallest of the parties in the governing coalition, the neoliberal Free Democrats (FDP), control the finance ministry, which gives them significant power of the purse. Its minister, Christian Lindner, has made clear he intends to use that power sparingly, as he stands up for his party’s values of low tax, low spending, and low regulation.

The FDP’s bigger partners, Scholz’s center-left Social Democrats and the environmentalist Greens, are pushing for a more generous helping hand.

Even if the government gets the measures right, they could still get the messaging wrong, which political scientists say can be just as important in steering public sentiment. As the pandemic showed, money and resources are only half the battle; clear and consistent communication is the other half.

“Perceptions are decisive,” Evelyn Bytzek, a professor of political communication at the University of Koblenz-Landau, told DW. “Ultimately, we all act based more on what we perceive to be true than what is true.”

Symbolism is a powerful tool in maintaining public support, Bytzek said. She pointed to Gerhard Schröder’s visit to flood-stricken parts of eastern Germany in 2002, which gave him a boost in his reelection campaign for chancellor. He went onto win a few weeks later.

Scholz won last year’s election in part due to his Merkel-like passive leadership style. Now that could become a liability — and stoke unrest — if the public feels their ship of state is without a captain at the helm with an iceberg ahead.

“Crisis is not just a danger, but also an opportunity to generate more trust when crisis management is well perceived,” Bytzek said.

Scholz’s deputy, the Greens’ Robert Habeck, seems to understand that. As economy minister, Habeck has the lead on energy policy and has been forced to make hard choices that often contradict his own environmentalist credentials. Polls show he has won points for regularly explaining the rationale behind those decisions.

Though there are limits to what communication can do. Habeck was booed at townhall events last week. However, those protests were more anti-war than anti-democratic.

The Federal Interior Ministry told DW that protests of similar magnitude to those against pandemic restrictions are foreseeable, depending on how much the cost and supply of energy burden society.

“We can assume that populists and extremists will again try to influence protests to their liking,” Britta Beylage-Haarmann, a ministry spokesperson, told DW in a statement. “Extremist actors and groups in Germany can lead to a growth in dangers if corresponding social crisis conditions allow for it.”

The Federal Police, which fall under the ministry, told DW they have “no insights” into specific threats arising from the crisis.

Perception also plays a role in how much unrest can shake a country. Querdenker and others who have taken to the streets to challenge state authority during the pandemic are loud, but they have never represented more than a small minority of public opinion. Still, they have received an outsized share of media and political attention.

Political sociologists like Greifswald University’s Kaufer say protest movements stand out more in a country like Germany, where consensus-based political culture and federal power-sharing dissuade the instrumentalization of social discontent than elsewhere in Europe. France, for example, has a reputation for confrontation.

Instability in Germany often has a negative connotation, he said, linked to events like bloody street battles amid hyperinflation in Weimar-era Germany, which gave rise to the Nazis.

“There has been a failure of discourse among progressive forces to recognize positive examples in German history,” Kaufer added. “There is a fear of protest, that people will take action without the legitimacy of processes like voting.”

He cited East German street protests in 1953 and the peaceful revolution of 1989, and the West German anti-nuclear movement in the 1970s and 80s, as examples that deserve a stronger anchor in Germany’s collective memory.

Longer-term risks to social cohesion, however, don’t end with the coming of spring.

Germany was once one of Europe’s most egalitarian countries, in which class and social status had less influence in determining one’s success in life. That is changing, as Germany follows a general trend towards growing income inequality.

Inflation and energy prices will disproportionately impact the country’s most vulnerable, according to economic models, as low earners have less disposable income to absorb increased costs. That also makes them more susceptible to anti-government rhetoric than other income groups.

“Pandemic, war, and inflation endanger the lower middle class. If we can’t manage to stabilize them, then their fears of being permanently pushed down grow,” Pickel said, “then we may see more people take to the streets in Germany. And even more virulent, agreement with the far-right populist AfD and the appearance of solutions from far-right populists can change voting behavior.”