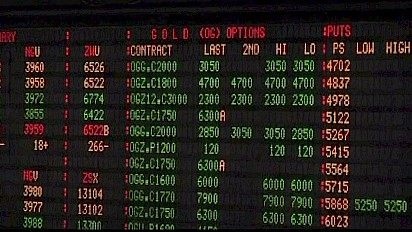 It is no secret that the stock market has been rocky since the start of the year. Tech giants like Apple, Microsoft, Google and Amazon have been no help at all. Their shares have all had double-digit percentage declines.

So far in 2022, the S&P 500 is down more than 13 percent, and it briefly dipped more than 20 percent below its peak, putting stocks in bear market territory. Dismal as the stock market may be, the situation looks even worse if you are worried about the future of the planet. The fact is that only one broad stock sector has provided consistent returns over the last year: old-fashioned fossil fuel, and the companies that extract, refine, sell and service it.

In fact, when I looked at a performance table of the top companies in the S&P 500 for 2022, I found that 19 of the top 20 spots belonged to companies connected, in one way or another, with fossil fuel. The best performer was Occidental Petroleum, with a gain of 142 percent.

This isn’t just a U.S. phenomenon. Saudi Aramco, the national oil company of Saudi Arabia, is vying with Apple for the distinction of being the world’s most valuable publicly traded company. For much of the last year, the rising price of oil has outpaced the value of businesses based on silicon chips.

If you are paying attention to science, this is awkward in the extreme. To cite just one recent, important report, a body of experts convened by the United Nations and known as the Intergovernmental Panel on Climate Change, found in February that the world’s cities, farms and coastlines are insufficiently protected from the dangers that climate change has already wrought, including increasingly severe droughts and rising seas. Incessant burning of fossil fuels, the report found, will make matters much worse.

Yet for short-term investors, energy is looking better than ever.

Russia’s assault on Ukraine and the mounting Western sanctions are improving prospects for fossil fuel, Bank of America noted in a report to clients on Thursday. “Our commodity strategists expect that a sharp contraction in Russian oil exports could trigger a full-blown 1980s-style oil crisis,” with energy prices rising much higher, the report said. “Not owning energy is becoming more costly,” it said. “With China reopening, peak driving season and favorable positioning/valuations, we see more upside” for energy prices.

This poses a classic dilemma for investors who want to follow the guidance of much academic research and be fully diversified. I try to do this by putting my money into low-cost index funds that track the entire stock and bond markets. These funds are marvelous in many ways. They reduce the risks of specific stock selection — owning the wrong stock at the wrong time — and of emphasizing the wrong sectors at inopportune moments.

There is an important catch, though. Complete diversification means owning all sectors and companies, and, in the current environment, that definitely includes traditional fossil fuel companies.

What should you do if you accept the findings of science and, furthermore, want to follow the dictates of your conscience? Suppose your main concern is having clean hands, which means, to you, not profiting personally from fossil fuels. One thing you can do is exclude fossil-fuel shares from your portfolio. It is increasingly easy to accomplish, even in 401(k)s and other retirement plans, assuming your workplace plan has a “sustainable” or “socially responsible” investing option.

But in excluding fossil fuels from your investments, you will be missing the market’s best-performing part.

One simple way of seeing this cost is by comparing two S&P 500 index funds — the SPDR S&P 500 ETF Trust, a plain vanilla fund that tracks the S&P 500, and the SPDR S&P 500 Fossil Fuel Reserves Free ETF. The second fund excludes the high-performing but climate-warming fossil-fuel companies.

The difference shows up in their returns this year. The plain vanilla S&P fund fell 13.5 percent, while the fossil-fuel-free fund fell 15.1 percent. Ouch!

These performance discrepancies aren’t the end of the world, you might say, while untrammeled use of fossil fuels may well be. You might add that when energy prices have been lower, portfolios free of fossil fuels have sometimes outperformed the more inclusive index. That disparity may widen at some point in the future — one in which fossil fuels are no longer a central part of the global energy mix. Still, there is undeniably a cost if you avoid fossil fuels.

Yet aside from the benefits of diversification, there is an argument for owning the entire market even if you are troubled by investments in fossil-fuel companies. It is that through stock ownership, you can try to use your voice to ensure that the companies in which you invest behave in ways you can accept.

That is easier said than done. As I’ve pointed out, the vast majority of shareholders — those with a stake through mutual funds, exchange-traded funds or their pension plan — can’t vote directly in the policy and boardroom fights that take place every year in corporate America. Fund managers vote on their behalf, and, until recently, those managers didn’t bother to ask what shareholders preferred.

That has begun to change in an experiment involving Engine No. 1, the activist hedge fund that took on Exxon Mobil and won a wildly successful battle.

Last June, a coalition of investors led by Engine No. 1 managed to replace three directors on the board of Exxon in an effort to push the company to transition intelligently to a future based on sustainable energy.

In an interview on Tuesday, Jennifer Grancio, the chief executive of Engine No. 1, said it had won the Exxon fight in no small part because the battle had been couched as being about money, not ethics or social preferences.

“Fossil fuels are still needed — we know that,” she said. “But we also know that a good company will allocate capital appropriately, moving toward a transition to sustainable energy. Exxon Mobil didn’t have the right people on the board of directors to do that.”

Ultimately, a company that does not factor in the costs of dealing appropriately with climate change will not prosper, Ms. Grancio said. Those arguments persuaded BlackRock, Vanguard and State Street, the big index fund companies that are the largest shareholders in Exxon Mobil and most other publicly traded companies, to side with Engine No. 1.

Now, with the help of Betterment, an asset management platform, and Tumelo, a British financial technology company, Engine No. 1 has been asking investors in its S&P 500 index fund, with the provocative ticker VOTE, how they would like their votes to be cast.

One question selected by Tumelo and Betterment asked whether fund shareholders supported a resolution calling on Exxon to complete an audited report on the financial implications of achieving net-zero carbon emissions by 2050.

“We received those poll results from Betterment and took them under consideration,” Ms. Grancio said. “And we voted in favor of that proxy,” as did BlackRock and other investors. It passed, though several other resolutions aimed at curbing carbon emissions at energy companies have not been successful.

This is still light-years away from the direct voting by mutual fund investors that I think is needed. Still, of such fledgling steps is progress made: asking shareholders what they want, and respecting their preferences.

“I think the future is that people will have a real voice in these issues,” Georgia Stewart, chief executive of Tumelo, said. “This is just a start.”

The Securities and Exchange Commission has introduced regulations that would require companies to disclose climate-related risks as a matter of course. Many proxy campaigns undoubtedly provided the impetus for the new rules, which some business groups are resisting. The Labor Department is also considering regulations that would protect retirement plan investors from climate-change risk, while some lawmakers in Washington and state governments controlled by Republicans have begun to fight climate-change disclosure.

These issues aren’t going away.

I think they are critical for millions of people for whom diversification by owning the total market through index funds makes financial sense. But it is difficult to recommend holding shares in fossil-fuel companies if the costs of climate change are not fully reflected in the price of energy.

Coming to grips with companies’ contributions to climate change will probably require an active role by investors with the will and the ability to monitor companies and exert voting power in internal corporate fights. But it will also take plenty of citizens who wield influence on these issues in the wider political arena.

Shareholder campaigns to mold the behavior of corporations can go only so far. There are no proxy campaigns at all directed at Saudi Aramco or other state-controlled entities that extract energy abroad. Nor are proxy votes possible at the private companies that have increasingly moved into the energy business in the United States and Canada.

“Climate change is a massive planetary problem that is going to take sustained efforts for decades,” said Boris Khentov, head of sustainable investing at Betterment. “These issues are complicated, and the solutions are going to be complicated. To put the entire onus for changing the world on your investing portfolio is a fundamentally problematic premise.”

There is no cure-all here, and no easy answer for investors. But at least there are some signs of progress, at a moment when there are all too few of them.