Siemens Energy and Canadian pipeline company TC Energy in February agreed to commission a novel waste-heat-to-power facility in Alberta by 2022 that captures waste heat from a gas-fired turbine operating a pipeline compression station, and then converts it into power using an innovative supercritical carbon dioxide (sCO2) power cycle.

The facility’s innovative technology is based on an advanced Rankine Cycle that Ohio-based technology company Echogen Power Systems (EPS) has developed since its founding in 2007 under numerous partnerships, including with the Department of Energy and Dresser-Rand (now a Siemens business). The company has quickly progressed the technology it says could compete with steam cycles from small multi-kilowatt demonstration units developed in 2011 to its most recent multi-megawatt heat recovery package, which it began to commercially offer in 2019.

As Timothy Held, EPS chief technology officer, told POWER in March, the agreement between Siemens and TC Energy marks a “culmination of a long series of technical due diligence activities, economic cost-benefit modeling, and contractual negotiation.” If commissioned as envisioned by 2022, the pilot installation will make history, he noted: “We are pleased to say that the TC Energy system will be the first commercial deployment of any type of supercritical carbon dioxide (sCO2) power cycle in the world.” 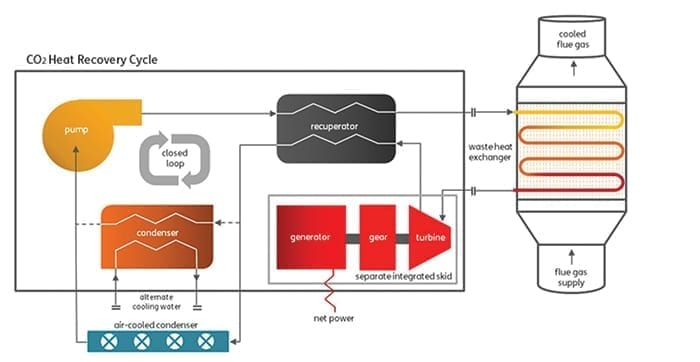 EPS’s waste-heat-to-power system is essentially a heat engine—the 7.5-MW EPS100—that uses a multi-stage recuperated closed-loop cycle, where heat from an industrial plant’s or gas turbine’s exhaust stream is recovered though an sCO2 heat exchanger. “The turbomachinery pumps the liquid CO2 to high pressure and passes through a combination of recuperators and waste heat exchangers (without using a secondary oil loop) before entering the turbo-expander, which drives the shaft that in turn drives a generator,” the company explained. “Effluent CO2 exits the turbine, and passes through a series of recuperators to exchange more heat, and finally enters the condenser where it is converted back to liquid CO2.”

One benefit of using sCO2 as a working fluid is that it “just so happens that CO2 has some very unique thermodynamic properties,” that, under certain conditions—above its critical point of 87.76F at 1,070 psi (30.98C at 73.78 bar)—“make it a superior working fluid to steam,” explained Scott MacAdam, a chemical engineer at gas research entity GTI, during a February webinar hosted by Gasworld.TV. Power generation thrives on the efficient conversion of heat into power, he noted, and various studies have shown that CO2 cycles that operate at 700C or higher can enable cycle efficiencies of more than 50%.

That’s significantly higher than what can be attained with steam—we’re talking about up to a five percentage point improvement in cycle efficiency, which has significant ramifications both on emissions, water usage, and a variety of other parameters,” MacAdam said. The no-water requirement is of particular interest in modern power systems owing to climate-related changes, especially for facilities in arid zones or regions subject to freezes or sub-freezing temperatures.

Another benefit is “The high density and volumetric heat capacity of CO2 with respect to other working fluids makes it more energy dense, meaning that the size of all system components can be considerably reduced without losing performance—including the turbine, pump, and heat exchangers,” EPS said.

But CO2 also “more effectively captures waste heat from sources that have an approximately constant heat capacity” such as turbine exhaust or other gases, owing to the character of its heat capacity in the “supercritical region,” which “provides superior matching to the heat source temperature profile compared to the boiling process utilized with other working fluids such as steam or organic working fluids used in Organic Rankine Cycle (ORC) systems,” EPS said.

“In short, sCO2 provides better performance and cost than both Rankine cycles over the full range of applications [EPS has] studied, with heat source temperatures ranging from 300C to 1,500C,” said EPS’s Held. “Compared to ORC systems, the working fluid in sCO2 power cycles is low-cost, non-flammable, and thermally stable, allowing for direct heat exchange between a hot stack gas and the working fluid. ORCs require an intermediate heat transfer fluid to transport heat from the stack to the working fluid, which adds cost and reduces performance, and adds a fire risk in the event of a heat exchanger leak.”

A System Suited for Remote Operation

These advantages are well-suited to midstream oil and gas operations, noted Siemens, which will build, own, and operate the facility under the agreement with TC Energy (though TC Energy will hold option to own it at a later date). Benefits include a 25% to 40% smaller footprint than steam-based systems, a 10% increase in compressor station efficiency, and the capability to produce clean, emissions-free electricity, Siemens said. “Moreover, because the working fluid is contained within a closed-loop system, no boiler operator is required, making the system suitable for remote operation.”

Arja Talakar, senior vice president of Industrial Applications Products for Siemens Energy, suggested the pilot project will open up new opportunities to scale the technology. Meanwhile, TC Energy said it is “currently evaluating other compressor station sites to deploy the technology, with the potential to generate 300 MW of emissions-free power.”

GTI’s MacAdam said the prospects for sCO2 for the near-term application of waste heat recovery is promising. “Many systems around the world—thousands of systems—release either exhaust gas or flue gases at temperatures up to 500C. These are prime candidates for converting heat into power at smaller scale, and examples include small gas turbines, either at compressor pipeline stations, offshore oil and gas platforms, possibly peaking power plants, as well as industrial sources such as steel mills class furnaces and cement plants,” he said. MacAdam said initial commercial projects—including the 10-MW design being launched in Alberta—will “pave the way to larger projects in the future.”

The pilot installation in Canada is backed by $8 million in funding from Emissions Reduction Alberta’s (ERA’s) Industrial Efficiency Challenge, a program that invests carbon price revenues earned from large final emitters to boost clean technology development. Held noted that stateside, the DOE is supporting several other applications for sCO2 cycles, and Echogen is involved in several of those initiatives.

“Echogen has led and partnered with other groups on multiple U.S. DOE-funded projects, furthering developments of sCO2 power cycles in applications as varied as concentrating solar power (CSP), coal-fired power plants, and micronuclear reactor systems,” he said. “These projects have enabled us to optimize our design methodologies, including highly developed steady-state design modeling tools, and high-fidelity transient simulations that allow us to refine our system control strategies.”