Europe is about to ban Russian oil: What happens next? 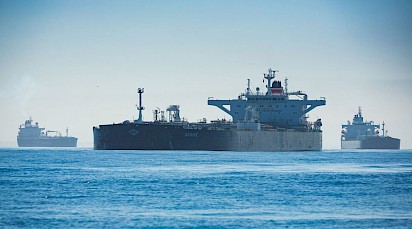 Russia’s decades-long dominance of Europe’s energy market is crumbling, and the biggest blow is expected this week as the European Union moves toward a ban on Russian oil.

On Wednesday, the European Commission president, Ursula von der Leyen, proposed a complete import ban on Russian oil with crude phased out over six months and refined products stopped by the end of the year, subject to approval by the member states.

With this phased approach, “we maximize pressure on Russia, while at the same time minimizing collateral damage to us and our partners around the globe,” she said.

Oil prices rose after the announcement. Brent crude was up more than 3.7 percent for the day.

Analysts say it will be possible to sever Europe’s oil ties to Russia, but the effort will take time and may lead to shortages and higher prices for gasoline, diesel, jet fuel and other products — a situation that could penalize consumers already struggling with inflation and, ultimately, derail the economic recovery from the pandemic.

It’s “going to be complicated,” said Richard Bronze, head of geopolitics at Energy Aspects, a research firm. “You have got a de-linking of two very intertwined parts of the global energy system,” he said, adding, “There are going to be disruptions and costs associated with that.”

“But policymakers are increasingly convinced it is necessary and better to do that relatively rapidly, both to try and reduce revenues for funding Russia and to reduce European exposure to Russian influence,” Mr. Bronze said.

The European Union’s aims are clear. With Russia continuing to wage war in Ukraine, Europe wants to deny President Vladimir V. Putin funds from sales of oil, usually his largest export earner and a cornerstone of the Russian economy. Russia’s oil sales to Europe are worth $310 million a day, estimates Florian Thaler, chief executive of OilX, an energy research firm.

The move against oil would be part of an effort to end Moscow’s ability to twist European arms over energy. In its latest attempt to do so last week, Russia cut off natural gas supplies to Poland and Bulgaria. Russian oil may be an easier target than gas, analysts say. “The oil system can reconfigure itself,” said Oswald Clint, an analyst at Bernstein, a research firm, adding that oil was “a very deep, liquid and fungible market” served by thousands of tankers.

Still, for the European Union, cutting itself off from Russian oil will be a herculean task that may risk sowing division. About 25 percent of Europe’s crude oil comes from Russia, but there are wide differences in the level of reliance among countries, with the general rule being that nations geographically closer to Russia are more entangled in its energy web.

Britain, which is not a member of the European Union and has oil production from the North Sea, has said it will phase out Russian energy; Spain, Portugal and France import relatively low amounts of oil from Russia.

On the other hand, several nations, including Hungary, Slovakia, Finland and Bulgaria, usually import more than 75 percent of their oil from Russia and might struggle to replace it with alternative sources soon.

“It is physically impossible to operate Hungary and the Hungarian economy without crude oil from Russia,” Hungary’s foreign minister, Peter Szijjarto, said on Tuesday.

While worries focus on gas pipelines, huge volumes of oil also flow from Russian oil fields through the Druzhba pipeline (named after the Russian word for friendship), whose northern branch feeds Germany and Poland and southern line goes to Slovakia, the Czech Republic and Hungary.

Refineries along this route, including the PCK facility in Schwedt, near Berlin, “have been running on Russian crude for the last 50 years,” Mr. Thaler of OilX said. “You need to source a proxy for that on the international market.”

Mr. Thaler said Hungary and Slovakia could potentially receive more oil from tankers in the Adriatic Sea, via a pipeline that runs through Croatia, while the Czech Republic could be fed from a terminal in Trieste, Italy. Policymakers in Brussels may give Hungary and perhaps other countries long lead times to win their support.

Germany, on the other hand, and Poland now seem determined to end their dependence on Russian energy, and this change of heart in Germany seems to be key to European policy. Germany plans to bring oil through the eastern port of Rostock as well as from across the border in Poland, from the port of Gdansk.

The German government says it has been able to end contracts for Russian crude, with the exception of the Schwedt refinery and another in eastern Germany called Leuna, which together account for roughly 12 percent of the country’s imports from Russia.

“That means the embargo is already being implemented, step by step,” Robert Habeck, Germany’s economy minister, said on Monday.

While oil is spoken of as a single commodity, there are many types with different characteristics, and refineries are often configured to run certain grades of crude. Switching away from Russian oil may involve costs if the fuel can even be found, analysts say.

Zsolt Hernadi, the head of MOL, a large Hungarian oil company, recently said it could require up to four years and $700 million to recalibrate his company’s refineries in the event of an embargo on Russian oil.

Analysts say an embargo could trigger a costly competition for alternative sources of oil.

Viktor Katona, an oil expert at Kpler, which tracks energy flows, said that of the substitutes potentially available for Russian oil, only Saudi output was a good fit. So far the Saudis, who will lead an OPEC Plus meeting on Thursday, have shown little inclination to increase their output more than incrementally. Mr. Katona said Iranian oil might also work, but sanctions imposed by the United States continue to crimp Iran’s fuel sales. Oil from Venezuela, which is also crimped by sanctions, is often mentioned as a possible swap for Russian crude.

Strains are already showing up in the market for diesel, which is used by both ordinary drivers and truckers. Diesel is in short supply because European distributors are wary of buying refined products from Russia, which once supplied large volumes of the fuel to Europe. Diesel is selling for the equivalent of about $170 a barrel, well above the $107-a-barrel futures price of Brent crude, the international standard, and Mr. Katona expects the price to keep going up. At the pump, diesel prices in Britain are up more than 35 percent over the last 12 months, according to the RAC, a motorists’ club.

Analysts say the releases of oil from reserves announced by Washington and the Paris-based International Energy Agency, which are scheduled to provide more than a million barrels of extra oil a day over six months, have so far had more impact on the American than the European market.

For Germany, Europe’s largest economy, the toughest decision will be what to do about the refinery in Schwedt, which is majority-owned by Rosneft, the Russian national oil company, and holds smaller stakes in two other refineries in Germany. Another Russian company, Lukoil, also holds stakes in refineries in Europe, including one of Italy’s main refineries, ISAB, in Sicily.

“Those companies would have little incentive to run non-Russian crudes,” Mr. Bronze said.

The German economic ministry said it did not expect “a voluntary termination of supply relations with Russia” in Schwedt and has been exploring legal options, including whether a state takeover could be justified.

And then there is the question of whether an embargo on Russian oil for Europe will achieve the aim of cutting off the Kremlin’s revenues. So far, the pressure on Russia seems to be raising prices and, therefore, revenues. Rystad Energy, a consulting firm, projects that even though Russian oil production is likely to decline in 2022, the Russian government’s total income from the fuel is likely to be up around 45 percent, to $180 billion.

Russia is also finding homes for its oil in India and, to a lesser extent, Turkey, as buyers take advantage of substantial discounts. “It might be just a game of musical chairs,” Mr. Katona said.