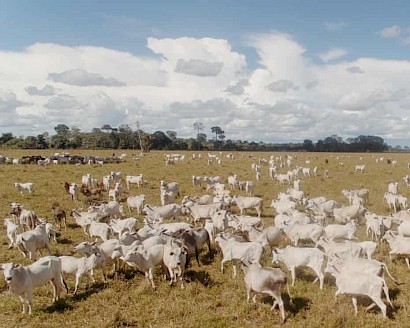 Cattle ranching, responsible for the great majority of deforestation in the Amazon, is pushing the forest to the edge of what scientists warn could be a vast and irreversible dieback that claims much of the biome. Despite agreement that change is necessary to avert disaster, despite attempts at reform, despite the resources of Brazil’s federal government and powerful beef companies, the destruction continues.

But the ongoing failure to protect the world’s largest rainforest from rapacious cattle ranching is no longer Brazil’s alone, a Washington Post investigation shows. It is now shared by the United States — and the American consumer.

In the two years since Washington lifted a moratorium that was imposed on raw Brazilian beef over food safety concerns, the United States has grown to become its second-biggest buyer. The country bought more than 320 million pounds of Brazilian beef last year — and is on pace to purchase nearly twice as much this year. The biggest supplier is the beef behemoth JBS, whose fleet of brands stock some of America’s major retail chains and businesses: Kroger, Goya Foods, Albertsons (the parent company of Safeway, Jewel-Osco and Vons).

JBS, the world’s largest beef producer, has repeatedly been accused by environmentalists of buying cattle raised on illegally deforested land. Greenpeace first alleged such ties in a 2009 report. In 2017, Brazil’s environmental law enforcement agency, Ibama, fined the company what was then more than $7.5 million, alleging that two of its Amazon meatpacking plants had purchased nearly 50,000 such animals. In October, federal prosecutors focusing on deforestation alleged widespread “irregularities” in the company’s direct supply chain from January 2018 to June 2019 in Pará state.

But in a forest where some beef producers still don’t track cattle origins, and in a country where no law specifically prohibits the purchase of cattle from illegally deforested land, JBS considers itself one of the good guys. It says it has prioritized the environment and blocked more than 14,000 cattle ranches that didn’t comply with company standards. It has signed agreements with environmentalists and federal prosecutors promising not to purchase cattle from ranches that were illegally deforested. It publishes the names of the ranches from which it purchases cattle.

None of it has been enough.

By reviewing thousands of shipment and purchase logs, and analyzing satellite imagery of Amazon cattle ranches, The Post found that JBS has yet to disentangle itself from ties to illegal deforestation. The destruction is hidden at the base of a long and multistep supply chain that directly connects illegally deforested ranches — and ranchers accused of environmental infractions — to factories authorized by the U.S. government to export beef to the United States.

Between January 2018 and October 2020, records show, JBS factories with that authorization made at least 1,673 cattle purchases from 114 ranchers who at the time owned at least one property cited for illegal deforestation. Several ranchers from whom JBS bought cattle were notorious — alleged by authorities to be among the Amazon’s most destructive actors. The supply chain, the examination found, was infected with dozens of ranches where land had been deforested illegally. Satellite imagery showed that several of the operations had cattle on land where grazing was prohibited at the time — in what environmental regulators called a violation of Brazilian law.

“Environmental control in the beef supply chain needs to be much more rigorous,” said Suely Araújo, who directed Ibama from 2016 to 2018. “Meatpackers need to stop complaining and actually control their supply networks. We’ve talked about cattle tracking for three decades but have never done it in a real way.”

President Biden has been outspoken about the need to conserve the Amazon, a vital carbon sink that scientists say must be preserved to avert catastrophic warming. But the U.S. agency that authorizes Brazil’s meatpacking plants to export to the United States says it doesn’t try to determine whether the operations cause environmental damage. Seven plants greenlighted by the U.S. Food Safety and Inspection Service are in the Amazon.

Brazil’s Environment Ministry did not respond to requests for comment. The Agriculture Ministry blamed “historic land-use problems,” not the beef industry, for deforestation.

Senior officials at JBS say Brazil’s cattle supply chain is one of the world’s most complex, involving thousands of ranches spread over expansive territories, and is extremely difficult to monitor. Marcio Nappo, director of corporate sustainability at the beef giant, told The Post that the company has gone beyond what other companies have done to root out deforestation.

“JBS has been in the top five, top 10 companies in eliminating deforestation in its supply chain,” Nappo said. “…We can say with great confidence that we have already advanced enormously.”

The company has moved aggressively to stop purchases from operations that graze cattle on illegally deforested land, he said, using a “pioneering” monitoring system. He said the company plans to root out all deforestation in its supply chain by 2025 and has already succeeded in stopping purchases from ranches that have carried out illegal deforestation.

But the biggest problem in Brazil’s cattle industry today, and a key reason deforestation in the Amazon has reached a 15-year high, isn’t the direct supplier. That hasn’t been the case in years. The biggest problem is the indirect suppliers — ranchers who know how to work the system, shuffling cattle from ranch to ranch to conceal their illegal origins and sell them off.

The game is called “cattle laundering.” The forest is full of players, swaggering ranchers who built their businesses from the embers of the forest. Today, one Amazon cowboy, Zaercio Fagundes Gouveia, says cattlemen like him have a new focus: