“It’s going to happen, one way or another.”

That was my remark earlier this morning after getting into a small row with a reader, in a dispute sparked by an offhanded comment he made over Iran’s growing nuclear ambitions.

Our conversation had started off lightly, with him standing atop his soapbox, preaching about the evils of nuclear energy.

And I could tell right away that he would never see past mushroom clouds and war.

You know the type of person that refuses to accept anything other than their own point of view? You could prove our case time and again, and they still stubbornly defend their opinion?

Unfortunately, this particular reader lives in a world of wishful thinking — a world completely powered by renewable energy, where politicians keep their word… where nobody lies and cars are fueled by rainbows.

What a wonderful world.

Iran pulls out the yellowcake

My unyielding reader was referring to the latest news out of Iran this week: The country’s energy chief said they have produced their first batch of yellowcake.

Regardless of how pessimistic you are of Iran’s nuclear intentions, nothing short of war will deter their ambitions. (Sanctions have worked perfectly so far, haven’t they?)

As I told him, the nuclear renaissance is inevitable.

It would certainly help bridge the gap from oil to his renewable future.

By 2020, China wants at least 15% of the country’s energy to come from non-fossil fuel sources. And even China’s goal for a cleaner energy source won’t come without a little nuclear help.

That’s why the country has about 30 nuclear power plants under construction. In ten years, China is expecting to meet approximately 7% of its energy needs through nuclear power.

Some of you may even remember their plans to mine the moon for Helium-3. However unlikely, it won’t stop them from trying.

Don’t let their [reported] 263 billion barrels of oil fool you. Regardless of how shady their books are, even if we assume they do have that much oil, it would be naïve to believe the Saudis don’t have nuclear aspirations of their own.

They recently announced plans to develop their nuclear program to meet rising demand. By 2030, the country could need as much as 40 GW of baseload power, which could easily be met by nuclear plants.

After mentioning this to my disconcerted reader, I couldn’t help notice his lack of concern — as if the only evil can come out of Iran.

Besides, why wouldn’t the U.S. help out the Saudis?

They’ll gladly keep shipping us a million barrels of oil every day.

This week, South Korea announced plans to build 14 new nuclear reactors by 2024. They’re planning to trim the fat on energy imports. That’s probably a good idea, since the country is meeting 97% of their energy demand from overseas.

That’s going to change, and South Korea is hoping to meet half of that energy demand through nuclear means.

The opportunity certainly isn’t falling on deaf ears. All year, my cubicle cell-mate Nick Hodge has been delivering nuclear profits, time and again.

At this point, my disgruntled reader started nodding his head in agreement. Perhaps he wasn’t as stubborn as I’d originally thought…

It’s only a matter of time before the U.S. catches the nuclear fever.

U.S. Energy Secretary Steven Chu came out swinging, saying utilities should generate 25% of their electricity from cleaner energy sources in 2025, and 50% by 2050.

Also consider that a nuclear plant hasn’t been built on U.S. soil in the last three decades.

Another easy way to get a piece of the action is through the nuclear ETFs that are available.

As you can see below, the last six months have delivered for nuclear investors… 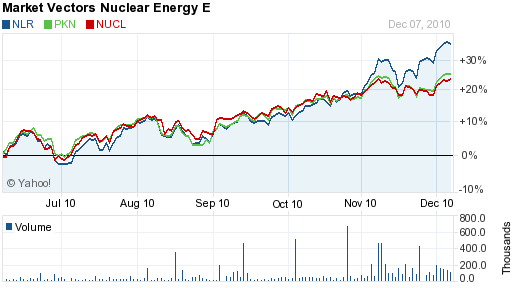 Next week, I’ll show you two more ways to play this nuclear renaissance — including five nuclear stocks worth more than just a second glance.