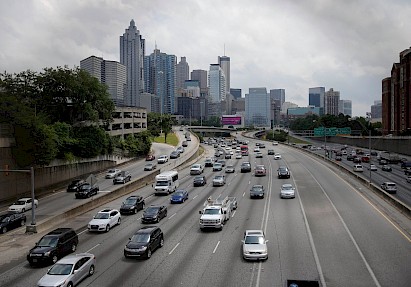 The program reflects a compromise by the Biden administration and a bipartisan group in Congress that pushed the $1.2 trillion infrastructure package over the finish line after months of political haggling. Though the transportation sector accounts for the largest share of U.S. carbon emissions, partisan divisions over addressing climate change have limited federal action.

Instead of requiring states to meet specific emissions goals, or face consequences — an approach favored by a House majority but rejected by Senate Republicans — the new “Carbon Reduction Program” simply requires that states pursue projects and policies that reduce on-road emissions while they tap five years of funding.

The possibilities were set out in the law and detailed in new guidance for states released Thursday by the Federal Highway Administration. They include decreasing highway congestion, collecting electronic tolls, making streetlights more efficient, electrifying truck stops, building bike lanes and pedestrian trails, reducing exhaust near ports and improving transit.

States are, in turn, required to draw up a broader strategy for lowering emissions. The plans, due Nov. 15, 2023, are not binding and the money will flow regardless of whether they achieve their objectives.

But the Biden administration and congressional supporters of the new program say examining local transportation systems will be eye-opening for many states and illuminating for the federal government as the nation wrestles with ambitious carbon reduction targets outlined by the administration. Those plans calls for cutting emissions by at least half compared with 2005 levels by 2030.

“Some states are actually way ahead of us federally, in terms of their level of climate ambition and the creativity that they’ve brought to this and the steps they’ve taken. Others, we’re pulling along and really working to encourage them,” Transportation Secretary Pete Buttigieg said in an interview Wednesday. He added that Washington will benefit from the “laboratory effect” across different states. “No one unit of government, including ours, has all the answers on how to do this most cost-effectively and efficiently.”

Sen. Thomas R. Carper (D-Del.), chairman of the Senate Environment and Public Works Committee, said including a climate section in the infrastructure bill — which also included billions for electric vehicles and protecting the transportation system against climate threats — represents a bipartisan win.

“This is the first highway formula program that dedicates funding to address the effects that roads and highways have on our climate. … It’s a huge impact,” he said. He added that it’s important “we invest in projects that will reduce carbon emissions, while at the same time making more communities more livable and more resilient to the effects of extreme heat and of flooding.”

The Carbon Reduction Program’s scope and ambition are sweeping, even as its accountability mechanisms are limited.

The new guidance encourages states to consider emissions in their land-use decisions and long-range plans, helping to shape how roads are designed and how people get around. States aren’t required to measure their emissions savings as a condition of receiving funds but are encouraged to collect data on their efforts and can spend some of the money for that purpose.

Some local officials voiced skepticism about the soft approach.

“States that rely heavily on fossil fuel based industries may develop plans that do not meaningfully seek to reduce emissions,” according to comments submitted by the city of Austin. A spokesperson for the Texas Department of Transportation did not immediately respond to questions about its plans under the program.

Transportation departments in Idaho, Montana, North Dakota, South Dakota and Wyoming asked the Transportation Department to make lower-emissions construction techniques eligible for the funds, according to a federal filing. The Federal Highway Administration guidance said such projects may be eligible, citing “sustainable pavements technologies that reduce embodied carbon during the manufacture and/or construction of highway projects.” States would have to demonstrate that such materials lead to “substantial reductions” in carbon emissions compared with “typical pavement-related practices.”

Those five states also raised concerns that federal officials could, outside the bounds of the Carbon Reduction Program, put in place new “performance measures” tracking greenhouse gas emissions, which they said “would not achieve much in our circumstances other than to subject our departments to regulatory burdens.”

The Carbon Reduction Program can also include projects supporting “congestion pricing,” where tolls might be imposed to reduce the number of single-occupant vehicles pouring down congested routes into a city, an idea advanced by some environmental and pedestrian advocates.

At the same time, money can also be used to “support deployment of alternative fuel vehicles.” That could include electric vehicle equipment, as well as “hydrogen, natural gas, or propane vehicle fueling infrastructure,” according the Federal Highway Administration guidance, which would produce significant fossil fuel-based emissions.