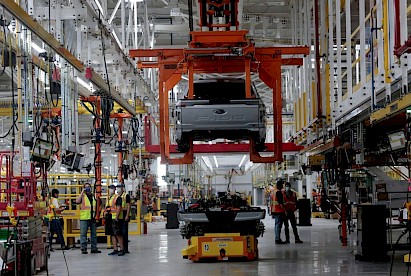 This week, as the world’s leaders gather in New York for the U.N. General Assembly, the United States will deliver a message many thought was not possible: We are going to cut greenhouse gas emissions in half by 2030, and zero them out by 2050.

Over the past 20 months as America’s first-ever national climate adviser, I have witnessed a paradigm shift: The private sector no longer sees climate action as a source of job losses, but rather as an opportunity for job creation and economic revitalization.

It’s a striking shift after four years of the Trump administration, which threw science out the window and backed out of the Paris climate agreement. In 2020 the future seemed grim. But today, states and companies across the country are running toward a clean energy future. How did what was once considered impossible become not just feasible, but at the core of America’s manufacturing and economic resurgence?

In my early days as administrator of the Environmental Protection Agency, auto dealers were predicting that shifting to cleaner cars meant vehicle costs would skyrocket and sales would drop, while the autoworkers and steelworkers talked about plant closings and layoffs. Even very early on in the Biden administration, when labor was fully engaged and squarely at the table, the old paradigm that cleaner standards meant job loss was hard to break. And unions worried that a big shift to electric vehicles could pose a fundamental threat to their workers.

But quickly the conversation shifted to one of long-term capital investments in E.V. technologies, expanding domestic manufacturing, growing more union jobs and building an E.V. market that would reach 50 percent of new U.S. car sales by 2030. Just a short time ago this shift would have been dismissed as a fairy tale. Not anymore.

What helped change the conversation were the voices of young leaders as the impacts of climate change worsened. Severe wildfires are burning down homes, floods are sweeping through communities and extreme heat is threatening lives and livelihoods, especially for low-income communities.

Public and private investments in research and development have also fueled the growth of clean technologies, driving down the costs and attracting industry. Since 2010, the cost of solar energy has decreased by 85 percent, wind energy by 59 percent onshore and 71 percent offshore, and lithium-ion batteries by 89 percent. It’s projected that by 2030, over 120,000 wind turbines will provide clean energy to America’s homes, businesses and communities, and nearly a billion solar panels will be operating in America.

As technologies advanced and companies saw the potential to profit, the private sector looked to the government for clear signals and sound policies. In time, governors of blue and red states, and mayors of cities across the country, started running toward clean energy goals with benchmarks for clean power.

When President Biden came into office, he signed executive orders that created timetables and milestones for every sector of the economy and mobilized his entire administration toward this goal. The president sent clear signals to the private sector that clean energy was the future, and they needed to be all in. Autoworkers, steelworkers and the automakers were now ready to come to the table, alongside climate advocates, farmers, workers, environmental justice activists, and more.

Then, we secured the historic Inflation Reduction Act — the most aggressive action on climate in U.S. history. When President Barack Obama took office, there were 500 charging stations nationwide. Now, thanks to President Biden’s Bipartisan Infrastructure Law, we plan to install 500,000 chargers across the country. Every major automaker signed on to the president’s goal of achieving 50 percent E.V. sales nationwide by 2030, a goal considered laughable just two years ago.

The United States is now becoming a magnet for clean energy innovation and investment. Since President Biden took office, companies have invested nearly $85 billion in manufacturing of electric vehicles, batteries and E.V. chargers in the United States. The U.S. is now on track to triple domestic solar manufacturing capacity by 2024, and in 2021 alone, investors announced $2.2 billion in new funding for offshore wind supply chains.

But make no mistake: We have a long way to go. The task of completely reshaping our economy is daunting, especially in a country as vast and complex as ours.

Take the U.S. manufacturing sector, which produces materials like steel and cement, which are critical to rebuilding our nation’s infrastructure. It has relied on a fossil-fuel based system for nearly 200 years, so reshaping the system means ensuring that these industrial workers get the training and resources to build the clean energy economy.

Now, we have a “Buy Clean” initiative, which includes the support of the Steelworkers Union, to leverage the federal government’s procurement power for low-carbon steel, concrete, asphalt and glass. The challenge before us is aligning these massive supply chains, from the buyers to the sellers, in a way that allows us to run faster.

While America has made tremendous progress, we need a harmonized global effort to confront climate change. When I see one-third of Pakistan submerged by extreme flooding, or over 700 million people globally without access to power, I am alarmed by how these basic human challenges of health and wellness will make the transition away from fossil fuels hard. The shift in America is not easily replicated in many parts of the world. And to get where we need to go, we need the entire world to run together.

The road is still long, and progress will be uneven. But as I leave my post in the White House, I am optimistic that America is now poised to lead this decisive decade.