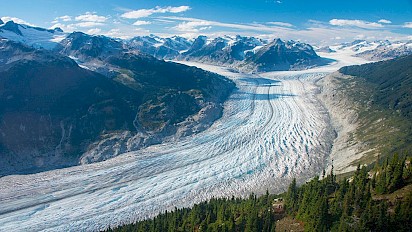 A drive through the Canadian Rockies will treat you to views of blue mountain lakes, wildlife and, of course, glaciers.

But with our changing climate and warming winters, glaciers are receding at an alarming rate in Canada and around the world.

Globally that will impact sea levels while here on the Prairies, the loss of our Rocky Mountain glaciers will affect our freshwater supply.

“We’re past the tipping point for the glaciers in the Canadian Rockies,” says John Pomeroy, professor and Canada Research Chair in water resources and climate change at the University of Saskatchewan.

Pomeroy says over the last few decades, almost all the world’s glaciers have shrunk and the rate of decline is accelerating.

“Even if somehow, magically, we’re able to stop global warming tomorrow and return the atmosphere to more normal CO2 concentrations, we would lose most of the Rockies’ glaciers.”

Hot weather like we experienced last summer doesn’t have an immediate impact on glaciers but will be seen in melt rates of the future.

Pomeroy believes the massive Columbia Icefield, located between Banff and Jasper, will survive past the end of the century.

He sees a less promising future for the Peyto Glacier, about 45 kilometres north of Lake Louise, which could all but disappear by 2030.

“The glaciers, as you can see from the highways, are probably finished. By mid-century, the Icefields Parkway, people may begin to wonder why it’s named that.”

Life cycle of a glacier

Glaciers form in areas like the upper elevations of Alberta’s mountains, where thick snowfall compacts into ice. When that ice gets thick enough, it will flow downhill under its own weight. Once it starts to flow, it’s called a glacier.

“You can think of a glacier as a reservoir of water in the form of ice,” says Jeff Kavanaugh, a University of Alberta associate professor who researches glacier dynamics and their response to climate change.

Each year, snow is added to a glacier and then melts away, feeding rivers like the North Saskatchewan, Athabasca and Bow.

When the melt exceeds the snowfall, the glacier begins to recede.

That recession can be seen through satellite images, aerial photographs, and even land-based pictures taken more than a century ago.

Kavanaugh expects between 60 and 80 per cent of the ice volume in B.C. and Alberta will be lost by 2100.

A deep purple algae, likely linked to forest fires, has been collecting on Canadian glaciers over the last few decades. The algae looks like dark dust and causes the glacier to absorb solar energy, causing even more rapid melting.

“I went through my photographs in the 1970s and ‘80s just to make sure I wasn’t dreaming,” says Pomeroy.

“Glaciers were very, very white back then. And they’re not like that now.”

Pomeroy says the algae problem is still not fully understood but there is a connection between ice and fire.

After the severe fire season in 2018, glaciers remained dark well into 2020, he adds.

“The algae has colonized the glaciers because of the forest fires, soot, the organic matter, the carbon,” he says.

“Perhaps it occurred with the soot, perhaps they were always there, but they didn’t bloom as much because they didn’t have the food source before. But they certainly are now.”

Strain on our rivers

What does all this mean for our water supply?

Kavanaugh says glaciers keep our rivers flowing when other water sources dry up, like late summer when the snowmelt is gone and rainfall is at its weakest.

“They carry us through the hottest months into the winter.”

“Though the streams that relied on the snowpack and groundwater dropped to very, very low levels, the streams that were fed by glaciers — like the Athabasca River or the North Saskatchewan — had very high flows,” Pomeroy says

The next few decades could be marked by high flows in our glacial rivers, which will continue as long as the glaciers are voluminous enough to contribute a lot of water, Kavanaugh says.

“We might have a 20-year window of this much water and then it will start to fall off a cliff,” he says. “How much water is flowing through the river as a function of that time of year is going to start changing remarkably.”

As we see a change in precipitation from snow to rainfall, snowpacks will melt earlier, meaning streamflow will shift earlier.

“We can look a little bit south and see what happens in Montana and Idaho already as they’ve essentially lost their glaciers,” says Pomeroy.

“Things get very, very dry when they get into a drought period.”

What’s hiding in the melt?

Alison Criscitiello, director of the U of A’s Canadian Ice Core Lab, has been studying environmental contaminants that are locked up in the snow and ice in the Rocky Mountains.

“It’s sort of become a catchment for contaminants,” says Criscitiello.

Legacy contaminants like DDT are starting to melt out of the snowpack, she says. “This has become a concern.”

Criscitiello’s research is a proactive study — a way to see what’s actually up in the snowpack before it comes downstream. It also helps illustrate connections in our water cycle.

“Some of the work that I’ve done in the last few years in the Canadian Arctic with colleagues at Environment Canada have been looking at these same contaminants, and we are finding them in the very most remote northern parts of the north as well.”

And as we see more melt of the snowpack, we could see more of those contaminants making their way downstream.

“If the glacier ice underneath is thousands of years or much older than that, we’re talking about pre-industrial and clean. It’s the firn [ice in between snow and glacier ice] and the snowpack that’s post-industrial. So if that’s the part that’s sort of increasing in meltwater runoff, we care about that.”

Criscitiello says the real question is how long it will take for the snowpack from the ’70s, ’80s and ’90s to reach downstream.

It’s one thing to hear about glaciers melting away or viewing before-and-after photos. But some people see change happening from one year to the next.

Peter Lemieux has been exploring the glaciers in the Rockies since the late ’70s, and in 1985 began leading tours with his company, Athabasca Glacier IceWalks.

“When you first step onto a glacier, it looks very static,” he says.

“But over time you begin to realize that there’s always stuff going on — avalanches in the surrounding area, water flowing on the surface, ice cracking. Things that make it actually a living thing.”

He likens watching changes in the glacier to watching his now 24-year-old son growing up.

“There’s a ton of changes. But on a daily basis, you might not notice it.”

He remembers walking just a few hundred metres to get to the glacier. Now it’s closer to a kilometre.

And while his own relationship with the Athabasca Glacier is long, Lemieux has heard stories from people who travelled the area almost 100 years ago.

“They came on horseback from Lake Louise. When they came into that valley where the glacier is, the ice was very close to the present day highway, which is well over a kilometre back.”