About a month ago, two of the world’s richest men abruptly visited the country’s least populated state.

You probably didn’t hear about it.

With seemingly only local fanfare, Warren Buffett and Bill Gates took a one-day trip to Gillette, Wyoming, the self proclaimed “Energy Capital of the Nation.”

A local news outlet said the duo rolled into town with “an armada of nine private jets.”

And even though the Oracle declined to be interviewed by the local paper, the reason for the visit didn’t remain hidden for long…

In the age of Facebook and Twitter — and now, Wikileaks — secrets are getting harder and harder to keep.

It didn’t take employees of the Black Thunder Mine long to tell the social media universe two billionaires were taking a tour of their mine.

This is where it gets interesting…

For starters, the Black Thunder Mine is owned by Arch Coal (NYSE: ACI).

Obviously, the first word that comes to mind is buyout.

And the market agrees. Arch is up 40% in the past six months, with 30% coming in the weeks after the November 7th visit. 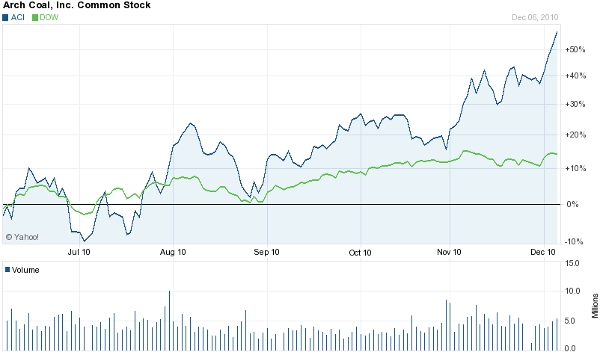 Second, when local journalists placed calls to Arch Coal for more info, they were told media inquiries were being handled by Burlington Northern Santa Fe Railway and Berkshire Hathaway, both Buffett-owned.

So, is coal this year’s hot Christmas gift?

What’s Bill got to do with it?

It’s hard to say, especially since he gave a TED speech a few months ago in which he said coal and natural gas should be phased out by 2050.

And here’s his response in the November issue of Rolling Stone to a question about the future of clean coal:

America’s Power [a coal-industry PR group] has these ads recently where they’re talking about “clean coal.” But there are a number of steps required to do that, and they aren’t really being done.

Was Bill just keeping his altruistic friend company… Or is there something deeper going on?

Sure, Bill thinks coal should be phased out by 2050. But he’s probably not opposed to making a few (billion) bucks as its time runs out.

He and Warren aren’t strange bedfellows by any means. In fact Warren pledged to give the Bill and Melinda Gates Foundation 10 million shares of Berkshire in 2006.

Gates is either interested in a tandem coal deal, or he’s doing reconnaissance for an energy venture of his own.

Either way, coal is more expensive now than it has been at any time during the past two years. In the United Kingdom, coal-fired power plant operators are actually switching to wood pellets.

According to Bloomberg, “Using coal to make a megawatt hour of electricity in the UK costs $53.60, compared with $52.47 for wood.”

With the 40% rise in prices this year, utilities are reporting a 70% drop in returns from coal-fired electricity profits. In March, utilities were actually losing $9.45 for every megawatt-hour generated from coal.

Now, the rush is on to convert as many coal-fired power plants to biomass as soon as possible.

Urged on by Prime Minister David Cameron, utilities in the UK plan to more than double biomass capacity by 2014. When that happens, six million homes formerly powered by coal will be powered by renewable biomass.

(The macro point here is that as fossil fuels become more expensive, renewable alternatives — from wind and solar to geothermal, smart grid and, in this case, biomass — become more and more competitive.)

Demand for biomass in Britain is so high that it’s turning to imports from Russia, Scandinavia, and North America.

Fueled by the need for steel in China, cheap money for the banks to buy commodities, and the speculation of a global recovery, commodity prices have been rising across the board.

Buying forestry companies or a coal ETF would’ve put you well ahead of the Dow over the past six months. 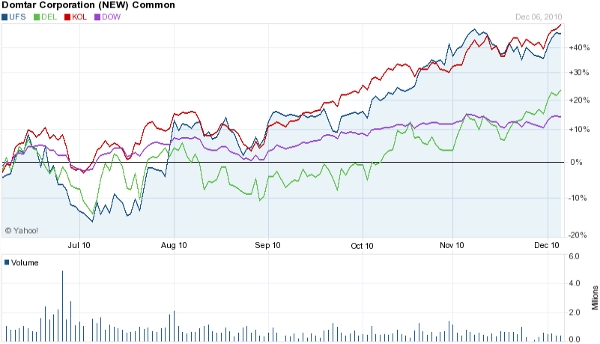 Not only are coal and biomass prices on the rise, but oil is at a two-year high as well, closing in on the $90.00 mark.

A seven-year gulf drilling ban, a new peak oil declaration from the IEA, cold weather, and political pressure on fracturing will make sure it gets there.

The best way we’ve found is an untapped field of 600 billion barrels located in Central Asia.

China is willing to pay a premium for the oil, and the $1.50 company with exclusive access to it is already up more than 500%. That will turn into thousands of percent as the oil is extracted and sold to the commodity-hungry Chinese.

It’s exactly what Bill and Warren are planning to do with coal — only you have access to these profits right now.