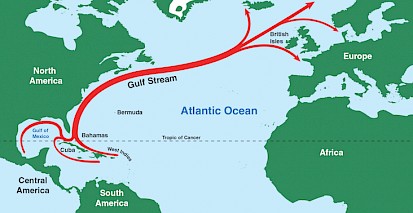 The Atlantic Ocean’s current system, an engine of the Northern Hemsiphere’s climate, could be weakening to such an extent that it could soon bring big changes to the world’s weather, a scientific study said on Thursday.

The Atlantic Meridional Overturning Circulation (AMOC) is a large system of ocean currents which transports warm water from the tropics northwards into the North Atlantic.

As the atmosphere warms due to increased greenhouse gas emissions, the surface ocean beneath retains more of heat. A potential collapse of the system could have severe consequences for the world’s weather systems.

Climate models have shown that the AMOC is at its weakest in more than a 1,000 years. However, it has not been known whether the weakening is due to a change in circulation or it is to do with the loss of stability.

The study, published in the journal Nature Climate Change, said the difference is crucial.

“The loss of dynamical stability would imply that the AMOC has approached its critical threshold, beyond which a substantial and in practice likely irreversible transition to the weak mode could occur,” said Niklas Boers at the Potstdam Insitute for Climate Impact Research and author of the study.

By analysing the sea-surface temperature and salinity patterns of the Atlantic Ocean, the study said the weakening of the last century is likely to be associated with a loss of stability.

“The findings support the assessment that the AMOC decline is not just a fluctuation or a linear response to increasing temperatures but likely means the approaching of a critical threshold beyond which the circulation system could collapse,” Boers said.

If the AMOC collapsed, it would increase cooling of the Northern Hemisphere, sea level rise in the Atlantic, an overall fall in precipitation over Europe and North America and a shift in monsoons in South America and Afria, Britain’s Met Office said.

Other climate models have said the AMOC will weaken over the coming century but that a collapse before 2100 is unlikely.