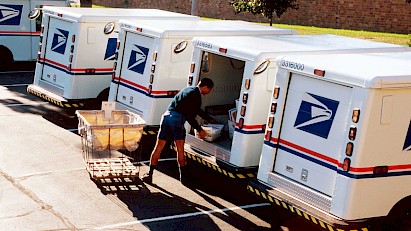 Sixteen states, the District of Columbia and environmental activist groups are suing the U.S. Postal Service to block its purchase of 148,000 gas-guzzling delivery trucks over the next decade, alleging the agency has vastly underestimated the vehicles’ costs and adverse ecological impact.

The suits brought by the state attorneys general, Earthjustice and the Natural Resources Defense Council contend that the mail service relied on faulty assumptions and miscalculations to justify spending as much as $11.3 billion on gas-powered vehicles that get 8.6 mpg, which is only incrementally better than the 30-year-old vehicles now in use.

Postal officials hoped the truck procurement would go smoothly and signal that the mail agency was evolving to meet new business opportunities and joust with its private-sector rivals. But the agency’s purchase plan would have only 10 percent of the new fleet dedicated to electric power, well below benchmarks set by FedEx, UPS and Amazon.

Transportation is the single biggest source of greenhouse gas emissions in the United States, but electric vehicles have yet to make significant inroads. EV proponents had hoped the Postal Service contract would provide a lift for electric automobiles, which account for about 5 percent of all new-vehicle purchases.

Although there’s wide consensus on the necessity of new mail trucks, the deal the agency struck with Oshkosh Defense in 2021 was criticized by environmental groups, which said its marginal commitment to EVs was insufficient. Meanwhile, organized labor groups chafed at the company’s decision to move manufacturing away from unionized shops.

Postal Service spokeswoman Kim Frum, in an emailed statement, said the agency “conducted a robust and thorough review and fully complied with all of our obligations under environmental law.”

The Postal Service began studying the environmental impacts of the vehicles — which federal regulators estimate would emit roughly the same amount of Earth-warming carbon dioxide each year as 4.3 million passenger vehicles — after paying Oshkosh $482 million to begin production. The suits allege the agency conducted its analysis to retroactively justify its procurement decision.

Postmaster General Louis DeJoy placed the agency’s first order for 50,000 trucks in March; 10,019 of those vehicles will be electric, roughly double DeJoy’s original commitment. They are expected to hit the street by the end of 2023.

“The Postal Service has a historic opportunity to invest in our planet and in our future. Instead, it is doubling down on outdated technologies that are bad for our environment and bad for our communities,” said California Attorney General Rob Bonta (D), whose office is leading the states’ case in the Northern District of California.

“Once this purchase goes through, we’ll be stuck with more than 100,000 new gas-guzzling vehicles on neighborhood streets … for the next 30 years. There won’t be a reset button,” he said in a statement. “We’re going to court to make sure the Postal Service complies with the law and considers more environmentally friendly alternatives before it makes this decision.”

Regulators from the Environmental Protection Agency and White House Council on Environmental Quality have found serious deficiencies with the Postal Service’s environmental study. They said the agency significantly underestimated the cost of the gas-powered vehicles — it projected fuel prices at $2.19 per gallon, nearly $2 less than the U.S. average this week — and how their emissions could worsen the climate crisis.

In an interview last month, DeJoy said that “the economics that my team has come up with” are sound and support his agency’s purchase plan.

“That is the math that we are going with,” he said.

The 10 percent electric commitment also falls well short of the White House’s and environmental activists’ goals. President Biden has called for the entire federal civilian fleet to go electric by 2035. The mail agency’s 217,000 vehicles make up the largest share of the government’s nonmilitary vehicles.

“The crux of this case is that the Postal Service performed its environmental analysis too late, and even the analysis it did prepare was incomplete, misleading, and biased against cleaner vehicles,” Earthjustice attorney Adrian Martinez wrote in his complaint. The group is suing on behalf of the Sierra Club, Center for Biological Diversity and Clean Air Now, a Kansas-based nonprofit.

“Astoundingly, the Postal Service signed a contract and paid millions of dollars for these vehicles first, before beginning its environmental analysis to justify its action, in blatant violation of the National Environmental Policy Act,” the suit continues. “The Postal Service’s improper action will not only needlessly pollute every American community for decades to come, but it will also cost millions more in taxpayer funds and leave the agency vulnerable to fluctuating fuel prices.”

The nearly 1-million-member United Auto Workers union joined NRDC’s suit in the Southern District of New York. UAW leaders have objected to the contract since Oshkosh announced it would build the trucks in a new non-unionized factory in South Carolina rather than its unionized flagship facilities in Wisconsin.

“What we’re asking the court to do is make them go back and redo the environmental analysis,” said Frank Sturges, an attorney for NRDC. “What the Postal Service actually buys, who they contract with, is a decision that should come out of the analysis after a victory in our case.”

DeJoy has said his agency will buy more electric trucks if Congress allocates the money or if the Postal Service’s financial situation improves. The agency has long struggled with its finances after years of declining mail revenue, but Biden recently signed legislation to relieve $107 billion in past-due and future amounts from its debt burden.

DeJoy told The Post in March that the Postal Service did not have enough knowledge or experience with electric vehicles when he took office in June 2020 to pursue more EVs in the truck procurement.

In the meantime, he said, the agency is running trucks that do not have air bags or air conditioning and have been known to catch fire after years of overuse. “We needed to buy trucks,” DeJoy said.