The world’s largest tire graveyard in Kuwait in flames 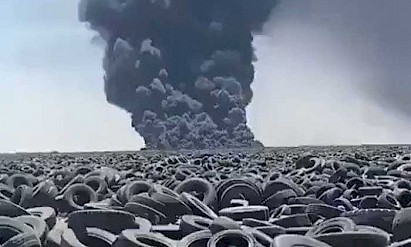 This month, it was reported about the battle of Kuwait authorities with illegal tire dumping site in a desert, the Al Sulaibiya. This is the largest tire dump in the world. The tire crisis has been ongoing for over 30 years. The Environment Public Authority (EPA) in Kuwait was able, according to an official in the authority, to remove 95% of the tires. An EPA official revealed that a big amount of tires has been transferred to alternative lands in Salmi.

Recently, a massive fire broke out at the famous tire dump in the Al Sulaibiya, Insider Paper reported on 3 August.

7 million fires were engulfed in flames of a massive fire at the world’s largest tire dump at the Al Sulaibiya in Kuwait. It was possible to see the blaze from the satellite images shared via Twitter accounts.

Fires at Kuwait’s tire dumps take place quite often, that’s why it is sometimes challenging to identify the exact location of a tire incident shared in an image or video. Some social media users commented that the site from the video could actually be shot from the world’s famous tire graveyard Al Sulaibiya.