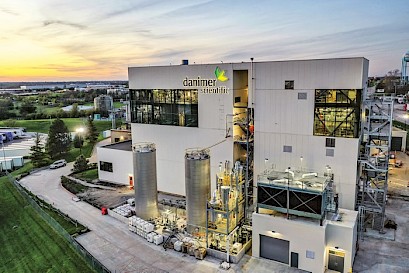 Encouraged by Downey, Carraway pitched his biodegradable biopolymer as the solution to the plastic waste crisis. “We have to clean up the mess we made,” Carraway said. “But we also have to stop making the mess.” The plastic industry has been trying to establish a recycling infrastructure since the 1970s, he noted, but it “just doesn’t work.”

Carraway and other proponents are hyping polyhydroxyalkanoates, known collectively as PHA, as the next big thing, but they are hardly new. Nature has used this class of polymers to store cellular energy for millions of years. Companies have been trying to commercialize them—via industrial fermentation—for several decades. But despite what should be a strong selling point—biodegradability in a wide range of environments—they haven’t taken off. The list of companies that have tried and failed to bring PHA to market keeps growing.

This time, boosters of the polymer maintain, will be different. The world has changed, they say. Cities are banning plastic straws and take-out containers, and PHA is a responsible alternative. Large consumer product companies are clamoring for biodegradable packaging. Indeed, PHA Skittles bags and Bacardí rum bottles are due out in stores soon.

Danimer Scientific, the firm responsible for those applications, puts the addressable PHA market at 230 million metric tons (t) per year—more than half the world’s plastic demand. Meanwhile, the PHA industry is still in its infancy, with capacity of less than 1 million t.

Detractors, however, warn that it won’t be easy for PHA to compete with the likes of polyethylene and polypropylene. PHA’s biodegradability is overhyped, they say. And the biopolymer is too expensive to compete with petrochemicals on a large scale. Regardless, all eyes are on PHA.

The company leading the current charge for PHA is Danimer. The firm, based in Bainbridge, Georgia, started as a polylactic acid compounder and bought its PHA fermentation technology from Procter & Gamble back in 2007.

Only recently has the PHA business begun to gain significant traction for Danimer. The company opened its first commercial plant, in Winchester, Kentucky, last year. It can make 9,000 t per year and is being expanded to about 30,000 t by next year.

Danimer says it is struggling to keep up with forecast demand. The first plant, it projects, will be running at full capacity by the end of this year. Danimer is close to having the output for the expansion reserved by customers as well, CEO Steve Croskrey says. “If you count pending contracts, we’re there.”

The firm’s biggest-volume product right now, Croskrey says, is resin for drinking straws used in jurisdictions that have banned straws made from petrochemical plastic. Its sales may soon shift toward packaging. Mars Wrigley plans to start selling Skittles in PHA bags by early next year. Bacardi plans to introduce PHA liquor bottles in 2023, replacing 3,000 t per year of conventional plastic. Danimer has also been working with PepsiCo’s Frito-Lay unit on snack bags.

Danimer went public last year through a merger with a special purpose acquisition company. Such SPACs, now trendy, are shell companies that raise money in the stock market on the promise that they will buy a high-growth firm.

The SPAC transaction “gave us a little more certainty about the future and allowed us to focus on customers and construction and things like that, as opposed to fundraising,” Croskrey says. Flush with the $380 million it raised, Danimer ratcheted up its growth agenda. It unveiled plans for a $700 million plant to open in Georgia by 2024 with more than 113,000 t per year of PHA capacity.

But Croskrey quickly learned that going public has its downside. Danimer is now facing much more scrutiny than it ever did as a private company. Recent months have brought an exposé from the Wall Street Journal of its biodegradability claims and a series of reports from an investment firm alleging that Danimer executives are hyping the firm’s prospects.

The Wall Street Journal report, published in March, looks at claims such as the one Bacardí made of its PHA bottle: that it would biodegrade in 18 months. This claim was extrapolated, the article states, from laboratory tests on PHA sheet under ideal conditions. The article also spotlights a Danimer statement that PHA would biodegrade in landfills—not particularly an environmental benefit when garbage isn’t supposed to degrade in landfills.

A month later, Spruce Point Capital Management targeted Danimer. Spruce Point is a short seller, an investment firm that bets a company’s stock will decline. Short sellers will often issue reports designed to sour opinion about a company and push its stock price down.

Spruce Point combed through all the information about Danimer it could find. It even obtained Danimer’s production numbers through a Freedom of Information Act request for environmental records from the Commonwealth of Kentucky.

It issued a report alleging, for example, that the company has financial ties to University of Georgia scientists who wrote complimentary studies about Danimer’s technology. It mentions that PepsiCo, which had been a Danimer investor, sold its shares in the company shortly after it went public.

The report chides Danimer for missing construction targets in Kentucky. It highlights Danimer’s admission, made during an earnings call, that only 10% of its planned production in Georgia is reserved under contract, despite assurances that the new plant will be sold out. And from the Kentucky environmental figures, Spruce Point gleans that Danimer is running at only 66% of capacity.

The report also compares Danimer to Metabolix, a public company that has become a cautionary tale in PHA. A decade ago, Metabolix seemed to have everything going for it, including a 50,000 t per year PHA joint venture in Iowa with Archer Daniels Midland. But the partnership struggled to sell even 1% of that capacity, and ADM pulled the plug in 2012.

Metabolix sold its technology to CJ CheilJedang in 2016. The South Korean firm is now building a plant in Indonesia.

Spruce Point’s founder, Ben Axler, says he learned about Danimer from the Wall Street Journal story and decided it needed more attention. “We are trying to fill a gap in the traditional research that comes out of the Wall Street investment banks,” he says, adding that such analysts “tend to take management’s claims at face value.”

One prominent analyst covering Danimer, Laurence Alexander of Jefferies Financial Group, was bullish on the company when it went public and remains so after the Spruce Point reports. In his most recent note to clients, for example, Alexander writes that the coming shift toward commercialization “will be a positive one” for the company.

Short-seller reports can be influential. In 2019, the Italian company Bio-on was riding high. It ran a small plant in Bologna, Italy, that produced PHA from molasses and sugar beet by-products. It launched a line of sunscreens with Unilever that incorporate PHA micropowders. And it signed licenses for its technology in Italy, Spain, France, Mexico, and Tatarstan.

Then Quintessential Capital Management issued a report alleging that Bio-on was a “house of cards” that booked fictitious licensee revenue from its own shell companies. Bio-on declared bankruptcy later that year.

Danimer’s stock has lost nearly half its value since the Wall Street Journal article was published in March. However, its market capitalization of nearly $2.3 billion is about what it was when it went public.

Croskrey says he often gets asked about the downside of being a publicly traded company. “And, you know, the downside is clearly this kind of situation where people can attack a company that’s trying to do good and save the world from plastic pollution,” he says. “It should be criminal, but it’s not, unfortunately.”

Danimer released a three-page statement in May addressing the “misconceptions, falsehoods and speculation that have been circulating.”

Responding to Spruce Point’s criticisms, Danimer says the figures reported to the Kentucky government don’t reflect actual production because they measure polymer coming out of the fermenter before it is compounded with other ingredients and sent to customers. The firm also reiterates its projections for capacity expansions and its ramp-up in sales.

Croskrey adds that Danimer’s expansion plans were delayed to conserve cash during the pandemic, a defensive maneuver a lot of companies used in 2020. He also notes that Danimer continues to work with PepsiCo, which still has a seat on Danimer’s board.

Croskrey argues that Danimer has advantages Metabolix didn’t have. For instance, Danimer starts with a medium-chain-length PHA, which, he says, has more robust physical properties than the short-chain polymers Metabolix was developing. Moreover, the company, which has long been a major compounder of polylactic acid, has more applications expertise than Metabolix did.

Croskrey is standing his ground on biodegradability as well. “PHA is nature’s recycling program,” he proclaims. He says the polymer can degrade in landfills because most such facilities aren’t sterile. “PHA will go away in conditions where bacteria can thrive, regardless of where that is,” Croskrey says.

Industry watchers say PHA has traction in the marketplace, though companies shouldn’t hype it. Ramani Narayan, a chemical engineer at Michigan State University, says the biodegradability of PHA has at times been “oversold,” creating the impression that it will quickly disappear in the environment.

But, Narayan notes, PHA is one of the most biodegradable polymers on the market. A bottle that finds its way into the ocean “is going to last for several years before it’s going to be removed by microbial metabolism, which is better than polyethylene and polypropylene, which will keep on accumulating,” he says. “So there is value.”

Jan Ravenstijn, an independent biopolymer consultant and a veteran of Dow and DSM, says PHA might indeed be on the cusp of a high-growth phase, a transition many new polymers finally make after years of development. It took the polylactic acid maker NatureWorks 23 years to finally turn a profit, he notes.

Evidence for PHA’s transition is the blistering demand coming primarily from Asia. “Prices have tripled over the past 9 months or so,” Ravenstijn says. “They can sell much more than they can make at the moment.”

Ravenstijn says this demand is driving a raft of expansions from newer players like CJ, Kaneka, and a firm poised to become a US rival to Danimer: RWDC.

Carraway founded RWDC in 2015 with businessperson Roland Wee. Carraway was no newcomer to PHA, having established Danimer in 2004 with his wife, Meredith. Carraway sold most of his Danimer stake in 2014 and now has no connection to the company.

RWDC launched a 5,000 t per year demonstration facility in Athens, Georgia, earlier this year on the site of a former Invista fiber plant. It has begun construction on a 25,000 t unit that it hopes to open in 2023, also in Athens. It plans to build a similar-sized plant after that and possibly a plant in Singapore.

RWDC has a big customer lined up in Cove, a California company that aims to bring a biodegradable water bottle to the market later this year. Cove signed an agreement to buy 160,000 t over 5 years—most of the PHA that RWDC expects to make. Earlier this month, RWDC announced a partnership with Kimberly-Clark, a producer of diapers and other consumer products.

Carraway says the prospects for PHA are real and bright enough to accommodate RWDC, Danimer, and other players in the market. “There’s no single company that will be able to meet all the potential demand that’s out there,” he says.