Wildfires were so hot they cooled the planet 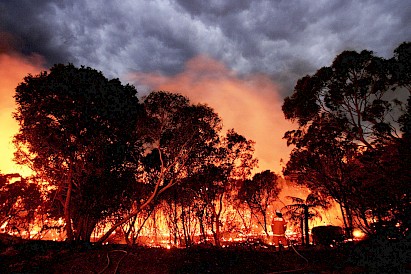 Wildfires are becoming so intense they could alter the Earth’s climate, though not always in expected ways, according to a study published yesterday in Geophysical Research Letters.

The bushfires that ravaged Australia in 2019 and 2020 were so intense they actually cooled temperatures in the Southern Hemisphere last year, researchers found. The counter intuitive effects came from massive amounts of aerosols and particulate matter the fires spewed into the atmosphere, making clouds more reflective of the sun’s rays and pushing tropical thunderstorms northward.

The study, conducted by scientists at the National Center for Atmospheric Research, suggests wildfires could alter the climate as they grow more intense in response to a warming world. The researchers likened the Australian brush fire’s climatic impact to a volcano.

“Wildfires are starting to affect climate,” said John Fasullo, a NCAR scientist and the lead author of the paper. “As the Earth warms, they are going to become more and more important in understanding our climate system.”

But, he added, “Understanding their broader role in the climate system and climate projections, that is not something we have a good handle on.”

The research does not mean wildfires could curb climate change. The location of a fire is important to determining its climatic impact. In the Northern Hemisphere, wildfires can speed warming. Ash falling in the Arctic, for instance, can accelerate ice melt by darkening the snow and absorbing the sun’s heat.

But the impact of the Australian bushfires was just the opposite.

Air quality is generally pristine in large swaths of the Southern Hemisphere. The bushfires added large amounts of aerosols into the atmosphere, changing the composition of clouds to make them more reflective of the sun’s rays. The cloud cover cooled the southern half of the planet, pushing tropical thunderstorms northward. The NCAR researchers estimate the fires cooled the planet 0.06 degree Celsius.

By comparison, economic lockdowns associated with the pandemic are estimated to gradually warm the planet 0.05 C by 2022. That, too, might appear counterintuitive.

Factories, power plants and cars emit carbon dioxide, which warms the planet over the course of decades. But those same facilities also emit aerosols, which block the sun’s radiation and can fall quickly out of the atmosphere. Those aerosols fell last year as factories ran less and cars remained parked, causing the planet to warm slightly.

The annual temperature fluctuations of both events are slight. More important are the long-term implications of increasingly intense fires, researchers said.

The impact of the Australian fires was similar to a major volcanic eruption, which can disrupt the climate by sending plumes of particulate matter into the sky, Fasullo said. But where volcanic eruptions of that magnitude tend to happen once every 30 years, fires like those that burned in Australia are expected to become more common.

That points to the need for more research into the climate impacts of fire, so it can be incorporated into climate models, he said.

“The way we’ve studied this so far has been really insufficient,” Fasullo said. “So that is what we’re doing now in our research.”