Enjoy the holiday hangover now, because it’s a whole new ballgame in 2011…

Just two years after 2008’s historic crash, triple-digit crude is once again on the horizon — and much closer than you might think.

If the bulls don’t yank the reigns back, we won’t have to wait for the summer heat to break over $100/bbl again. It could easily happen well before the summer driving season begins.

Even with the Department of Energy’s weekly oil report showing a 1.26 million barrel decline in inventory, prices are hovering just below $90 per barrel.

And as you can see below, our crude stocks are almost back to the five-year average: 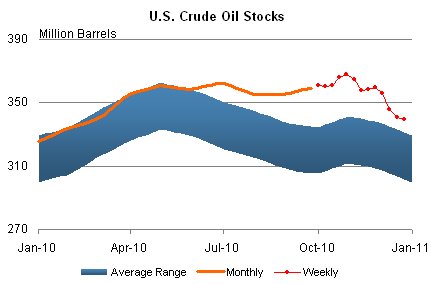 Of course, there are other reasons for investors to re-evaluate their energy positions…

Pushing the energy markets further in 2011

Let’s begin with an issue that people are finally warming up to: Peak Oil.

With nearly all of the world’s giant oil fields in decline, the majority of production will be shifting to smaller fields. In other words, say goodbye to the cheap, easy-to-get oil.

But that’s nothing new to us, right?

Just this week, Nick Hodge explained how OPEC members will try to cash in — and you can bet $100/bbl oil will play a part. The oil majors are certainly going to take advantage of it.

According to a survey by Barclays Capital, the major energy companies are expecting to shell out more than $500 billion on oil and gas exploration in 2011.

Where are they planning to spend that cash?

Take Occidental Petroleum Corp, for example. The company just announced plans to dump its Argentina operations and spend over $3.2 billion on crude and natural gas plays in both North Dakota and Southern Texas — i.e. the Bakken and Eagle Ford formations.

You probably remember earlier this year when Exxon Mobil completed their merger with XTO Energy. The $41 billion deal gave Exxon Mobil a stake in the U.S. shale boom.

The surge in shale activity over the last few years has even caught China’s attention, who has been spending billions buying up assets in Southern Texas.

So how exactly are you preparing for 2011?

Here are some of our ideas on how to get ahead of the new year:

The Secret Behind Petro-Fracking Technology: How Companies Are Unlocking Billions of Barrels of Oil
With the Shale boom well underway, the next challenge for companies lies in improving their production techniques. One company is perfecting its petro-fracking technology for drillers — and it’s already been utilized at more than 236 drill sites and counting, at nearly every major oil and gas shale deposit in North America…

Greenland’s Giant-Killer: How China Missed out on Billions
Whenever the Chinese lose out on $273 billion, you know they aren’t happy… And one tiny piece of Arctic wasteland just became the most valuable piece of real estate on the planet. The latest webinar from Editor Ian Cooper explains why it’s just the first round of profits to be made from rare earth elements.

Apple: Stock of the Year: Steve Jobs Delivers Another Great Year
Editor Steve Christ takes a look under the Christmas tree, naming Apple Inc. as his stock of the year.

Uranium’s Secret Comeback: Why Right Now is the Time to Acquire Uranium Assets
Analyst Luke Burgess discusses record highs for precious metals this past year, and what 2011 has in store for commodities.

The Best Oil Story of 2010 Just Got Better: Clearing the Air about Unconventional Oil
Editor Keith Kohl tells readers why the Bakken oil play is the best oil story of 2010 — and how you can stay ahead of this investment.

Junior Gold Stocks to Shine in 2011: Physical Bullion to Outperform all other Hard Asset Classes
Analyst Greg McCoach discusses this week’s jump in gold and silver prices and speculates on investing in junior mining stocks in 2011.