Why the debate over Russian uranium worries U.S. tribal nations 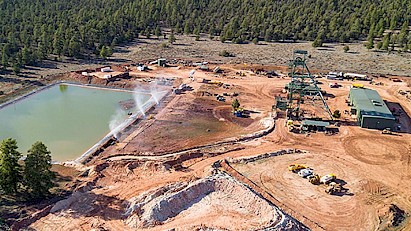 That dependence on Russia is breathing life into ambitions to resurrect the uranium industry around the American West — and also evoking fears of the industry’s toxic legacy of pollution. With some of the most coveted uranium lodes found around Indigenous lands, the moves are setting up clashes between mining companies and energy security hawks on one side and tribal nations and environmentalists on the other.

Arizona’s Pinyon Plain Mine, situated less than 10 miles from the Grand Canyon’s southern rim, is emerging as ground zero for such conflicts.

The Havasupai Tribe, whose people have lived in the canyonlands and plateaus of the Grand Canyon since time immemorial, call the area of the mining site Mat Taav Tiijundva — “Sacred Meeting Place” in a rough translation.

But since Russia’s invasion, mining executives have seen the site as something else: the tip of the spear in their jostling to advance American uranium projects.

“We have the ability to reduce dependence on Russian uranium right now,” said Mark Chalmers, chief executive of Energy Fuels, the Colorado company that owns Pinyon Plain and is fighting in court to ramp up uranium production.

The Grand Canyon went through a uranium mining boom in the 1950s that ebbed by the 1980s, when Pinyon Plain was built. Near Havasupai burial sites, and targeted by legal battles nearly since its inception, the mine has never been fully operational. But the mine produces water heavy in arsenic and uranium as a result of drilling several years ago that punctured an aquifer, provoking fears that the site could contaminate Havasupai water supplies.

“It’s easy to use this war as an excuse to advance this project,” Stuart Chavez, a member of the Havasupai Tribal Council, said about the Pinyon Plain Mine, which is one of several permitted uranium sites in states including Arizona, Utah and Wyoming that could quickly increase activity if sanctions are levied on Russian uranium. He contends that the United States could turn to Canada or other friendly nations to make up for Russian uranium if the imports end.

The predicament surrounding Russian uranium stands in contrast to Russian oil, which accounted for a relatively small flow of oil into the country before the ban on such imports. The United States still relies on Russia and two former Soviet republics, Kazakhstan and Uzbekistan, for nearly half the uranium needed to fuel American nuclear reactors.

Leaders in the American uranium industry, which has largely been in a slump since the 1990s, are seizing the moment even as resistance to their plans emerges in various parts of the West.

Talking about Indigenous leaders and environmental groups opposing the mining resurgence, Mr. Chalmers, the mining executive, said, “A lot of them would rather get uranium from Russia than mine our own.”

The Russian uranium imports originated in the Cold War’s aftermath. Aiming to curb the risk of nuclear war, the United States struck a deal in 1992 to buy enriched uranium that had been used in thousands of scrapped Russian nuclear warheads.

Called Megatons to Megawatts, the nonproliferation program lasted until 2013. Still, even when Russia annexed the Crimean Peninsula in 2014 and went on to invade Ukraine this year, the United States kept importing large quantities of Russian uranium.

As the Russian uranium sales took hold, the American uranium industry idled mines around the West, a result of the collapse of prices after the end of the Cold War arms race and of a slowdown in construction of new nuclear plants.

Now the industry is finding powerful support in Washington. Senator John Barrasso of Wyoming, a Republican, introduced a bill in March to ban Russian uranium imports partly as a way to revive American mines. Legislators in the House of Representatives, including Henry Cuellar of Texas, a Democrat, introduced their own bipartisan bill in March calling for a ban.

“A robust domestic supply chain for nuclear fuel has never been more important for our nuclear fleet,” Scott Melbye, the president of the Uranium Producers of America, a trade group, said in testimony before the Senate in March. “The sooner we decouple our nuclear industry from Russia, the sooner Western nuclear markets can get to work to fill the gap.”

The measures have not advanced in the Democratic-controlled chambers in large part because the United States still relies so heavily on Russian uranium. While energy sources like wind and solar are gaining ground, nuclear power makes up about 19 percent of the electricity produced in the United States, the world’s largest uranium consumer.

Plans for a new generation of advanced nuclear reactors, a potentially crucial source of carbon-free energy that the United States needs to reach climate goals, also depend heavily on Russia, which holds what some call a monopoly on the enriched uranium needed to fuel such projects.

A proposal for an emergency stockpile of uranium, supplied by mines in the United States, is also raising alarm even if sanctions on Russian uranium fail to materialize. The idea of a Strategic Uranium Reserve, a concept that originated during the Trump administration, is being examined by the Department of Energy and drawing some prominent support in Congress. It would require the federal government to buy uranium “newly produced in the U.S. from deposits at an existing site” such as Pinyon Plain.

“The possibility that this mine could go forward is unthinkable under an administration that has made promises to prioritize environmental justice,” said Amber Reimondo, energy director at the nonprofit Grand Canyon Trust.

As nuclear power companies seek ways to expand mining and jump-start the enrichment supply chain in the United States, opponents of Pinyon Plain warn it could produce an outcome similar to the hundreds of abandoned uranium mines still emitting dangerous radiation levels on Indigenous lands.

“This specific site is sacred for us, dotted with burial places and remains of homes and sweat lodges,” said Carletta Tilousi, a former Havasupai Tribal Council member who has been fighting the mine for decades.

Like other uranium projects around the country, activity at the mine was suspended in the 1990s when uranium prices crashed. But the mine’s owners managed to advance the project, even after the Obama administration announced a 20-year ban in 2012 on new uranium mining around the Grand Canyon.

Owners of the mine, which was grandfathered in before the moratorium, have prevailed in one legal challenge after another. In February, a federal appeals court sided with the U.S. Forest Service in a ruling against the Havasupai and three environmental groups seeking to prevent the mine from operating.

Mr. Chalmers, of Energy Fuels, called the ruling a victory for energy security, contending that the mine had enough uranium to provide the entire state of Arizona with electricity for one year.

“It’s the highest-grade uranium mine in the United States,” said Mr. Chalmers, who has extensive experience in Australia and former Soviet republics.

Eying uranium prices, which have shot up more than 30 percent since the war flared up, he also said that Energy Fuels was close to negotiating contracts to supply uranium to nuclear power plant operators in the United States. At the same time, he argued that the mine would not be harmful to the Havasupai.

David Kreamer, a professor of hydrology and an authority on groundwater contaminants at the University of Nevada, Las Vegas, disputed that assertion.

“I’m all for mining if it’s done responsibly with proper safeguards,” Dr. Kreamer said. But he called Pinyon Plain a potential “time bomb” that could have detrimental effects in a decade or so.

Dr. Kreamer said he was especially concerned about drilling activity at the mine that pierced an aquifer several years ago, releasing millions of gallons of water high in both uranium and arsenic.

To prevent the water from contaminating nearby areas, Energy Fuels is collecting it in a pool at the mine, where some of it evaporates. The company has also trucked the water nearly 250 miles to White Mesa, Utah, where the company owns the country’s only fully licensed and operating conventional uranium mill. The Ute Mountain Ute Tribe, whose members live near the White Mesa site, called last year for the mill to close.

In correspondence this year with Arizona regulators, Scott Bakken, vice president for regulatory affairs at Energy Fuels, said the company was also measuring the daily volume and conducting periodic sampling of the water pumped to the surface. Mr. Bakken added that Energy Fuels would increase the frequency of pumping to mitigate any risk to groundwater if water quality standards were not met.

The Arizona Department of Environmental Quality on Thursday gave the company the green light to continue, moving to grant an aquifer protection permit to Energy Fuels. The ruling, which is the latest stamp of regulatory guidance for the project, allows the company to use engineering controls to “reduce discharge of pollutants to the greatest degree achievable,” the agency said.

But members of the Havasupai Tribe, as well as hydrologists such as Dr. Kreamer, are also expressing concern that the uranium-heavy water released by the aquifer, despite the company’s efforts to collect it, could jeopardize the supply of water to nearby Supai Village, home to Havasupai families, and springs within the Grand Canyon itself.

“They’re setting up conditions that would mobilize the contaminants,” Dr. Kreamer said.

Noting how Pinyon Plain is steadily advancing, Ms. Tilousi, of the Havasupai Tribe, said, “The domestic uranium industry is set to go into overdrive again.”

“But we’ll lie down in front of the mine’s entrance to keep it from fully functioning if we have to,” she added. “We’ll make them understand this is about much more than money.”