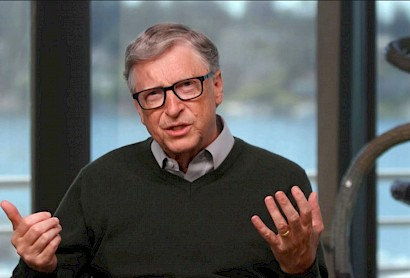 Bill Gates might be a tech billionaire — but he and his wife Melinda French Gates, who are in the process of divorcing, are also two of the largest private farmland owners in the United States.

Recent reports detailing the extent of Gates’s land ownership have prompted criticism from some environmental advocates and farmers, who say there seems to be a contradiction between his public environmental advocacy and his personal investment strategy.

Others have speculated the farmland purchases may be a part of the billionaire’s overall climate efforts. Bill Gates has said there’s no connection, either way. But the new details on the purchases — and the discussion surrounding them — serve as an important reminder that billionaires can store their massive wealth in all sorts of unexpected places, and that there can often be a tension between their personal investments and their more publicized philanthropic work.

NBC News reported that the Gateses had acquired more than 269,000 acres of farm in the United States in the past 10 years. Those purchases, made with the help of the Washington-based firm Cascade Investment and a number of shell companies, include farmland in nearly 20 states that cultivate vegetables such as carrots, soybeans, and potatoes (some of which end up in McDonald’s French fries). These details come after the agriculture outlet the Land Report reported in January that the tech billionaire and his wife were the country’s top private farmland owners in the country. An NBC News analysis also identified Gates as the largest farmland owner in the US.

Almost 300,000 acres is a lot of land for one family or private individual to own, but it’s still just a small part of the estimated 911 million acres of farmland in the US. While Gates appears to be one of the largest private farmland owners in the country, he’s far from alone in wanting to incorporate farmland into his investment strategy.

As Mother Jones recently reported, other large financial firms have sought to purchase agricultural land, too, even if they have no involvement in the day-to-day farming operations. Land Report, the outlet that named Gates the top private farm owner, notes several other families that claim well over 100,000 acres. The US Department of Agriculture estimates that about 30 percent of US farmland is rented out by owners who serve as landlords and aren’t involved in farming, like Gates.

All this is to say, it shouldn’t be surprising that Bill Gates, one of the wealthiest people in the world, makes investments to serve his own financial interests.

“It’s a good investment,” Johnathan Hladik, a farmer and the policy director for the Center on Rural Affairs. “It’s smart, it’s stable, and especially over the past couple decades, it seems to be going up.”

Still, Gates’s landownership has attracted particular attention because the billionaire has tried to make a name for himself in climate advocacy. Gates is currently promoting a book on the subject, and has positioned himself and the Gates Foundation as a leader in what the future of agriculture should look like, especially in regard to technology.

One Georgia farmer and environmental advocate, John Quarterman, told NBC that while he expected that Gates would encourage more sustainable practices after buying farmland nearby, his acquisition of that land didn’t change much. And the National Farmers Union has suggested that the growing number of non-farmer owners like Gates buying up farmland — and renting it out — could lead to practices that hurt the environment: Short-term farmers who rent land are less likely to take long-term conservation steps, the organization argues, and non-farmer owners don’t have the experience to “understand the importance of protecting natural resources.”

Others have floated the opposite idea: that Gates’s massive investment in farmland might have a direct relationship to his other climate efforts. Newsweek, for instance, recently suggested his land ownership “may be connected to his investments in climate change agricultural developments and Impossible Foods,” though it didn’t offer much support for that premise.

While Bill Gates has previously tried to separate his Gates Foundation work on the climate from his private investments, Cascade Investment has defended its record on sustainability.

In response to criticism, a spokesperson for Cascade Investment emphasized that it had enrolled all its farmland in a program by Leading Harvest, a nonprofit that releases standards for sustainability focused on biodiversity, conservation, and soil. “Cascade plans to continue to evaluate and implement new initiatives that will improve the overall sustainability of its farmland portfolio,” the spokesperson told Recode.

More broadly, Gates and other wealthy buyers of farmland have also been criticized for contributing to the concentration of land ownership. Because they can usually make higher bids than what local farmers can afford, fewer people end up owning their own farmland. As University of New Mexico professor Nick Estes wrote for the Guardian in April, this results “in a greater push for monocultures and more intensive industrial farming techniques to generate greater returns,” while Indigenous people and small farmers “are more cautious with the use of land.”

The issues at play go beyond what pieces of land Bill Gates has bought. “People tend to look either for the salvation story — he’s doing this to save the planet — or they look for the opposite — you know, it’s just another greedy landowner,” Bruce Sherrick, an agriculture professor at the University of Illinois Urbana Champaign, told Recode. Sherrick, who is on the board of Leading Harvest, says that Gates-owned farms are taking a positive step by following Leading Harvest’s standards.

Gates himself made a point to differentiate his climate advocacy and his investments. In a Reddit AMA in March, the billionaire seemed to try to separate his climate advocacy and his personal investments when asked about his wealth of land. “My investment group chose to do this. It is not connected to climate. The agriculture sector is important,” he said in the post, before adding a more general comment about deforestation and biofuels.

But whatever Gates might wish, many observers can’t quite separate the two things. For them, Bill Gates the environmentalist is also Bill Gates the commercial farmland owner, and they think the two roles are connected even if Gates doesn’t consider them to be.