What is climate change? Causes and effects of global warming 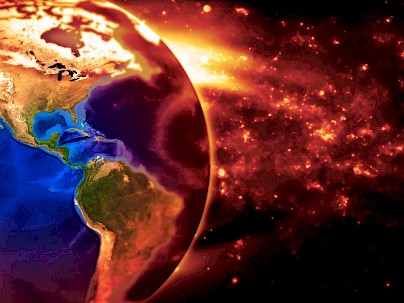 Global warming, climate change, climate crisis, climate breakdown, and climate emergency are all terms which describe a major threat to life as we know it on our planet, but what are people talking about when they use these terms?

The first important aspect to understanding the world’s climate is distinguishing “climate” from “weather”.

Weather refers only to the changeable short-term atmospheric conditions in a place or area, while climate refers to a much longer pattern of weather behaviour, and can change from season to season.

But there is also the overall climate of the Earth, which is understood through combining the long-term climate records together to build a picture of the trends affecting our planet.

While weather patterns can change over just a few hours, climates usually take hundreds, thousands or even millions of years to change.

However, since the middle of the 20th century, scientists around the world have been warning that climates all around the world, which had been stable for thousands of years, are beginning to change fast and that it is human activity which is largely causing the current changes.

Overall, the world is getting warmer – this is why the process is often known as “global warming”.

The average global temperature on Earth has increased by more than 1C (2F) since 1880. Two-thirds of that warming has occurred since just 1975, at a rate of roughly 0.15-0.20C per decade.

However the world is not uniformly getting hotter. Some areas, such as the Arctic and Antarctic are warming faster than others, and rising average temperatures can have numerous other consequences, which is why the process is better described as “climate change” or “climate breakdown”.

From a human perspective the huge array of negative impacts on us and other species mean it can be thought of as a “climate crisis” or “climate emergency”.

How is the climate changing?

The Earth’s climate is always changing, and before we examine why scientists believe humans are having such a large impact on the climate, it is important to recognise that various natural factors cause major changes to the climate.

Records show that over the last 6,000 years the Earth was on a long slow cooling trajectory, which then suddenly ended during the late Victorian period, around 150 years ago. At this time the human world had already embarked upon a global campaign of industrialisation – a process still underway.

The dawn of industrialisation ignited a planet-wide scramble to excavate exceptionally combustible, energy-rich fuels such as coal, oil and gas, to provide the power required for an endless array of processes including manufacturing, transport, heating and cooling buildings, and domestic use.

This fossil fuel extraction boom is still underway. Though many countries are increasingly switching to renewable energy sources, in 2020, fossil fuels still accounted for 84 per cent of global energy generation, and around the world companies are still planning to keep extracting them.

When fossil fuels are burnt, they emit gases which act to trap the Sun’s heat within the atmosphere, thereby heating up the planet like a greenhouse. This is why they are known as greenhouse gases.

As the process of industrialisation altered societies and produced breakthroughs, particularly in medicine and agriculture, populations of humans have risen sharply around the world.

As well as growing populations demanding greater energy resources – particularly in the richest societies – more people also require more food. As a result, agriculture has had an increasing effect on land use and greenhouse gas emissions – particularly for meat production.

The key greenhouse gases are:

Carbon dioxide accounts for about 80 per cent of all greenhouse gases in the atmosphere, but methane, which makes up about 10 per cent, is much more powerful, though over a shorter amount of time.

Nitrous oxide accounts for about 7 per cent, and the fluorinated gases, which are synthetic and very powerful greenhouse gases emitted from a variety of industrial processes, make up the remaining 3 per cent.

Impacts of the climate crisis

A warming world has terrifying consequences. We are already witnessing many of the impacts of climate change, in the form of extreme weather events and an increasing rate of sea level rise, but if the current rate of warming continues, then the worst is still yet to come.

Responding to the multifarious threats posed by the climate crisis is set to be one of our species’ biggest challenges to date.

This is because for many societies, a successful response will involve major recalibrations to people’s fundamental values and expectations, as well as deep changes to the systems and institutions our societies have built themselves on over the last century or more.

But if we are unequal to this recalibration the terrible repercussions will intensify and loom ahead of us like an increasingly sinister spectre.

The one key thing humans must do to slow down our journey into fiery doom is stop producing emissions of greenhouse gases.

The other key thing we must do is repair the damage we have done to the natural world – this will draw the pollutants out of the atmosphere and help slow down the heating process.

Governments around the world are currently only taking small steps to reduce certain emissions and protect and restore a few select ecosystems. These are glimmers of recognition of the problem, but much more needs to be done.