What is a heat dome? Deadly hot weather descends on Pacific Northwest 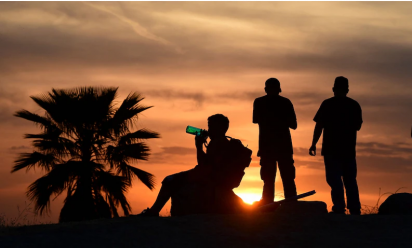 This Monday could be the hottest day on record in Portland, Oregon, as 13 million people across the Pacific Northwest brace for record heat.

“We’re taking this very seriously as a public health emergency because of the prolonged nature of it,” says Dan Douthit, the public information officer for the Portland Bureau of Emergency Management.

Portland isn’t a stranger to hot summers that push temperatures into the upper 90s and occasionally break 100 degrees Fahrenheit, says Douthit, but sustained triple digits is rare for the city, where heat could reach 110°F this weekend and into next week. 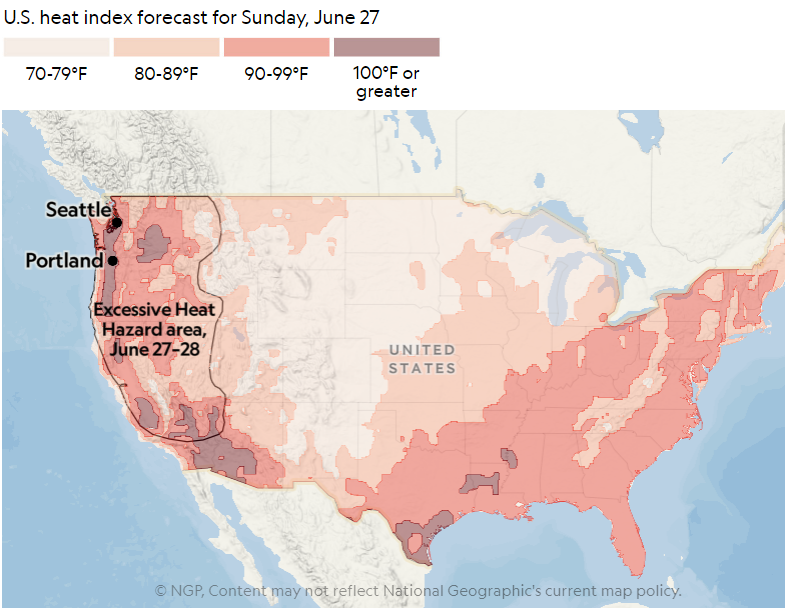 Oregon’s largest city, along with Seattle, 175 miles to the north, and Spokane, near the Washington-Idaho border, are all expected to feel historic heat in the coming days as a “heat dome” smothers the region.

“As a city we’re actively concerned about [climate change],” says Douthit. In addition to heat, he says they also face climate change in the form of wildfires, which last year briefly made Portland the city with the world’s worst air quality.

What is a heat dome?

A heat dome is effectively what it sounds like—an area of high pressure that parks over a region like a lid on a pot, trapping heat. Research from the National Oceanic and Atmospheric Administration (NOAA) shows they are more likely to form during La Niña years like 2021, when waters are cool in the eastern Pacific and warm in the western Pacific. That temperature difference creates winds that blow dense, tropical, western air eastward. Eventually that warm air gets trapped in the jet stream—a current of air spinning counterclockwise around the globe—and ends up on the U.S. West Coast.

“When you get high pressure over the West, it keeps that warm air over the West,” says Andrea Bair, the climate services program manager for the National Weather Service’s western region.

“A heat dome is basically that trapping dome. The heat event itself is the heat wave, lasting several consecutive days and nights that are well above normal,” she notes, adding that the heat dome helps sustain the heat wave.

Bair says it’s common for areas of high pressure to sit over the West during both winter and summer months, but “It is unusual to have heat events this early.”

“It’s the same high-pressure pattern we’ve had parked over the West; it just kind of moves north and south or east and west. It moves and strengthens and weakens,” says Bair.

This heat wave over the Northwest is expected to taper off by late next week, but, “then as we get toward the Fourth of July, right now models are indicating another spell of heat wave,” says Bair.

What does climate change have to do with it?

The science is clear about how climate change will influence hot weather: It will make heat more extreme and extreme heat more likely. Since the late 19th century, average U.S. temperatures have increased, according to the 2017 National Climate Assessment. Since the 1960s, heat waves have become more common, and by mid-century, scientists expect 20 to 30 more days of temperatures over 90°F in the U.S. By 2050, cities in the Northern Hemisphere will experience climates similar to today’s temperatures in cities more than 620 miles south.

The U.S. isn’t the only region coping with extreme heat. In Russia, cities as far north as the Arctic circle broke heat records this week.

In the Pacific Northwest, the warming effect of burning greenhouse gases is expected to warm the region as much as 5.8°F, on average, by mid-century.

“You shift your extremely hot days by a huge amount. They were rare to begin with, but you raise temperatures by a couple degrees, and all the sudden, you open up new territory,” says Daniel Swain, a climate scientist at the University of California, Los Angeles.

Bair notes it’s challenging to link any one specific weather event with climate change, but says over time the trend is showing longer-lasting, more intense heat.

“When it comes to extreme heat, it’s one of the easiest types of extreme weather events to draw that link to,” says Swain.

When drought and heat waves occur at the same time, it can create a feedback loop in which both weather patterns are made worse. Moisture in soil can mitigate the impact of heat, like sweat cooling a body, but with bone dry soil in much of the West, that heat simply warms the atmosphere.

“You have this further self-reinforcing cycle between heat waves and droughts that are being made worse by climate change on top of the linear warming trend,” says Swain.

He expects to see more extreme heat waves in the future. Even a half a degree of global warming “substantially increases the odds for extreme heat events in this region and more generally,” he says.

More extreme heat waves are likely to continue, even if the world drastically reduces its planet warming emissions. And that has repercussions for health. A study published in the journal Nature Climate Change last May attributed 37 percent of all heat-related deaths between 1991 and 2018 to climate change.

“My hope is that we only have a few more decades of increasing risk of these extremes—but that’s only if we get our act together,” says Swain.

How are people coping?

The current heat wave arrives as much of the West is still caught in a historic drought.

“Soil moisture is already largely depleted in the Northwest… Therefore, this new round of heat could be a “death knell” for rangelands and dryland crops that have been just hanging on,” writes Brad Rippey, a meteorologist with the U.S. Department of Agriculture’s Office of the Chief Economist, in an email.

Also, by further drying out vegetation, the heat wave could elevate the wildfire risk in the West. Last year, hundreds of homes were lost to wildfire in the Pacific Northwest. “Any time vegetation is becoming quite dry that’s one piece of the fire equation. That increases the likelihood and size of fire,” says Erica Fleishman, an ecologist at Oregon State University.

In the immediate future, local officials are working to mitigate the threat to human health. The very young and very old, pregnant women , and those with chronic illness are most at risk of succumbing to heat exhaustion or heat stroke.

“This is an unprecedented event,” says Kate Hutton, a representative from Seattle’s Office of Emergency Management. “We might see impacts to the power system and heat-related illness.”

She says Seattle has designated cooling centers, like public libraries and community centers, where residents can access air conditioning. In this region, many residents lack air conditioning;  Seattle is centered in a historically cool region. The city has only seen three 100°F days. Since record-keeping began.

In Portland, city officials are working with the county and local non-profits to open three air-conditioned cooling centers over the weekend, and plans to open more facilities if needed.

Douthit says Portland residents can call 211 for more information and transportation assistance. “We’re encouraging people, if you have a neighbor who’s alone, to check on them,” he says. “We just want everyone that might be isolated to know they have places to go.”