The EU’s plans to become climate-neutral by mid-century add further fuel to the heated debate about the environmental impacts of incinerating waste to generate power. The sector provides a small but significant share of the EU’s total energy supply, with Germany being the largest user. This factsheet provides an overview of the sector and complements the article “EU climate ambitions spell trouble for electricity from burning waste”.

Waste-to-energy plants use household garbage as a fuel for generating power, much like other power stations that use coal, oil, or natural gas. The burning of the waste heats water and the steam drives a turbine to generate electricity. A more in-depth explanation of the process can be found here. 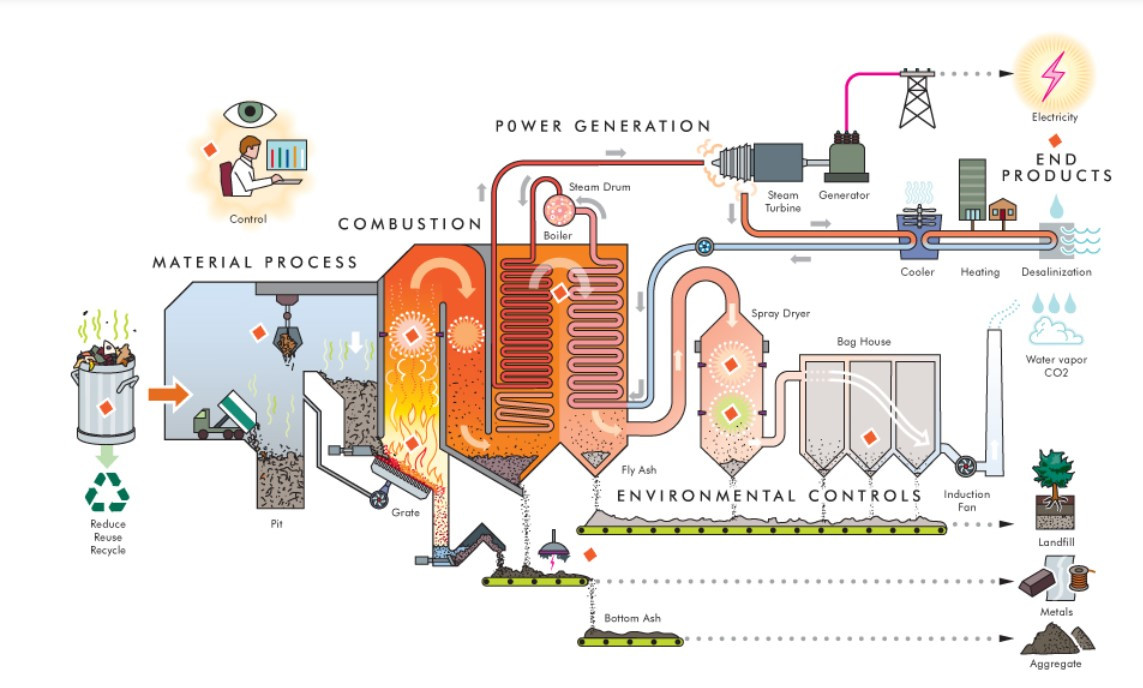 Waste-to-Energy: How It Works. Source: Deltaway.

Waste material is received in an enclosed receiving area, where it is thoroughly mixed in preparation for combustion.

Mixed waste enters the combustion chamber on a timed moving grate, which turns it over repeatedly to keep it exposed and burning.

Fine airborne particulates (fly ash) are removed in the filter baghouse. The acidic combustion gasses are neutralized with an injection of lime or sodium hydroxide.

The unburned remains of combustion —”bottom ash”— are passed by magnets and eddy current separators to remove both ferrous (steel and iron) and other metals, such as copper, brass, nickel, and aluminum, for recycling. The remaining ash can be used as aggregate for roadbeds and rail embankments.

Superheated steam powers the steam turbine generator. The cooling steam is cycled back into water through the condenser or diverted as a heat source for buildings or industry. The cooled stream is reheated in the economizer and superheater to complete the steam cycle.

Activated carbon (charcoal treated with oxygen to increase its porosity) is injected into the hot gases to absorb and remove heavy metals, such as mercury and cadmium. Nitrogen oxide in the rising burn gases is neutralized by the injection of ammonia or urea. Dioxins and furans are destroyed by exposing flue gases to very high temperatures.

Energy generation from waste in the EU and Germany

MSW, also called household waste, accounts for only about 10% of total waste generated. This is waste collected by municipal authorities and disposed of through waste management systems. MSW is mainly generated by households, although it also includes similar waste from offices, shops, and public administrations. The average European is responsible for 500 kg of MSW a year.

In Germany, neither ITAD, the lobby of German incineration companies, nor UBA refers to WtE facilities as such but rather as Abfallverbrennungsanlage or thermische Abfallbehandlung, namely, waste incineration plants or thermal waste treatment. They see the technology as primarily important for purposes of waste management and not energy production.

There is currently a flurry of activity in the EU around the circular economy. The continent’s ambitious recycling plans mean that most power production from waste could eventually run out of fuel and become obsolete.

The Waste Framework Directive, responsible for the “waste hierarchy”, requires that, as of 2020, EU households must recycle or prepare for re-use 50% by weight of waste materials, such as paper, metal, plastic, and glass. And by 2025, the recycling and preparing for re-use of municipal waste shall be increased to a minimum of 55%, 60%, and 65% by weight by 2025, 2030, and 2035 respectively. 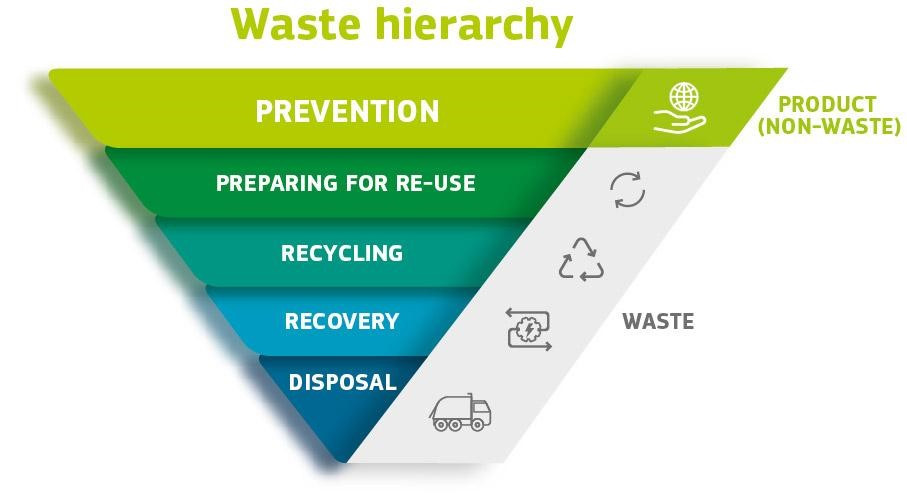 The European Commission’s new Circular Economy Action Plan (CEAP) aims to halve residual waste by 2030. The European Parliament’s report on CEAP calls for minimizing waste incineration and calls on the Commission to define an EU-wide approach for the management of non-recyclable residual municipal waste that ensures its optimal treatment. It warns about building an overcapacity of waste incineration that could hamper the development of the circular economy.

The Single Use Plastics Directive will, among other things, require that plastic-using companies include 25% of recycled PET (a clear, lightweight plastic that is widely used for packaging foods and beverages) in new PET bottles. This requirement, which is already fulfilled in some countries such as Germany and Denmark, will make recycled PET much more valuable and thus dramatically boost its percentage of the recovery. It means that WtE plants will receive much less plastic which, in light of its composition – 99% of plastic is made from chemicals sourced from fossil fuels – has a combustion gradient nearly as high as fossil fuels.

All texts created by the Clean Energy Wire are available under a “Creative Commons Attribution 4.0 International Licence (CC BY 4.0)”. They can be copied, shared, and made publicly accessible by users so long as they give appropriate credit, provide a link to the license, and indicate if changes were made.