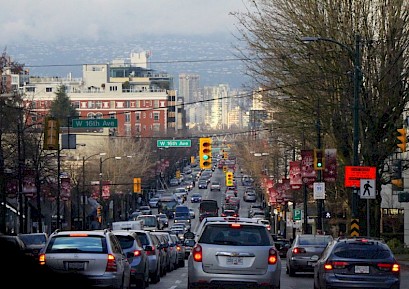 In the months leading up to the pandemic, Adam Vajda, 29, and Daniel Vickers, 30, had similar morning routines.

After several clicks of the snooze button, they woke up and spent 15 minutes eating and drinking coffee before rushing out the door to their jobs in downtown Vancouver. When it came to their commutes, however, the similarities ended.

Vajda, who lives in Vancouver, could zip to work on his bike in 15 minutes, whereas Vickers, who lived in North Delta at the time, bashed his way through morning rush hour for 80 minutes to reach the city.

Vickers’ daily battle with traffic is not unusual and, if nothing changes, is set to worsen. By 2040, a whopping one million more people are projected to move to Metro Vancouver, with an expected increase of 600,000 vehicles on the roads. There is more than just stress associated with congestion: as Canada’s National Observer has reported, air pollution from fossil fuels is linked to one in five deaths worldwide. Given these health statistics and our growing awareness of the need to cut carbon emissions, is it possible the concept of mobility pricing may finally gain traction?

Mobility pricing refers to charging vehicles for road usage, using methods such as a distance-based charge or a point charge (more widely known as a toll). The idea has been pinballing around municipalities in the Lower Mainland for some years now as a way to shift people out of their cars and onto transit.

In November, Vancouver city council greenlit a $1.5-million study into mobility pricing as part of the new Climate Emergency Action Plan approved by council in late 2020.

The plan originally included a recommendation to introduce mobility pricing within a cordoned area in the downtown core by 2025. Council watered down that option, instead asking staff to study the matter and report back in 2022.

“We hadn’t yet done any of the analysis and research that gives council adequate data to make an informed decision,” says Coun. Rebecca Bligh, who requested the amendment. The remaining councillors, including Christine Boyle, agreed.

“In that report, mobility pricing was outlined as a game-changing move that would be required to meet the emissions target that council had identified, but it didn’t have all the details,” says Boyle. Since then, council has gone a step further by issuing a request for proposals for a feasibility study into tolls for vehicles entering the city’s core.

A tough sell for Vancouverites

Given its traffic woes, Vancouver might well be a prime candidate for mobility pricing. An annual traffic study in 2020 ranked Vancouver the worst city in Canada when it comes to congestion, and of the 416 urban areas researched globally, Vancouver placed 40th.

Driving down emissions from transportation, which comprise more than a third of the province’s total, is a crucial plank in B.C.’s overall climate targets.

B.C. aims to bring down greenhouse gas emissions to 80 per cent below 2007 levels by 2050. The province’s efforts include a provincial carbon tax, tighter fuel standards, and building codes requiring all buildings to be “net-zero ready” by 2032.

Much of the focus of efforts to decrease transportation sector emissions will be based on upping electric vehicle numbers. The province is requiring auto manufacturers to gradually increase the percentage of new light-duty zero-emission vehicle sales and leases, until it reaches 100 per cent by 2040. Electric vehicles can help solve emission problems, but they don’t do a thing to reduce congestion.

Yet the idea of charging private vehicles for road usage has been anathema to North Americans; to date, no urban centre has actually pulled the trigger on anything more extensive than bridge and road tolls.

Worldwide, the conversation dates back well over 20 years. Several cities around the world have already adopted mobility pricing: Singapore in 1998, London in 2003 and Stockholm in 2007. Vancouver has been mulling it for some time as well; the regional transportation authority, TransLink commissioned a mobility-pricing study in 2018. The results of that study highlighted the benefits for Metro Vancouver: increased travel time reliability, reduced traffic and a potential reduction in transit fees, among others.

Nonetheless, it failed to gain traction among municipal leaders. Mobility pricing is politically unpopular and difficult to impose. But as new information surfaced, the need to reduce congestion became more urgent.

Allan Seckel, then chairman of TransLink’s independent commission, says: “I think the City of Vancouver is considering issues that we didn’t consider; climate change wasn’t as central a factor in our consideration as other issues were.”

The UN’s Special Report on Global Warming, which formed the basis of Vancouver’s climate plan, was released in August 2018, two months after the TransLink study wrapped up.

“Mobility pricing is just one of those tools in the toolbox, and I think we need to use every tool we can to reduce greenhouse gas emissions,” says Green Party Coun. Adriane Carr.

Paradoxically, it’s the shift towards electric — albeit private — vehicles that perhaps exerts the greatest pressure on politicians to pass mobility-pricing policies in the near future. Fuel tax funds a large portion of public transit, and as an increasing number of citizens switch their combustion cars to electric, that revenue starts to dwindle. Mobility pricing could provide an alternate revenue stream.

“At some point, there may be an intersection between the reasonable need to fund transit overall, including roadways, and reduce congestion in the area,” says Seckel.

With a 700 per cent increase in electric vehicles over the last 10 years, that convergence point is steadily approaching. And while policymakers want to continue to incentivize electric vehicles, they may not be exempt from a possible mobility price, according to Boyle.

“Fossil-fuelled combustion engines are one portion of the problem, but just switching our whole transportation system from gas to electric vehicles won’t solve all of the problems,” explains Boyle. “Largely because the other problem is land use and road space.

“And then there’s an equity problem,” continues Boyle. “Because right now, electric vehicles cost more than other vehicles.”

The question of equity was central to TransLink’s 2018 report and continues to be a hurdle in the ongoing study. “It matters that mobility pricing is done in an equitable way,” says Boyle. “Because the way our cities have developed has pushed lower-income people further away from the city core, and meant that more lower-income people are reliant on private vehicles to get to where they need to go.” Which is, in part, why some suggest bringing mobility pricing on stream in 2025, the same year the Broadway subway line is scheduled for completion. “We need to be expanding alternative transportation options at the same time we’re moving on mobility pricing.”

Proponents point out that in order to be done fairly, mobility pricing must be regional because some of the heaviest traffic is around bridges and municipal boundaries.

Commuters Vickers and Vajda have both experienced the downsides of cross-municipal travel. For someone like Vickers, who was born and raised in North Delta, public transit wasn’t always an appealing option because it was difficult to access.

“Not everyone lives near a SkyTrain station,” he says. Taking a bus to a station, Vickers explains, would have added significantly to his lengthy commute, and biking that distance simply wasn’t a feasible option. Five months ago, Vickers moved to Kitsilano in order to reduce his commute time. And although Vajda was considering moving back to his hometown of North Vancouver, where housing would be marginally more affordable, he and his girlfriend were reluctant to deal with congestion from the Lions Gate Bridge.

Boyle concurs that a regional approach would be effective and says there is a concurrent, ongoing conversation between city staff and the region. “Transportation experts agree that this is a policy tool that’s needed to address congestion, reduce emissions and improve access to public and active transportation. There’s broad agreement,” she says.

But to Boyle, waiting for regional consensus is a bit of a “chicken-or-egg” situation.

“The region is nervous about implementing mobility pricing, so the Vancouver conversation is, ‘Well, do we wait until the whole region is ready, or do we pilot a program here and have that move the regional conversation forward?’”

How COVID-19 will impact the future of transportation also remains to be seen. Congestion has been reduced since the beginning of the pandemic due to stay-at-home orders; Vajda has been working from home since March 2020, and Vickers only commutes a couple of times a week.

However, once COVID comes to an end, there will probably be a shift back to offices, Dominato said.

The year 2022 has particular relevance in the conversation around mobility pricing because that’s when the next municipal elections will be held, and taxation policies are notoriously polarizing. Vickers himself opposes the idea of a mobility price, saying he’s concerned it will disincentivize people from utilizing the downtown core and worries the fee will only affect those in a lower-income bracket.

Leaders like Carr believe the political risk is worthwhile, not just in terms of mobility pricing’s immediate projected benefits, but because it could serve as a catalyst to other transformational policies that decrease our dependence on fossil fuels.

The more it costs to drive, the more people will turn to cycling, walking and transit to get around, options we know better human and environmental health. Nonetheless, the leap to mobility pricing will not be easy even in Vancouver, which aspires to be the greenest city in the world. When decision time finally comes, Vajda, who owns a vehicle for pleasure use, will be among the proponents. “I think at this stage in my life, I would be on board for mobility pricing. I think it’s a great idea.”