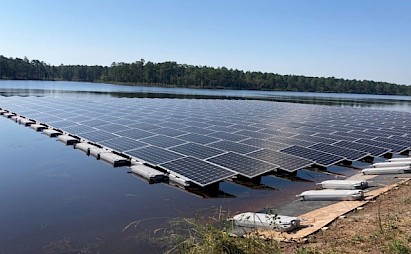 It’s back to nature for the US Department of Defense. The US Army is stepping up its renewable energy activity with its first ever floating solar array, which could be a model for more to come. Meanwhile, the Navy and Marine Corps just pushed out a new climate action plan that emphasizes something called “nature-based solutions.” What’s next, wind-powered warships?

Floating Solar For The US Army

CleanTechnica first caught wind of the Army’s floating solar project back in 2020. The Department of Defense had been playing its renewable energy initiatives rather close to the vest during the Trump administration, but as the 2020 election cycle drew to a close it dropped word of plans to build a new 1.1 megawatt PV array, to be floated atop Big Muddy Lake at the Camp Mackall training grounds in Fort Bragg, in North Carolina.

“The new floating solar panels are an attention-getter because Fort Bragg happens to be the biggest military facility in the world,” we observed. The current roster includes 49,000 military personnel along with 11,000 civilian employees and 23,000 family members.

Aside from being the Defense Department’s first foray into the floating solar field, the new solar power plant is also significant because it is the biggest solar installation of its kind in the US southeast, a region in which some states lag far behind on renewable energy development.

If the Big Muddy Lake array performs as anticipated it could set the stage for more to come across the region, and we’re about to find out. Last week the US Army announced completion of the new power plant, which comes with a 2-megawatt battery-type energy storage system.

Piling On The Resiliency

On the topic of backup power, another interesting thing about this installation is a resiliency add-on in the form of an electronic recloser, which is a sort of amped-up version of a circuit breaker.

“Reclosers respond to transient events, like a tree limb brushing against a power line, to quickly reset the system and restore power,” the Army explains. “This technology provides better protection for system power lines and minimizes damage to sensitive electronic equipment in the event of power interruption.”

So, here’s where things get interesting. The US Department of Defense helped to push the early-adopter market for utility-scale solar power during the Obama administration. Now that the market is maturing, land use issues have been bubbling up as farmland, forest, and other lands give way to ranks of solar powers.

One might think that the Department of Defense is insulated from such controversies, but one would be mistaken. The agency has installed plenty of solar panels on land, but it can’t just put them up willy-nilly. In addition, DOD has been engaged in land use battles of its own for years, because human populations are continually encroaching on its vast training grounds.

One part of the agency’s land preservation strategy is to catalogue native flora and fauna on its grounds, to establish them as habitat-protected areas. That may seem somewhat counterintuitive for exercises that involve blowing things up, but apparently there is still plenty of room to make the case for preserving natural habitats on Department of Defense grounds.

Fort Bragg is one such example. Back in 2018, our friends over at the Fayetteville Observer catalogued some of the rare species found at Fort Bragg including the red-cockaded woodpecker, the discovery of which in 1988 forced Camp Mackall to cut back its training operations for a time until they could work out a coexistence plan.

“Thousands of acres of woodpecker habitat around post have since been protected through public-private partnerships and, in recent years, officials have said the population of red-cockaded woodpeckers has more than doubled compared with the late 1990s,” the Observer reported.

Floating solar fits neatly into this slot because it provides the DOD with new opportunities for locating new solar arrays at its facilities without encroaching on natural habitats.

That brings us to the US Navy and Marine Corps, which is also relying on nature for an assist with its new Climate Action 2030 plan. In addition to a healthy dose of renewable energy and energy efficiency investments, the plan includes natural carbon sequestration and ecosystem restoration measures.

“Building on Executive Order 14072, Strengthening the Nation’s Forests, Communities and Local Economies, the DON will draw down an additional five million metric tons of CO2e per year through nature-based solutions by 2027, roughly the same as removing one million cars off the road, on DON-managed lands or working with partners,” DON explains.

DON already has a head start through its Climate Change Planning Handbook: Installation Adaptation and Resilience guidelines, which outline wetlands and coastal ecosystem protection as well as regenerative land management. As with regenerative agriculture, that refers to practices that conserve and build soil, and contribute to healthier soil. Some aspects of the field are impressively simple and they save money, too.

One example cite by DON is Naval Air Station Patuxent River, which cut back on mowing and allowed much of the base to reforest.  As described in Climate Action 2030, the based has saved more than $400,000 annually on maintenance while saving on emissions from mowing equipment. Sequestering carbon dioxide, improving species habitat, reducing excess stormwater runoff, and improving the quality of life for humans at the facility are among the other benefits.

As for wind-powered warships, maybe. During the Obama administration, the Navy pitched a low-emission Green Fleet with a heavy emphasis on biofuels and nuclear energy. Wind power was also beginning to bubble up back then, but it did not make an appearance in the Green Fleet.

More recently, new wind-based maritime technology has begun sprouting up in the form of rigid sails, kite-like sails, and rotor-type wind-powered devices that don’t look anything like sails.

So far, much of the activity has centered on the cargo ship area, so it’s possible that the commotion has crossed the Navy’s radar. If you have any thoughts about that, drop us a note in the comment thread.