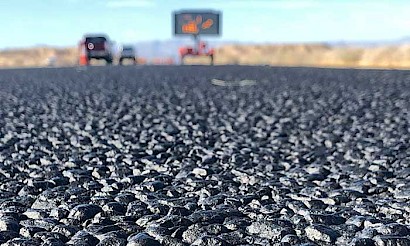 Rubberized asphalt has been around for a long time, and its supporters have a long list of arguments for its use. However, according to a new study on the effects of UV light on rubber modified bitumen, rubberized asphalt can protect road surfaces from UV aging.

The influence of UV light on the chemo-mechanical properties of pure and modified bitumen with varied amounts of crumb rubber is investigated in this study, and the results are compared to those of thermal aging.

Samples were aged for 869 hours at 0.89 Wm-2 in the Q-Lab weatherometer, which is similar to one year of UV radiation energy in Melbourne, Australia in 2019.

The changes in chemical bonding before and after aging were studied using Fourier transformation infrared (FTIR) spectroscopy. Thermal ageing causes the formation of carbonyl and sulfoxide oxides while evaporating the volatile components, as seen by the lowering of the aliphaticity index value.

UV ageing, on the other hand, is mainly targeted on components with bond energy less than 413 kJ/mol, such as C–C, C–O, and C–H, which are typically consist of aliphatic hydrocarbon chains. The upward shift of the master curves in the rheological tests demonstrated that both heat and UV ageing produce stiffer materials. However, when the concentration of CR rises, this shift reduces.

All unaged samples were found to be considerably below the Glover-Rowe onset damage envelopeonset damage’ threshold, while crumb rubber modified bitumen was nearly 60 kPa away. Furthermore, if neat bitumen is modified with 22.5 percent CR, UV and thermal ageing damage is reduced by roughly 50%, resulting in improved resistance to thermal and solar radiation degradation.