EPA began collecting and reporting data on the generation and disposition of waste in the United States more than 35 years ago. The Agency uses this information to measure the success of materials management programs across the country and to characterize the national waste stream. These Facts and Figures are current through the calendar year 2018.

EPA refers to trash, or MSW, as various items consumers throw away after they are used. These items include bottles and corrugated boxes, food, grass clippings, sofas, computers, tires, and refrigerators. However, MSW does not include everything that may be landfilled at the local level,  such as construction and demolition (C&D) debris, municipal wastewater sludge, and other non-hazardous industrial wastes. While the analysis in Facts and Figures focuses primarily on MSW, EPA has been including estimates of C&D generation and management as a separate non-hazardous waste stream in recent years.

EPA is now in the process of reviewing the waste hierarchy to determine if potential changes should be made based on the latest available data and information. More Information: 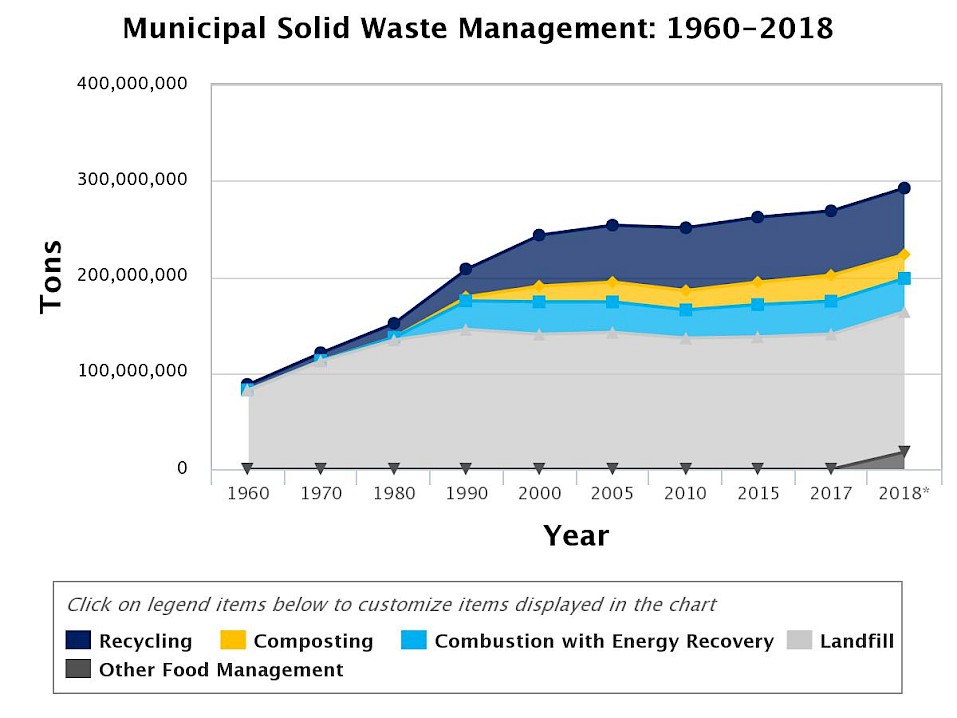 Management of MSW continues to be a high priority for state and local governments. This includes the source reduction of wastes before they enter the waste stream and the recovery of generated waste for recycling, composting or other methods. It also includes environmentally sound waste management through combustion with energy recovery and conversion, as well as landfilling practices that meet current standards or newly emerging waste conversion technologies. 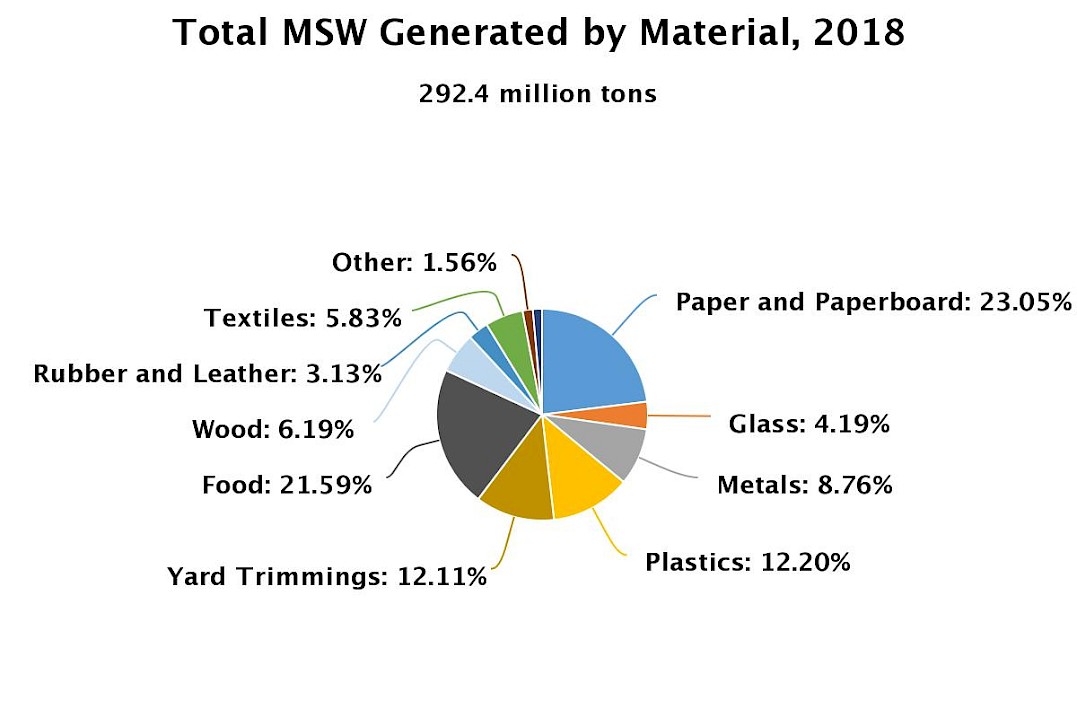 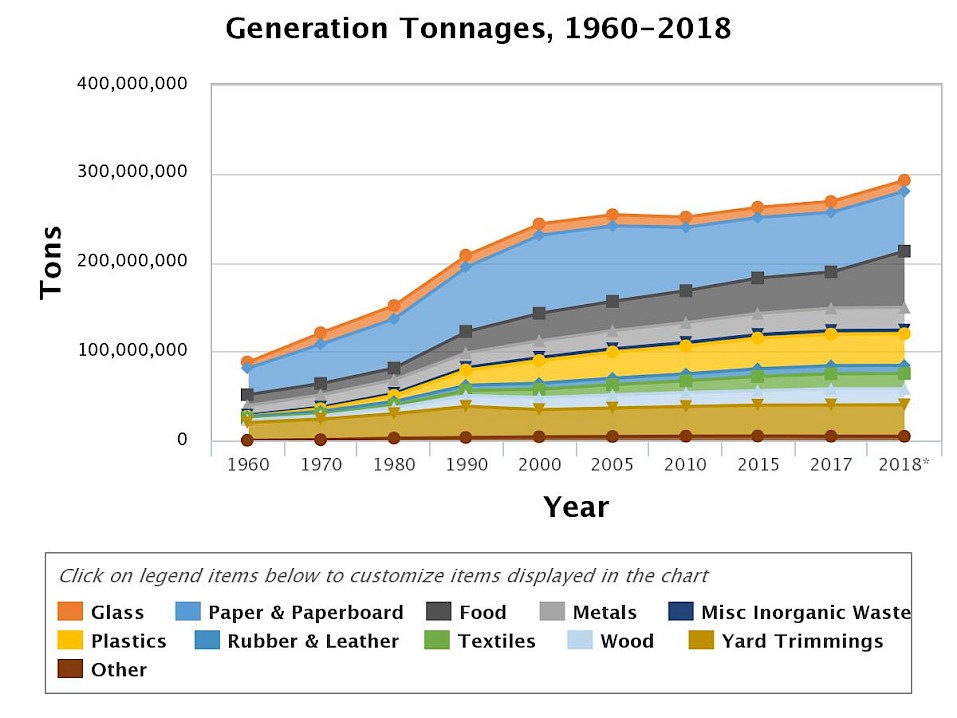 The total MSW recycled was more than 69 million tons, with paper and paperboard accounting for approximately 67 percent of that amount. Metals comprised about 13 percent, while glass, plastic, and wood made up between 4 and 5 percent. 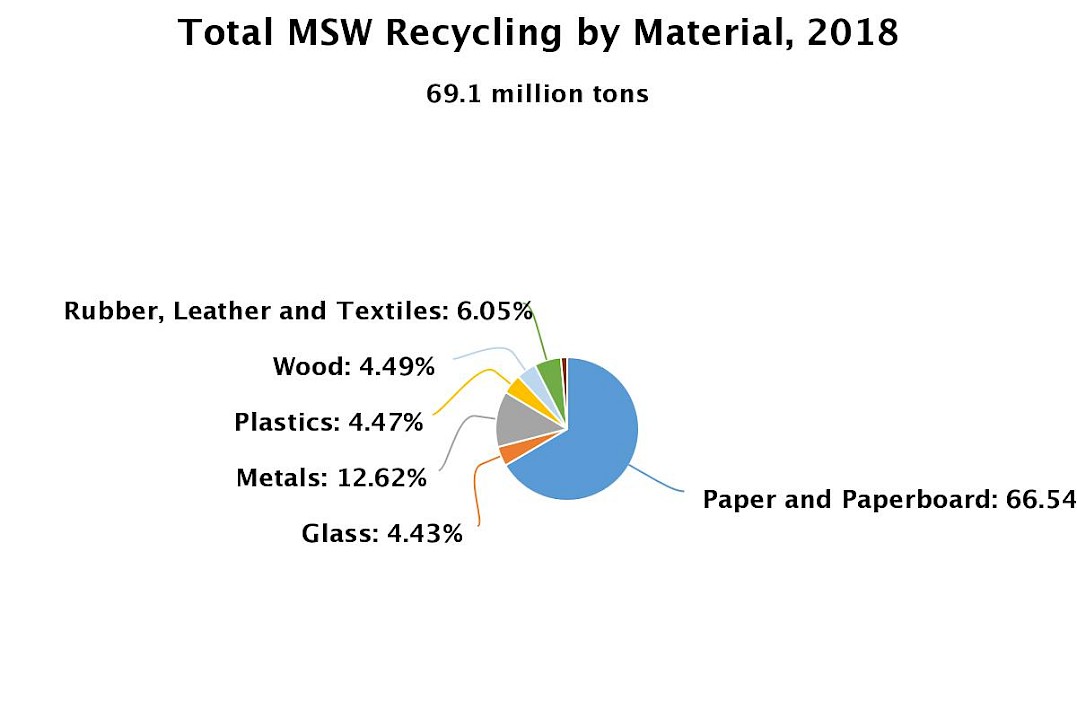 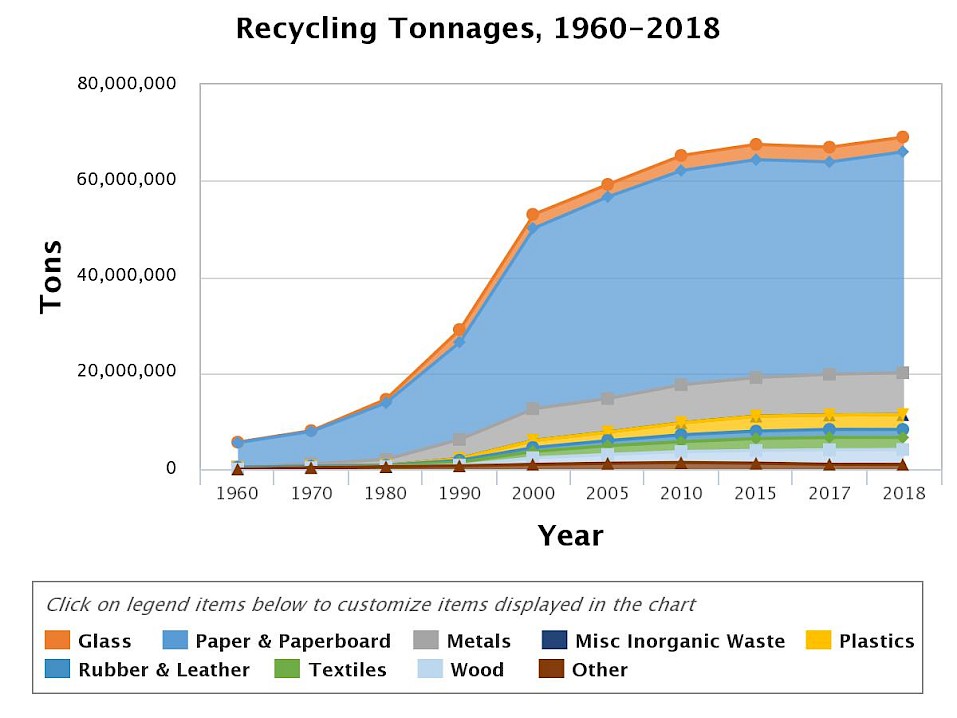 Check out our Reduce, Reuse, Recycle web area for more information on recycling.

The total MSW composted was 25 million tons. This included approximately 22.3 million tons of yard trimmings (more than a five-fold increase since 1990) and 2.6 million tons of food waste (4.1 percent of the generation of wasted food).

Other methods of food management were estimated for the first time in 2018. In 2018, 17.7 million tons of food (28.1 percent of generation of wasted food) was managed through animal feed, co-digestion/anaerobic digestion, bio-based materials/biochemical processing, donation, land application, and sewer/wastewater treatment. 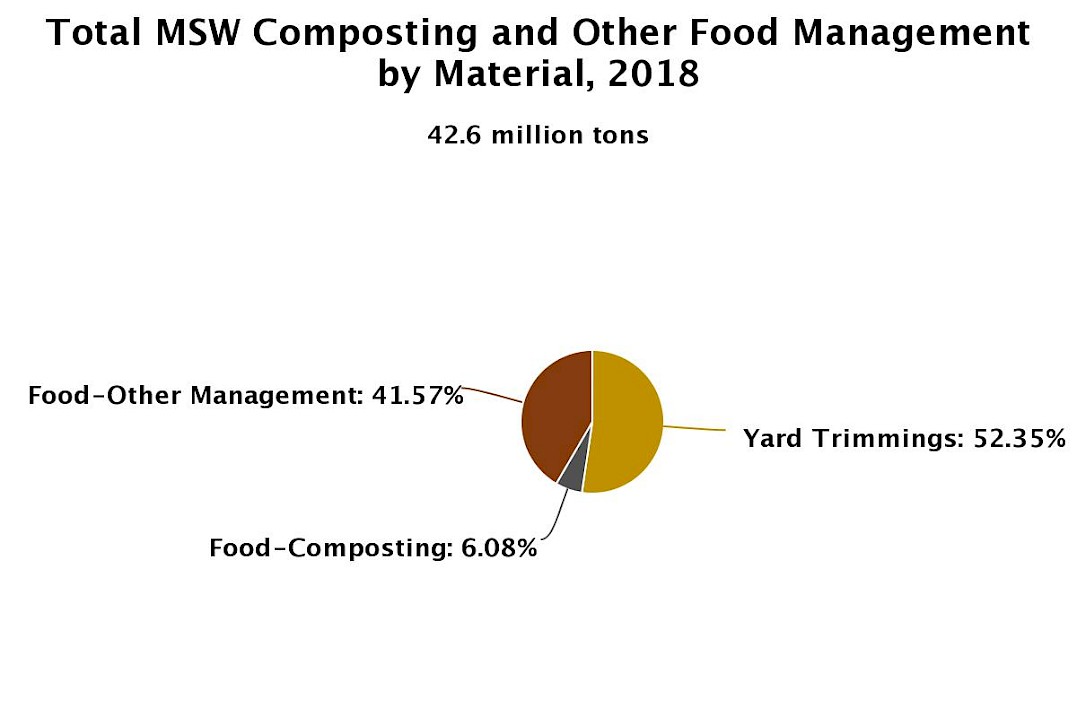 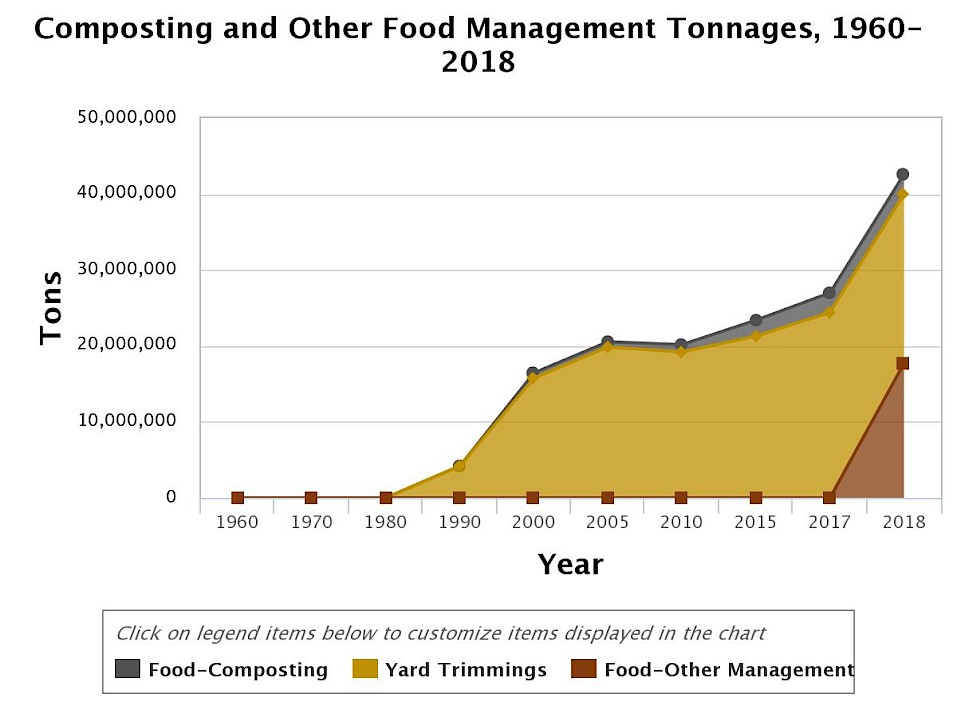 Check out our Energy Recovery from the Combustion of Municipal Solid Waste (MSW) page for more information.

In 2018, 34.6 million tons of MSW were combusted with energy recovery. Food made up the largest component of MSW combusted at approximately 22 percent. Rubber, leather, and textiles accounted for over 16 percent of MSW combustion. Plastics comprised about 16 percent, and paper and paperboard made up about 12 percent. The other materials accounted for less than 10 percent each. 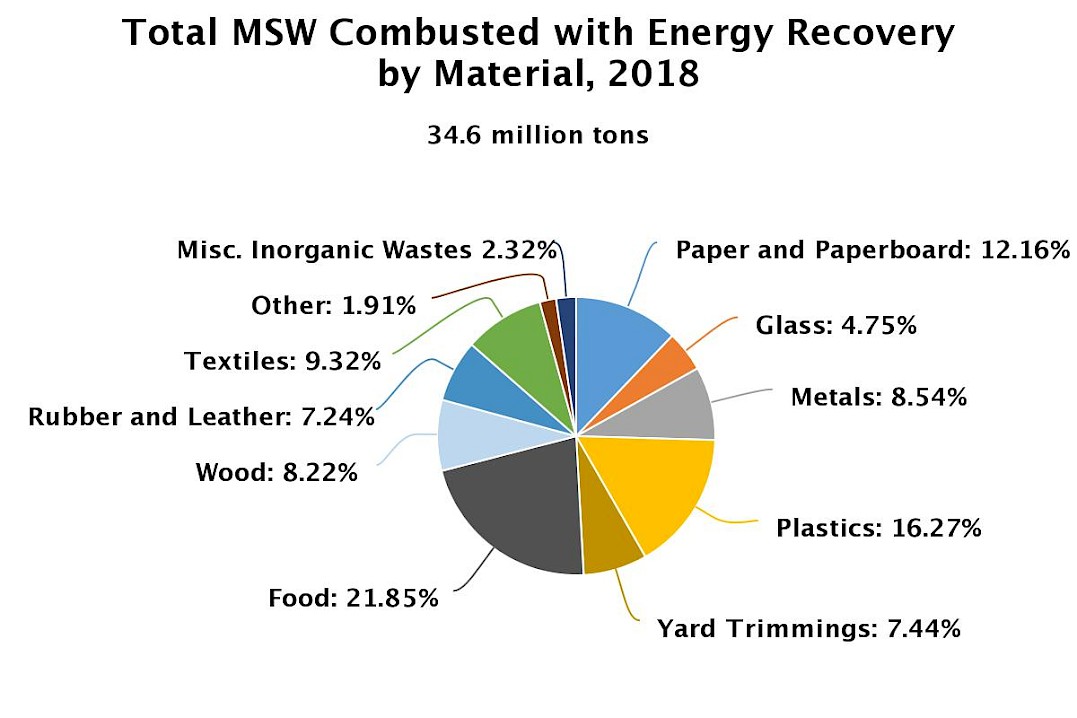 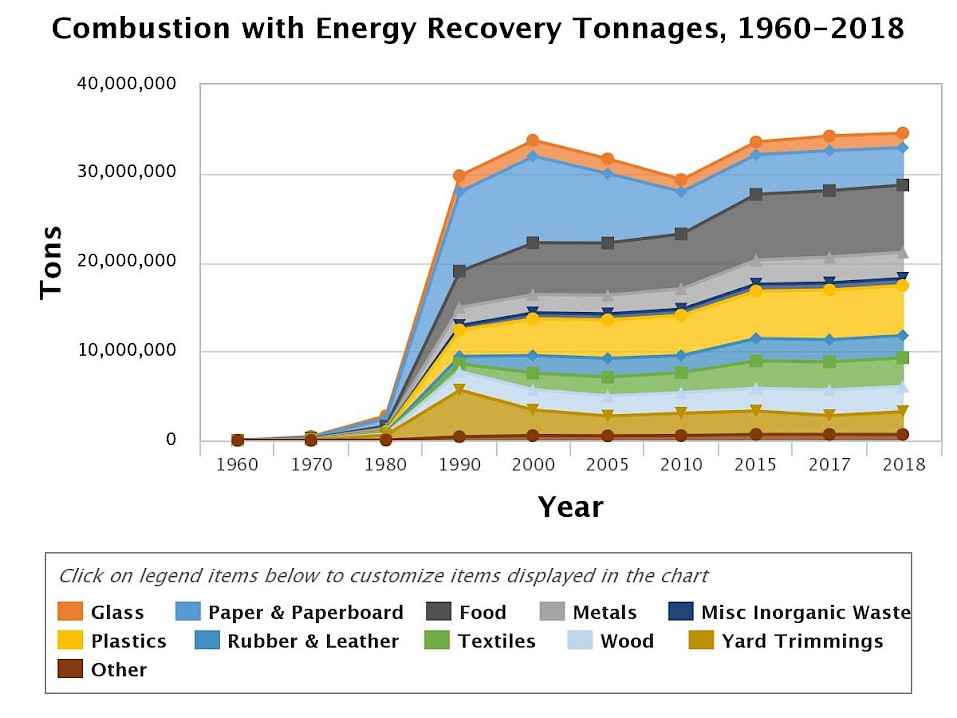 Check out our Municipal Solid Waste Landfills page for more information, and visit our Landfills web area for information on other landfills.

In 2018, about 146.1 million tons of MSW were landfilled. Food was the largest component at about 24 percent. Plastics accounted for over 18 percent, paper and paperboard made up about 12 percent, and rubber, leather, and textiles comprised over 11 percent. Other materials accounted for less than 10 percent each. 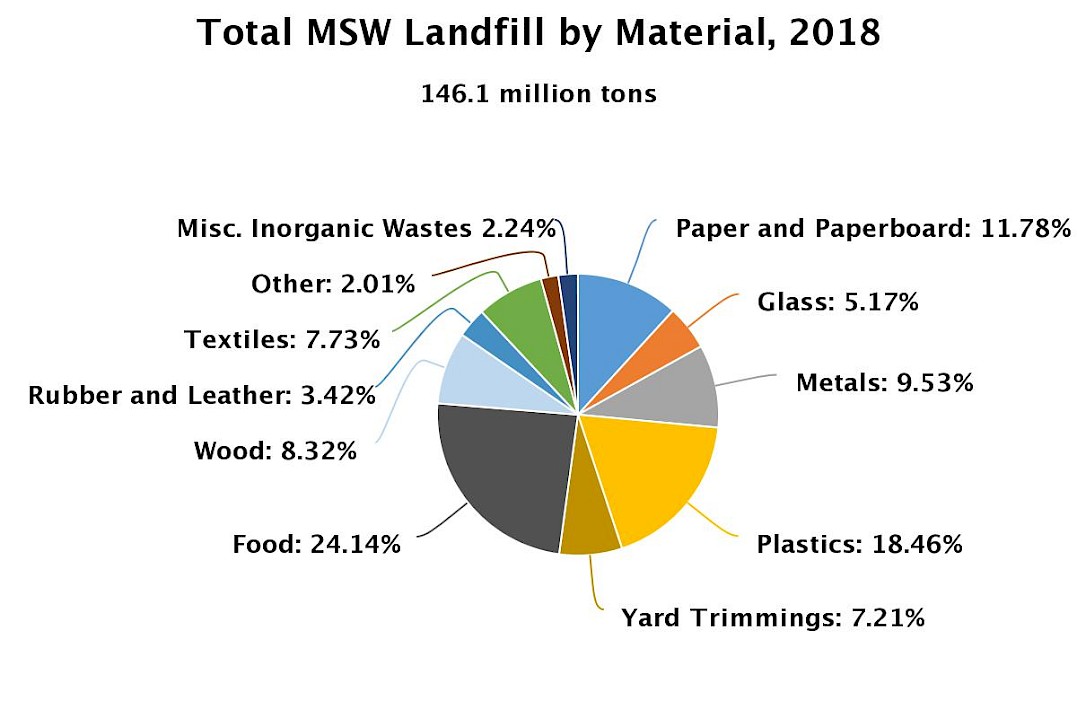 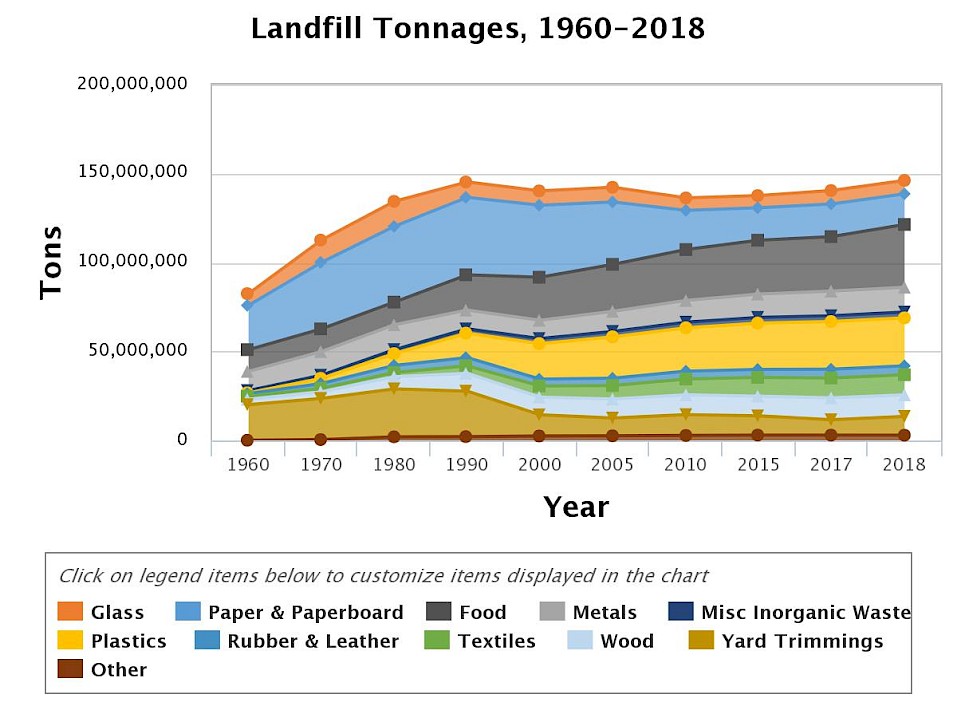 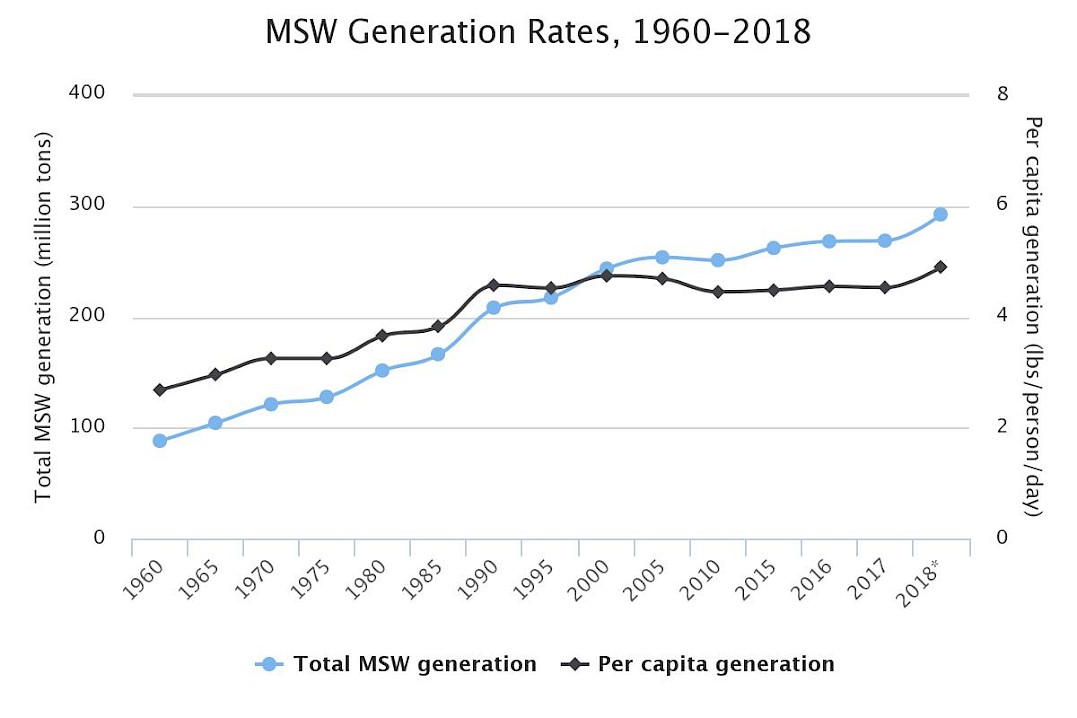 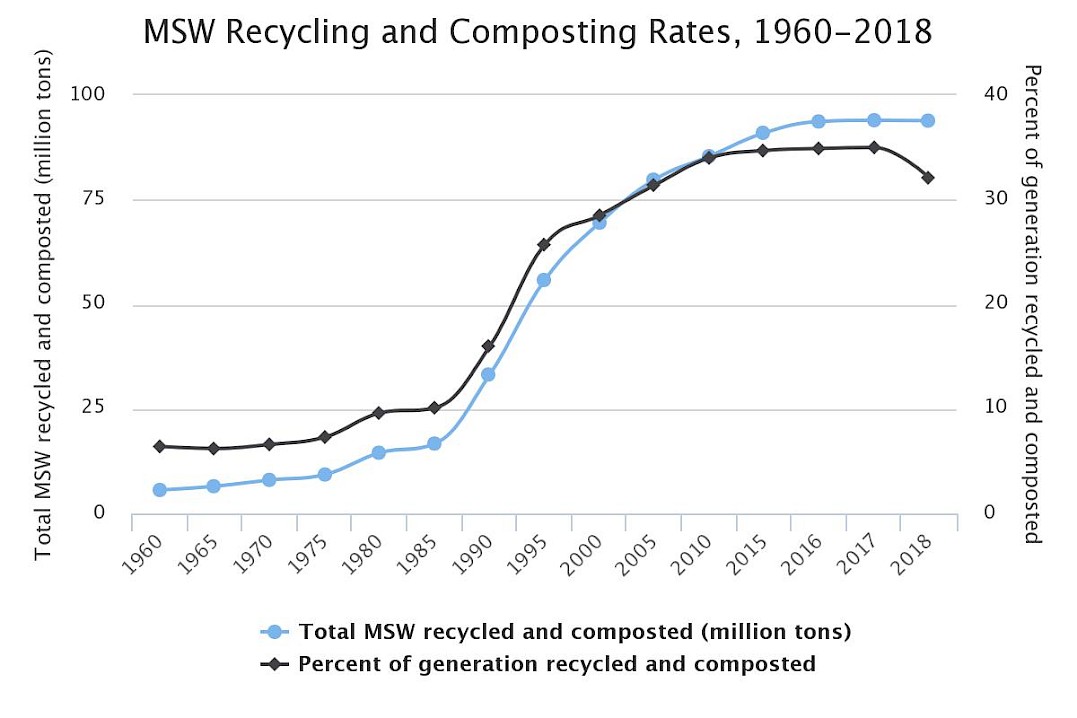 The recycling and composting rates (as a percentage of generation) of the below materials in MSW has mostly increased over the last 58 years. Read over the table below for examples.

Recycling, Composting, and Other Food Management Trends Specific to 2015-2018

Included in the generation number are the almost 94 million tons of MSW recycled and composted and an additional 17.7 million tons of other food management in 2018. The following provides a detailed breakdown of the numbers:

Listed here are the recycling or composting rates for three categories of materials, including paper and paperboard, yard trimmings, and food:

EPA’s report Sustainable Materials Management: The Road Ahead serves as the foundation for the EPA SMM Program. The recommendations and analytical framework under the Road Ahead encourage the consideration of multiple environmental benefits when developing materials management strategies. Currently, EPA has a tool for estimating greenhouse gas reductions resulting from sustainable materials management – the Waste Reduction Model (WARM). This section shows those GHG reduction environmental benefits. The Agency is developing additional tools to provide information on other environmental benefits and will include these tools and data as they become available.

In 2018, the recycling, composting, combustion with energy recovery, and landfilling of MSW saved over 193 million metric tons of carbon dioxide equivalent (MMTCO2E). This is comparable to the emissions that could be reduced by taking almost 42 million cars off the road in a year.

Paper and paperboard recycling, at about 46 million tons, resulted in the largest portion of the total MSW reduction of over 155 MMTCO2E in 2018. This reduction is equivalent to removing over 33 million cars from the road for one year.

The energy and GHG benefits of recycling, composting, combustion with energy recovery, and landfilling shown in the table below are calculated using the WARM methodology. The estimates of MMTCO2E are calculated using WARM, and identify not only the environmental benefits of recycling, composting, and combustion for energy recovery, but also the benefit of not landfilling materials. Numbers in parentheses indicate a reduction in either greenhouse gases or vehicles and therefore represent environmental benefits.

*Includes material from residential, commercial, and institutional sources (except not industrial process waste).
**Includes lead-acid batteries. Other nonferrous metals are calculated in WARM as mixed metals.
†Only includes rubber from tires.
‡Includes collection of other MSW organics for composting.

These calculations do not include an additional 24.9 million tons of MSW that could not be addressed in the WARM model (including 17.7 million tons from food waste managed by means outside of the scope of the WARM model). MMTCO2E is million metric tons of carbon dioxide equivalent. Details might not add to totals due to rounding.

Source: WARM model Version 15. The number of cars taken off the road/year was calculated using the Greenhouse Gas Equivalency Calculator, updated in March 2020.