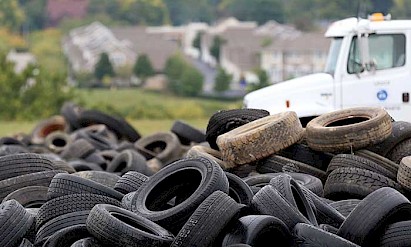 Warren County is seeking for a new way to recycle tires, and during the most recent Tri County Railroad Authority meeting, a few options were discussed.

According to County Executive Jimmy Haley, the existing location where Warren County recycles tires has increased its cost by 40%. Recycling tires with the current company will no longer be cost-effective due to this rise. Because there is already a railroad branch at the area on Belmont Drive, Haley suggested shipping tires to a company in Nashville by railroad.

“We were in discussion with a new tire recycling company out of Nashville which has asked us the possibility of instead of transporting by tractor trailer if we could transport by rail,” said Haley. “We have a spur right there on the property and so we could cut costs and maximize efficiency of loading a whole rail cart full of tires and shipping them maybe once a month rather than once a week in a tractor trailer rig. We could also expand our recycling allowing more commercial businesses and charge more in order to load that railroad car and get to this new purchaser of tires.”

Haley was instructed to submit the information and the company will investigate further. He also stated that the other counties in the Tri County Railroad Authority, Coffee County and White County, would benefit from this. According to Haley, something needs to be done since the county will stop recycling tires if it continues to lose money.

“Our current Liberty Tire as of next month, and I’m sure the same for Coffee County, is increasing their cost by 40%. What we are charging for tires to recycle now we are going to be going in the hole,” said Haley. “We are not going to operate recycling if we are going in the hole with tires so we are trying to expand those operations and be a little more efficient and getting another market for our product and we will be able to, I think, cut some costs by doing that.”

Brooks believes the rubberized pellets are used to fix roads and potholes, and possibly even to pave roadways. Anything, according to Haley, is an option. At the meeting, no decision was made.