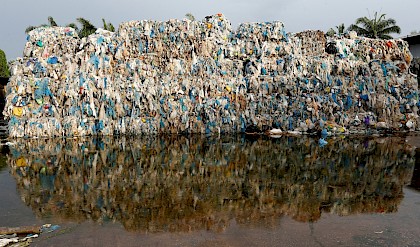 Turkey is choking on vast inflows of garbage from Europe, prompting a looming ban on almost all plastic waste imports.

That could result in more landfilling and incineration.

The Turkish trade ministry announced earlier this week it would ban all polyethylene plastics starting in early July. The plastics, used in countless items ranging from yogurt containers to plastic bottles, account for the bulk of all imported waste.

Simon Ellin, chief executive of the U.K.-based Recycling Association, called the decision a “seminal moment” that could radically reshape the global recycling industry.

“I have no idea where the waste that has been going to Turkey will go now,” said Ellin, adding that it will take years before the U.K. has sufficiently scaled up its own recycling capacity.

“I suspect the next best option in the short term is waste-to-energy,” he said, referring to burning non-recyclable waste for electricity or heat.

EU countries started shifting their waste exports to Turkey in 2017, after China banned the import of many types of plastic. In 2020, nearly a quarter of waste exported by EU countries — some 31.7 million tons — went to Turkey. That’s 20 times more than in 2016, and amounts to some 241 truckloads of plastic waste every day, according to a Greenpeace report published earlier this week.

Under EU and U.K. regulations, plastic waste can only be exported if it is going to be recycled. But Turkey has a recycling rate of just 12 percent, indicating the country “lacks the infrastructure to cope with” all of its imported waste, the Greenpeace report said.

The NGO also found that vast amounts of European plastics are being illegally dumped and burned in Turkey, and that some exporters purposely mislabeled their waste to get around a January ban on the import of mixed polymers and plastics that have to be mechanically processed at specialist recycling facilities.

Ellin acknowledged that some rogue firms have continued illegally exporting waste to Turkey, but he also blamed Turkish authorities for turning a blind eye in some cases.

“There are very good compliant operators that have proper waste management systems out there, but Turkey also has their own illegal facilities that are not regulated. That begs the question if Turkey cannot do a little more about their own operations,” said Ellin.

The Turkish ban could end up giving the bloc’s own recycling capacity a boost — if policymakers seize the moment, industry says.

Currently, only 12 percent of raw materials used by Europe’s industry come from recycling, meaning the EU has to rapidly boost its recycling capacity to meet its ambition of doubling the use of recycled materials this decade.

Introducing a minimum quota on the use of recycled content in plastic packaging — something the plastics recycling industry has been asking for and the Commission is considering as part of its review of EU packaging rules due later this year — could go a long way toward reaching those goals, and building up Europe’s own recycling capacity.

In the meantime, European countries without an alternative to shipping waste to Turkey are likely to rely on landfilling and incineration to treat their waste. And that comes with high climate costs.

“Most European countries don’t have enough facilities to absorb all the waste that would normally go to Turkey. That means a lot of materials will be buried in landfill,” said Vlasis Gitopoulos, a plastic trader in Greece for the Vipa Group. In Greece, almost 80 percent of waste is landfilled. Gitopoulous expects that will climb even higher as a result of the Turkish ban.

There is also a climate impact: Decaying organic waste in landfills generates methane, a potent greenhouse gas. Although atmospheric methane breaks down after a dozen years, its global warming potential can be more than 80 times as powerful as CO2.

By 2035, countries will only be allowed to send 10 percent of their municipal waste to landfills. But many countries, including Greece, are still far from that target.