The US has spent more than $2B on a plan to save salmon. The fish are vanishing anyway 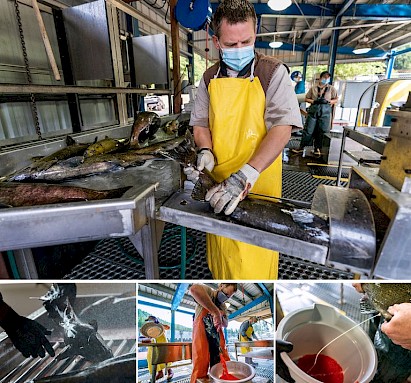 The U.S. government promised Native tribes in the Pacific Northwest that they could keep fishing as they’d always done. But instead of preserving wild salmon, it propped up a failing system of hatcheries. Now, that system is falling apart.

The fish were on their way to be executed. One minute, they were swimming around a concrete pond. The next, they were being dumped onto a stainless steel table set on an incline. Hook-nosed and wide-eyed, they thrashed and thumped their way down the table toward an air-powered guillotine.

Hoses hanging from steel girders flushed blood through the grated metal floor. Hatchery workers in splattered chest waders gutted globs of bright orange eggs from the dead females and dropped them into buckets, then doused them first with a stream of sperm taken from the dead males and then with an iodine disinfectant.

The fertilized eggs were trucked around the corner to an incubation building where over 200 stacked plastic trays held more than a million salmon eggs. Once hatched, they would fatten and mature in rectangular concrete tanks sunk into the ground, safe from the perils of the wild, until it was time to make their journey to the ocean.

The Carson National Fish Hatchery was among the first hatcheries funded by Congress over 80 years ago to be part of the salvation of salmon, facilities created specifically to replace the vast numbers of wild salmon killed by the building of dozens of hydroelectric dams along the Northwest’s mightiest river, the Columbia. Tucked beside a river in the woods about 60 miles northeast of Portland, Carson has 50 tanks and ponds surrounded by chain-link fencing. They sit among wood-frame fish nursery buildings and a half-dozen cottages built for hatchery workers in the 1930s.

Today, there are hundreds of hatcheries in the Northwest run by federal, state and tribal governments, employing thousands and welcoming the community with visitor centers and gift shops. The fish they send to the Pacific Ocean have allowed restaurants and grocery seafood counters to offer “wild-caught” Chinook salmon even as the fish became endangered.

The hatcheries were supposed to stop the decline of salmon. They haven’t. The numbers of each of the six salmon species native to the Columbia basin have dropped to a fraction of what they once were, and 13 distinct populations are now considered threatened or endangered. Nearly 250 million young salmon, most of them from hatcheries, head to the ocean each year — roughly three times as many as before any dams were built. But the return rate today is less than one-fifth of what it was decades ago. Out of the million salmon eggs fertilized at Carson, only a few thousand will survive their journey to the ocean and return upriver as adults, where they can provide food and income for fishermen or give birth to a new generation.

Federal officials have propped up aging hatcheries despite their known failures, pouring more than $2.2 billion over the past 20 years into keeping them going instead of investing in new hatcheries and habitat restorations that could sustain salmon for the long term. At the largest cluster of federally subsidized hatcheries on the Columbia, the government spends between $250 and $650 for every salmon that returns to the river. So few fish survive that the network of hatcheries responsible for 80% of all the salmon in the Columbia River is at risk of collapse, unable to keep producing fish at meaningful levels, an investigation by Oregon Public Broadcasting and ProPublica has found.

These failures are all the more important because hatcheries represent the U.S. government’s best effort to fulfill a promise to the Northwest’s Indigenous people. The government and tribes signed treaties in the 1850s promising that the tribes’ access to salmon, and their way of life, would be preserved. Those treaties enshrined their right to fish in their “usual and accustomed places.” The pacts between sovereign nations did not stop the U.S. from moving forward with a massive decades-long construction project in the middle of the 20th century: the building of 18 dams that transformed a free-flowing river into a machine of irrigation, shipping and hydroelectric power.

Many species of salmon are at or near their lowest numbers on record. Native fishermen say their way of life has been stolen from them and from future generations. But the government didn’t invest in making hatcheries better equipped to grow more resilient and abundant stocks. Instead, officials ushered in endangered species restrictions. They knew that hatchery fish were genetically weaker than wild salmon, so they put limits on the number of hatchery fish that could be released into rivers, where they might spawn with wild fish and weaken the gene pool. These restrictions hampered the productivity of the hatcheries, squeezing tribal fishing even more.

In recent years, salmon survival has dropped to some of the worst rates on record. The numbers of returning adult salmon have been so low that dozens of hatcheries have struggled to collect enough fish for breeding, putting future fishing seasons in jeopardy.

Each passing year of poor returns worsens the outlook for salmon. While salmon runs fluctuate from year to year and this year’s returns have been higher than those of the past few years, human-caused climate change continues to warm the ocean and rivers, and the failure to improve salmon survival rates has left the region’s tribes facing a future without either wild or hatchery fish. Federal scientists project that salmon survival will decline by as much as 90% over the next 40 years.

The federal agencies responsible for more than 200 hatchery programs — including the National Oceanic and Atmospheric Administration, the U.S. Fish and Wildlife Service and the Northwest Power and Conservation Council — have failed to implement recommendations from their own scientists about how to improve outcomes at the hatcheries they support.

Allyson Purcell is the director of West Coast hatcheries for NOAA, which oversees endangered salmon recovery, sets regulations for hatcheries and funds roughly a third of all Columbia River hatchery production. In an interview, she conceded that federal hatchery reform efforts have historically focused on saving wild salmon, but said that her agency is now researching ways to create more resilient hatchery fish.

“As soon as we have actionable science, we will implement changes,” Purcell said. She also acknowledged that hatcheries will need to change to sustain fish populations as the climate continues to change.

“We want to stay nimble,” she said. “In some cases you may want to change the goal of the hatchery. If you find that you need to rely on it to keep a population from going extinct, you’re going to operate that hatchery program differently.”

People like John Sirois, a former chair of the Confederated Tribes of the Colville Reservation in northeast Washington, have been waiting a long time for changes. Nearly a decade ago, he cut the ribbon at the opening of the Chief Joseph Hatchery, 545 miles upriver from the mouth of the Columbia. That hatchery, one of 23 facilities overseen by the Northwest Power and Conservation Council, opened in 2013.

But it is now struggling to return enough fish, and the upper Columbia’s spring Chinook population has fallen to one of its lowest levels on record. Last year the Colville Tribes, whose diet was once as much as 60% salmon, caught less than one fish for each of its 10,000 people.

“Despite all the efforts that we’ve done, the salmon run is looking pretty on the ropes.” Sirois said. “If it’s more difficult for hatcheries to produce salmon, it is the beginning of the end.”

‘A finger in the dike’

There are many reasons that Columbia River salmon die, whether they were born in the wild or in hatcheries. Millions don’t survive their trip down the river, which has become a gantlet of dams and slackwater reservoirs, hot and polluted waters, and invasive predators. Millions more die in the ocean or get snared by commercial fishing ships, ending up as grocery fillets or pet food before they can return upriver toward their spawning grounds.

Some die-off is natural. But the dismal survival rates of salmon bred on the Columbia today are neither natural nor sustainable.

Oregon Public Broadcasting and ProPublica examined the yearly survival of eight Columbia River Basin hatchery populations of vulnerable salmon and steelhead trout, detected at a federal dam on their way out to sea as juveniles and on their way back upriver as adults. This dam-to-dam measure provides one of the only consistent indexes of how well salmon are surviving. But it’s a high-end estimate, because it only measures how well they’re surviving in the ocean. These numbers don’t account for the millions of juvenile fish that die migrating downriver before they’re counted at the dam or the many adults who pass the dam but die before reaching their destination upriver. Our analysis of the publicly available data provides a high-level and easily understandable snapshot of hatchery performance; previously, assessing the health of the hatchery system would have required combing through thousands of pages of government reports and academic research.

Even with this generous estimate, however, the survival rates of these hatchery fish have been well short of the established goals for rebuilding salmon populations, according to the Oregon Public Broadcasting and ProPublica analysis.