The push to scale plant-based plastics 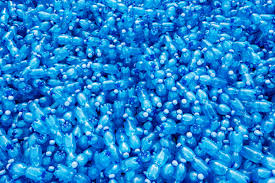 IF YOU ARE wondering what the future of manufacturing looks like, all you need to do is visit the fourth floor of a brick building in the London borough of Camden. There, in a Biosafety Level 2 laboratory obtained from refitting half of an open-plan office, chemists and biologists in goggles and white coats are busy operating bulky machinery and parsing the contents of reactors and vats filled with a thick yellow goo. On the other side of the lab’s thick glass partitions, employees sporting hoodies and eating from Itsu lunch boxes confirm that we are still in the HQ of a London tech startup. Its name is FabricNano.

Born in 2018 courtesy of “startup factory” accelerator Entrepreneur First, the company has set its sights on changing the production of petrochemical-derived and fermented materials—chief among them: plastic—by leveraging biological components. In other words, if FabricNano has its way, companies producing plastic would ditch oil and use proteins instead.

“Big chemical companies, some of which are our clients, want to make bio-based plastics at cost parity with things like PET plastic,” explains Grant Aarons, the company’s cofounder and CEO. “And if you’re using a bio-based plastic, it’s more biodegradable.”

The process for creating products and materials by harnessing enzymes (proteins with the ability to accelerate chemical reactions) is well known: The ubiquitous high-fructose corn syrup that infests US foodstuffs is made by mixing cornstarch with a trio of proteins. “It looks like an assembly line: like, you’re just taking your input chemical, your feedstock. You’re putting it into the enzyme, handing it off to the next one, and making an ultimate product,” says FabricNano vice president for operations Eliza Eddison. “We can’t help but see it like Henry Ford’s assembly line.”

But when it comes to producing more sophisticated materials such as plastic, biomanufacturing falls short. Most of the proteins used to trigger these reactions are destroyed or degraded in the process, making it too expensive to make stuff at scale. It is by addressing that issue that FabricNano hopes to jump-start the industry and make it competitive. The secret, Aarons says, was finding the right kind of support to bind the proteins to. “If you put them physically on to a surface, you change the geometry of the protein,” he explains. “So it changes and it doesn’t work anymore.”

FabricNano’s idea was to bind proteins to strands of lab-made DNA, a material that had never been seriously experimented with in the industry. The team—which at the time still comprised cofounder Ferdinando Randisi, who had studied DNA theoretical biophysics at the University of Oxford—found that, indeed, when bound to a DNA scaffolding, the proteins did not get damaged, allowing them to keep working for much longer, making biomanufacturing cheaper.

“The proteins are not hurt when they sit on the DNA,” Aarons says. The company managed to bring down the cost of DNA production significantly—yet it eventually realized that relying on DNA would always be too expensive for industrial-scale production. Eventually, however, FabricNano found a way to parlay the intuition underpinning its DNA-based work into a method that has the same benefits, but does not require using DNA.

“We were able to move away from DNA and still retain this innovation in this benefit,” Aarons says. “It’s the same principle, but with a different support.” How exactly this system works FabricNano will not say, as the relevant patent registrations have not been finalized yet. But chemical, pharmaceutical, and engineering companies—including chemical giant Sumitomo Chemical America—have already started partnering with FabricNano. “We envision operating effectively at an industrial scale within three years,” Eddison says.