The Keystone XL pipeline project has been terminated. 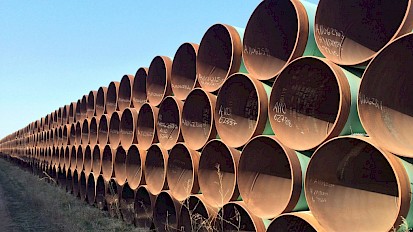 The Canadian pipeline company that had long sought to build the Keystone XL pipeline announced Wednesday that it had terminated the embattled project, which would have carried petroleum from Canadian tar sands to Nebraska.

The announcement was the death knell for a project that had been on life support since President Biden’s first day in office and had been stalled by legal battles for years before that, despite support from the Trump administration.

On the day he was inaugurated, Mr. Biden, who has vowed to make tackling climate change a centerpiece of his administration, rescinded the construction permit for the pipeline, which developers had sought to build for over a decade. That same day, TC Energy, the company behind the project, said it was suspending work on the line.

On Wednesday, the company wrote in a statement that it “will continue to coordinate with regulators, stakeholders and Indigenous groups to meet its environmental and regulatory commitments and ensure a safe termination of and exit from the project.”

Environmental activists cheered the move and used the moment to urge Mr. Biden to rescind the Trump-era permits granted to another pipeline, the Enbridge Line 3, which would carry Canadian oil across Minnesota. Hundreds of protesters were arrested earlier this week in protests against that project.

“The termination of this zombie pipeline sets precedent for President Biden and polluters to stop Line 3, Dakota Access, and all fossil fuel projects,” said Kendall Mackey, a campaign manager with 350.org, a climate advocacy group. “This victory puts polluters and their financiers on notice: Terminate your fossil fuel projects now — or a relentless mass movement will stop them for you.”

On Capitol Hill, Republicans slammed Mr. Biden. “President Biden killed the Keystone XL pipeline and with it, thousands of good-paying American jobs,” said Senator John Barrasso of Wyoming, the ranking Republican on the Senate Energy committee. “On Inauguration Day, the president signed an executive order that ended pipeline construction and handed one thousand workers pink slips. Now, ten times that number of jobs will never be created. At a time when gasoline prices are spiking, the White House is celebrating the death of a pipeline that would have helped bring Americans relief.”

The 1,179-mile pipeline, which would have carried 800,000 barrels a day of petroleum from Canada to the Gulf Coast, had become a lightning rod in broader political battles over energy, the environment and climate change. After environmental activists spent years making the case to President Barack Obama that approval of the pipeline would be a devastating blow to his efforts to fight climate change, Mr. Obama in 2015 announced that his administration would reject its construction permit.

Two days after his inauguration in 2017, President Donald J. Trump, who during the campaign promised to overturn Mr. Obama’s environmental legacy, signed an executive order rescinding Mr. Obama’s decision and allowing the pipeline to go forward. But in 2018, after some portions of the pipeline had been built, a federal judge blocked further construction of the project on the grounds that the Trump administration did not perform adequate environmental reviews before rescinding the Obama decision. The project had been largely stalled since then.