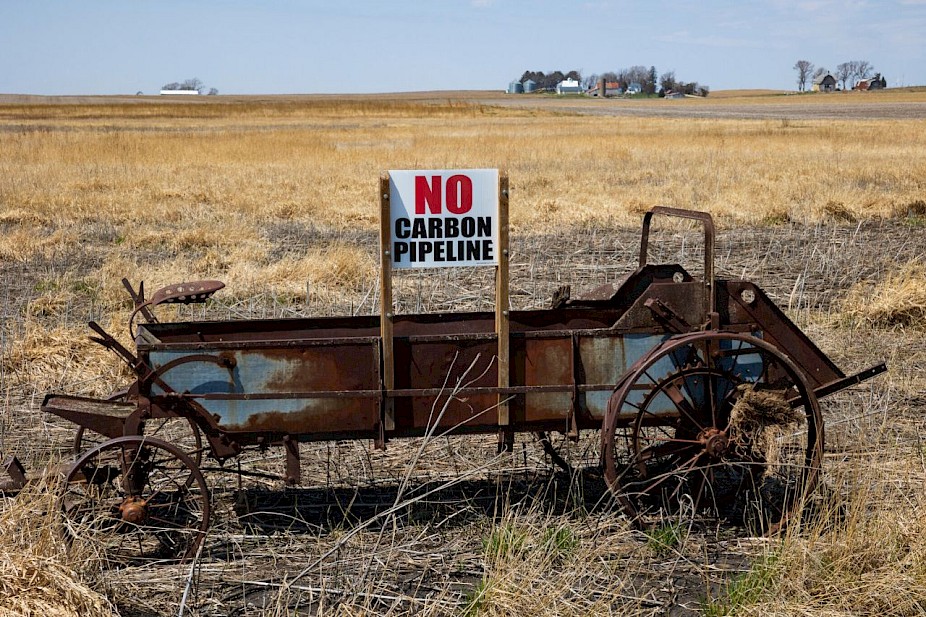 One farmer dogged pipeline surveyors as they traversed his southwestern Iowa fields, peppering them with unwelcome questions about their proposed project. Another cornered Iowa Governor Kim Reynolds at a fundraising event. A third painted “No Carbon Pipeline” on a semi-trailer and parked it at the intersection of two county roads. These and other activists – an unlikely mix of Bernie Bros, Fox News devotees, Women’s March veterans, and at least one Q-Anon follower – meet weekly on Zoom to plot strategy, write letters to the editor, and leave angry voicemails with state legislators.

In a state that ranks number one in corn production, with 57 percent of that crop going to ethanol, rocking the agricultural boat has been, historically, rare. But that era appears to be over. As Jess Mazour, conservation coordinator for the Iowa Chapter of the Sierra Club, puts it, these protests are “the biggest thing to happen to Iowa in a long time.”

At issue are proposals to build three separate pipelines across the state. Each would transport liquified carbon dioxide — collected from the smokestacks of ethanol refineries — to North Dakota and Illinois, where the carbon would be pumped underground and stored indefinitely. The pipeline companies, whose backers include the grain merchant ADM, farm equipment company John Deere, and the oil company Valero — plus the agribusiness millionaire and Iowa Republican king-maker Bruce Ratstetter — claim that carbon capture and sequestration (known as CCS) will help fight climate change by annually removing 30 million tons of atmospheric carbon dioxide across the five-state region where the pipelines will run. That’s the equivalent of taking about 6 million gasoline-powered cars off the road for one year. It will also help Iowa’s corn farmers, they say, by lowering ethanol’s carbon footprint and making the product eligible for California’s low-carbon fuel standard, which was designed to decrease the carbon intensity of that state’s transportation sector and improve its air quality.

But for many Iowans, these “win-win” claims ring hollow. A coalition of about 1,000 people organized by the Sierra Club — about 200 of them meet online weekly — is suspicious of the companies’ motives and concerned about the potential for pipeline leaks, which could send asphyxiating plumes into the air. Farmers fret that burying the pipelines under 50-foot-wide swathes of farmland will compact soil and result in less productive acreage — as happened on land now hosting the Dakota Access Pipeline.

And almost everyone is furious at the prospect of the pipeline companies, should they fail to procure all the land easements needed, petitioning the state to invoke eminent domain. “I sure as hell am not going to sign any easement,” says Tom Honeyman, a farmer in southwestern Iowa. “I’ll go to prison before that happens.”

Beyond the anger and the fear, however, a central question looms: Are the proposed ethanol carbon storage pipelines — which cumulatively run more than 3,300 miles — a sensible tool for decarbonization, or will they just enrich their investors? Finding the answer is crucial because the planet’s temperature is rising, and government incentives for ethanol pipelines are time limited. Without them, pipeline developers will drop out.

In 2018, both the Intergovernmental Panel on Climate Change and the National Academy of Sciences concluded that stabilizing the climate at a livable temperature would require not only massive reductions in greenhouse gasses but also annually grabbing, through 2050, about 10 billion metric tons of carbon dioxide from the air, then removing another 20 billion metric tons a year from 2050 until 2100.

“We have the technology to sequester carbon from power plants,” says Jennifer Wilcox, a chemical engineer who works on decarbonization as the Principal Deputy Assistant Secretary of the Department of Energy’s Office of Fossil Energy and Carbon Management. “We’ve shown that we can do this.” From 2011 through 2014, the DoE, partnering with ADM, captured and stored a total of about 1 million metric tons of CO2 from an ethanol plant in Decatur, Illinois. In 2017, the agency began partnering with NRG Energy and JX Nippon Oil & Gas Exploration to capture more than a million metric tons of CO2 per year from a coal-fired power plant south of Houston. (Most experts, though, say that coal, even paired with CCS, can no longer compete financially with renewables.)

Through the 2021 Infrastructure Law, the Biden Administration allocated $2.5  billion to Wilcox’s office for CCS demonstration projects that will – it is hoped – eventually lower the cost of capturing carbon from industries notoriously difficult, and therefore more expensive, to decarbonize. These include natural gas power plants and cement manufacturers. The latter’s emissions, thanks to China’s economic rise, have more than tripled since the early 1990s, to make up more than 7 percent of global carbon emissions.

What separates those projects from the ones proposed in the Midwest is the difficulty of separating CO2 from the other emissions that belch from industry smokestacks. At ethanol plants the stream of CO2 is relatively pure, so it’s fairly simple to capture. But the emissions of other industries tend to be more heterogeneous, which means it’s more complicated and costly to separate the gasses. Still, even capturing and sequestering CO2 from ethanol plants wasn’t economically viable until President Trump raised the tax credit for CCS from $20 per metric ton to $50 in 2018. Additional tax credits from California’s low-carbon fuel standard made carbon capture from ethanol even more attractive to investors.

While no U.S. natural-gas power or cement plant has successfully buried CO2 outside of a demonstration project, oil and gas companies in many states have, for nearly four decades, been collecting the gas — mostly from long-dormant volcanoes and other natural sources — and injecting its liquid form into nearly depleted wells to coax out the last drops of oil. The process is known as enhanced oil recovery, or EOR.

The process does sequester CO2, but the newly produced oil eventually gets burned, often contributing more greenhouse gasses to the atmosphere than was ever sequestered. And that’s what concerns so many of the Iowa pipeline opponents. “It just seems like the exact wrong thing that anyone would do from a climate perspective,” says Marian Kuper, an Iowa farmland owner who identifies as a liberal Democrat and strongly opposes the pipeline.

None of the pipeline companies have said outright that they will sell carbon to fossil fuel companies for use in EOR. Still, the opposition is suspicious. “Developers can make more money doing enhanced oil recovery,” notes Mazour. This project “isn’t about climate change. It’s not about ethanol. It’s about the owners making money. So I don’t think they would leave [that] on the table.”

John Thompson, technology and markets director of the nonprofit Clean Air Task Force, which promotes CCS as a way to neutralize the greenhouse impacts of fossil-fuel power plants, doesn’t see EOR happening. The pipeline companies, he says, have applied to the Environmental Protection Agency for Class VI saline injection well permits, which allow only for sequestration, not for EOR. Moreover, the pipelines, as currently designed, go nowhere near the type of wells that could use EOR. Says Daniel Sanchez, director of the Carbon Removal Laboratory, at the University of California, Berkeley, “There are no markets and no places where I see enhanced oil recovery really booming in the Midwest.”

Wilcox acknowledges that even if some CCS projects do end up being used for EOR, they will still be sequestering carbon from ethanol refineries, or from cement plants or fossil-fueled power plants – if and when the cost drops. Others insist it makes no sense to support a climate-change mitigation policy that’s tied to increased oil extraction. “It’s the question of, are we going to exploit everything we know about?” says Duncan McLaren, who studies climate change policy as a research fellow at Lancaster University’s Lancaster Environment Centre. “The scientific analysis [to limit global warming] says that lots and lots of oil has got to be left underground.”

The promises of CCS, he adds, make it easier for companies and governments to continue business as usual, instead of doing the hard work of lowering emissions. As Daniel Cohan, a professor of environmental engineering at Rice University, writes in his new book, Confronting Climate Gridlock, the “hopes of soaking up emissions later should not dampen the urgency of cutting them now … But there is a real risk that we will do just that.”

Iowa environmentalists point out that not only will ethanol pipelines prop up the fossil fuel industry, they will also prop up conventionally grown corn, which has its own worrisome environmental footprint. Corn requires large applications of nitrogen fertilizer, which generates nitrous oxide when applied to crops; this greenhouse gas is 300 times more potent at trapping heat than CO2. The fertilizer also runs off farm fields into waterways, where it can foul drinking water supplies and create dead zones further downstream.

The climate benefits of ethanol over regular gasoline are debated in the scientific literature, but the market for this biofuel will surely shrink as more people drive electric cars. Won’t this shift make ethanol pipelines anachronistic? Not completely, says Wilcox, who believes that airline travel and maritime transport will continue to rely on liquid fuels, though she concedes they could be made from more sustainable feedstocks than corn, like switchgrass. “Bioethanol comes with its own baggage, like any solution does,” she says. “But it is part of a portfolio of solutions.”

In mid-June, the Iowa Democratic Party formally opposed carbon capture and its associated carbon pipelines. By the end of that month, Summit Carbon Solutions, the developer closest to moving its proposed pipeline forward, had secured about 30 percent of its route, and Gov. Reynolds had yet to agree to meet with pipeline opponents. Within the next six to eight months, the Iowa Utilities Board will decide whether the pipeline companies can take the land they need by eminent domain.

No matter which way the board goes, opponents will keep fighting, Mazour says, because the pipelines have sparked an important debate. “What’s the future of Iowa and agriculture?” she says. “Is it pipelines and ethanol, or revitalized rural communities and agriculture that feeds us and takes care of that land? The pipelines are forcing us to have critical conversations, and it’s happening among unlikely allies.”